Post-Ordination:
Will serve for two years as an associate pastor at St. Mary’s Student Parish in Ann Arbor, Michigan. 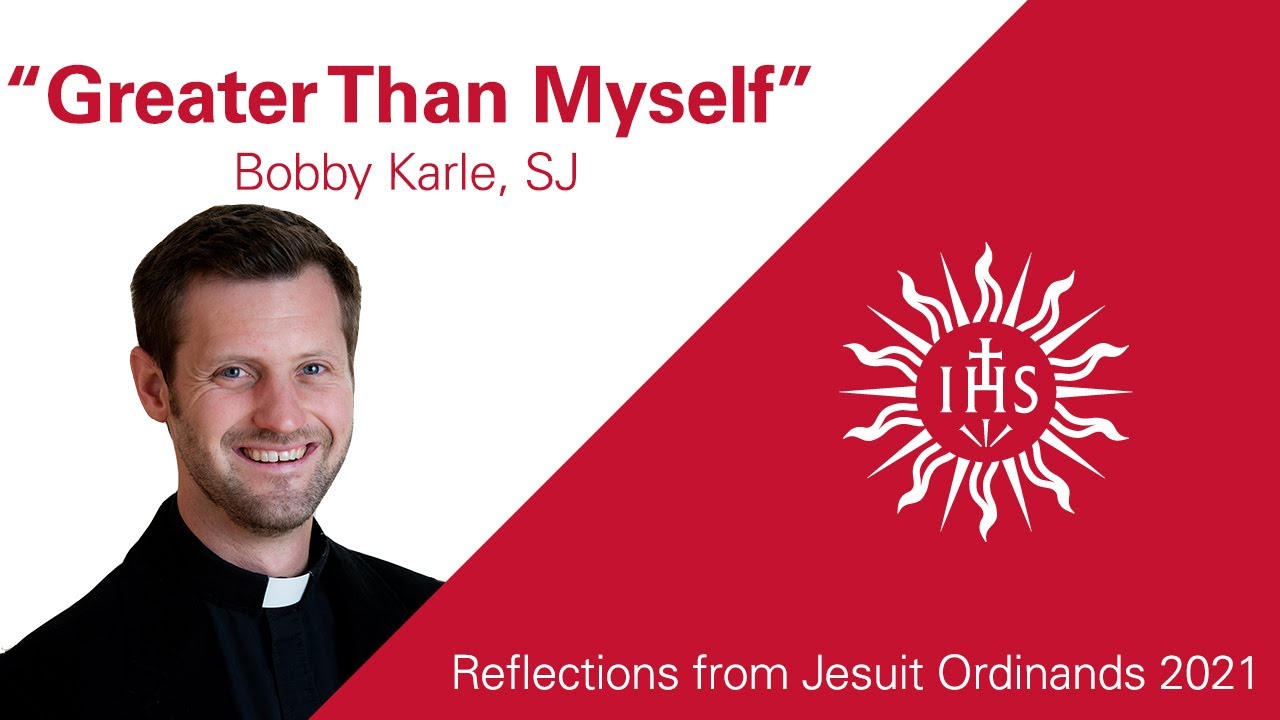 Biography:
Bobby Karle, SJ, was born and raised in Grosse Pointe, Michigan, by his two parents alongside his older brother. He met the Jesuits while he was a student at the University of Detroit Jesuit High School (UofD High) where he participated in campus ministry, community service and the ice hockey program. As a teenager, Bobby attended two Children’s International Summer Village programs in Denmark and Costa Rica. He graduated from DePaul University in Chicago with a major in anthropology and a minor in Spanish, was leader of the DePaul Community Service Association and participated in service-learning programs in Mexico. After college, Bobby spent two years as a Jesuit Volunteer in Belize where he began to discern a vocation to the Jesuits. He next worked as campus minister at UofD High, where he participated in his first yoga class, sparking his ongoing engagement with the practices and philosophy of yoga. He joined the Jesuits in 2010 and, as a novice, performed apostolic work at an ESL school, a L’Arche Community and the Pine Ridge Reservation in South Dakota. He then studied philosophy at Fordham University and engaged in various forms of ministry and communities in New York City. In 2013, he completed a 200-hour Yoga Teacher Training and began teaching yoga at Fordham and a local Bronx food pantry. After graduating from Fordham, Bobby moved to Indianapolis for his regency assignment to teach religious studies and yoga at Brebeuf Jesuit Preparatory School. While in regency, Bobby co-founded the Ignatian Yoga organization, along with a team of lay Ignatian leaders and yoga teachers. Bobby next earned a Master of Divinity at the Jesuit School of Theology of Santa Clara University in Berkeley, California, and served as a deacon at St. Ignatius Parish in San Francisco. After his ordination, he will begin a two-year assignment as an associate pastor at St. Mary’s Student Parish in Ann Arbor, Michigan, in July.

What are three words a family member or fellow Jesuit would use to describe you? (Ask someone.) Do you agree with his or her selections?
Adventurous. Intentional. Community Builder.

These three words are accurate descriptions of who I am, or at least who I strive to be.

Adventurous: I’m grateful for the many unique adventures I’ve had both before and after entering the Jesuits. I love outdoor adventures — running, biking, camping, hiking, snowboarding, rock climbing, stand up paddle boarding — and urban adventures — live music, restaurants and cafes, parks, neighborhoods, etc.

Intentional: I strive to be intentional with how I live and interact with fellow humans and other living beings. I recognize that when I overextend myself, I jeopardize my intentionality. It’s an ongoing process to slow down, enjoy the simple things and be intentional with my words, actions and resources.

Community Builder: I’ve been a connector and an organizer since my childhood days. I love being with people and discovering ways to creatively engage and build communities. I strive to inspire others, both individually and collectively, to find ways to expand possibilities for connection.

Looking back on my last 10 years of Jesuit life, God has clearly used all of my personality traits to mold me in my formation. Introducing my students to new cultures, introducing my fellow Jesuits to new ways of praying and spending time in other countries building friendships with people from dozens of language groups have been such incredible gifts.

What is one hobby you’ve cultivated as a Jesuit, and why is it important to you?
I began practicing yoga the year after I completed my volunteer service in Belize and prior to entering the Jesuits. I love how yoga brought together activities I enjoyed with aspects of who I am — the spiritual, physical, intellectual, communal. The more I practice yoga, the more I discover its worth and relevance to my identity and the world.

A month after I started practicing yoga, I attended a “Come and See” weekend at the Jesuit novitiate to discern if Jesuit life was a good fit for me. That Sunday night, after finishing a wonderful weekend, I attended a yoga class. While I laid in the final resting pose (savasana), I had an experience of being held by Jesus as he wiped the sweat and tears from my face and said, “Trust me, I am with you.” Two realizations came to me: 1. Yoga helped me connect with the deeper, spiritual part of myself. 2. My desire to enter the Jesuits was real, and I needed to trust and believe that this might be a calling from God.

A few years after entering the Jesuits, I participated in a 200-hour Yoga Teacher Training and started teaching “Chapel Yoga” at Fordham University. The Tuesday 9:15 p.m. yoga classes in the chapel provided a very conducive setting to introduce physical and spiritual practices stemming from the Ignatian and yoga traditions. Over the next few years, Ignatian Yoga emerged as an organization, as I teamed up with others trained in these two traditions to offer programs at retreat centers, schools, parishes and online.

What began as a hobby and a physical workout turned into a spiritual practice and ministry that has been a significant part of my Jesuit formation and vocation. I am very grateful to my superiors and to the Midwest Jesuit Province for supporting my yoga training and my initiative to integrate Ignatian spirituality and yoga.

What was one particularly meaningful experience you had during your formation, and why was it meaningful to you?
During my second year of theology studies I had the opportunity to make a monthlong pilgrimage to Southern India. The majority of this time was spent at four ashrams (spiritual centers): Sameeksha Jesuit ashram, Sivananda ashram, Isha Yoga Center and Shantivanam Camaldolese ashram. In many ways, this was a culmination of my Jesuit journey which has allowed for extensive opportunities to study and practice the Ignatian and yoga traditions. While in India, I had the privilege of visiting with a number of Indian Jesuits who have significant training and experience in Christian traditions and Indian philosophies. I was deeply inspired by their commitment to interreligious dialogue, simple living and their close connection to the people in their local communities. It was a very special feeling to be on the other side of the world and to be welcomed as a fellow Jesuit formed in the same Society. Though these men grew up in very different cultural contexts, we experienced the same stages of Jesuit formation, completed the Spiritual Exercises and professed the same vows. In addition to the time I spent in Jesuit communities, it was also exciting to spend time at traditional ashrams dedicated to spiritual formation and practice. At the Isha Yoga Center, I participated in a four-day advanced meditation program that stretched me in new ways physically, psychologically and spiritually. One of the unique aspects of being at Isha was spending time with one of the swamis, who was an alum of University of Detroit Jesuit High and Boston College. He became a swami 10 years ago and has since been living life as a renunciant in the Isha Yoga Center.

After spending four weeks in remote ashrams, I traveled to Mumbai to visit Charlie Rodrigues, SJ, a Mumbai native and currently the Formation Assistant of the Midwest Province, who showed me around the bustling city of 18.4 million people.

My time in India is something I continue to go back to in my prayers. It is a helpful reminder of how the wider world lives, or can live, caring and learning from others despite religious differences.

Who is one important mentor who has accompanied you on your journey? What made them a good mentor?
One important mentor who accompanied me throughout my journey is Fr. Tom Ryan, SJ. I met Fr. Ryan during my first year at the University of Detroit Jesuit High. “TR,” as we called him, taught two of my theology courses and facilitated the weekly CLC faith sharing groups I participated in during my junior and senior years. TR was a significant influence in my early faith formation and walked with me and my family during important and difficult times. I shared with him my joys, fears and struggles with openness and honesty. Although he wasn’t afraid to call me out and offer tough love, he was always on my side. He was especially important to me in 2009 and 2010 when I was going through the candidate and application stages of entering the Jesuits. During various moments when I was uncertain about moving forward with the process, he helped me to deepen my relationship with Christ and to realize that I was God’s beloved child. TR loved being a Jesuit and was so proud that our church was blessed with a Jesuit pope. In his later years, he offered retreats at Manresa Retreat Center and Milford Jesuit Spiritual Center and accompanied many in their spiritual journeys. TR faced his own personal struggles but always maintained a close relationship with Jesus and a strong commitment to his Jesuit life. When he passed away in 2015, it was a huge loss, as I knew he was eager to continue with his vibrant ministry. I am so grateful that I was able to attend his funeral at the Colombiere infirmary in Clarkston, Michigan. I always appreciate times when I can visit his gravesite and I’m able to spend time chatting with him and imagining his jolly laugh and keen insight.