Jesuit Father M. Joseph Casey, S.J., died on March 8, 2019, at Colombiere Center in Clarkston, Michigan. He was 82 years old. Jesuit Father M. Joseph Casey was born on July 6, 1936 in Evanston, Illinois. He entered the Chicago Province of the Society of Jesus on August 8, 1954 at Milford, Ohio. He was ordained on June 8, 1967 at St. Joseph Catholic Church in Aurora, Illinois, and took final vows on September 1, 1973 at Brebeuf Jesuit Preparatory School in Indianapolis.

In 1997, Fr. Casey stopped teaching and focused on caring for Jesuits at Colombiere Center as the assistant superior (1997-1999) and then superior (1999-2005). He then spent ten years in Cincinnati as the associate pastor of St. Francis Xavier Church, before being missioned back to Colombiere to care for his health.

Fr. Casey had three great loves in his life: Jesus (and the Society of Jesus), teaching French, and playing bridge. His jovial attitude, wide smile, and care for others helped him to make friends easily. His dedication and attention to others helped him to maintain great friendships throughout his life — especially with the three Jesuits he played bridge with as often as possible, Bob Welsh, Ted Ross, and Ed Pigott. Fr. Casey was networking long before it became fashionable.

Throughout his life, Fr. Casey had a positive influence on many people — both the young and the old. During the twenty-two years he taught French, Fr. Casey helped many students transition into mature young adults. While superior of Colombiere Center, Fr. Casey cared well for the Jesuits in the community and helped them to deal with the difficulties of aging and preparing for their impending deaths. As associate pastor at St. Francis Xavier, Fr. Casey accompanied countless people in both the joyful and difficult times of their lives especially through the celebration of the sacraments. Even as his health declined, Fr. Casey was able to affect the Jesuits and staff at Colombiere Center with his gracious and joyful attitude. Throughout his life, Fr. Casey was diligent in writing cards, letters, and prayer requests for his friends (and even people he did not know). 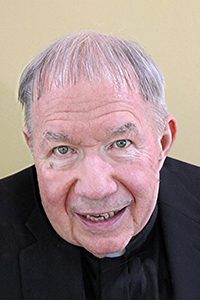