Jesuit Father Robert S. Curry died on Oct. 1, 2019 at the age of 88. He was born in Providence, Rhode Island, on August 31, 1931. He attended Boston College High School and graduated from the College of the Holy Cross in 1953 before entering the Novitiate of St. Isaac Jogues in Wernersville, Pennsylvania. He received his Bachelor of Sacred Theology from Woodstock College and a degree in Linguistics from Georgetown University. He was ordained a priest on June 14, 1964.

After a year of teaching religion and serving as assistant principal for the Bishop’s Latin School in Pittsburgh, Fr. Curry went to Holy Trinity Church in Washington, D.C., where he served as director of religious education. In 1970, he moved north to Woodstock College in New York where he was assigned as Minister and then Superior.

After a brief stint working at the Maryland Province offices in Baltimore, Fr. Curry began what would become a nearly 30-year career serving as a pastor, minister and retreat director. He first served as parochial minister at Old St. Joseph’s Church in Philadelphia, while also volunteering as chaplain for St. Agnes Hospital. Then, following a year directing retreats on the Severn River in Maryland, he returned to Old St. Joseph’s Church as pastor for six years. He then served as pastor for five years at St. Ignatius Church in Baltimore. In 1988, he returned to one of his alma maters, Georgetown University, where he was a minister for three years, before moving father south to Richmond where he became pastor at Sacred Heart Church for four years. His road continued south, heading next to Raleigh, North Carolina, where he dually served for six years as pastor for St. Raphael the Archangel Church and as superior for the Jesuits in Raleigh.

In 2003, Fr. Curry became superior and then director of Manresa Hall Jesuit Community in Philadelphia, and in 2012 served in pastoral ministry for the Jesuit Community at Saint Joseph’s University. 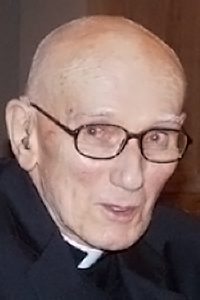