Jesuit Father Paul J. Dugan died May 11, 2019. He was born in South Buffalo, New York, on March 20, 1924, to Simon and Mary Klas Dugan. He attended the LaSalle Brothers’ St. Joseph’s Collegiate Institute, a strong rival for Canisius, the Jesuit high school in Buffalo. However, upon graduation, Fr. Dugan went to Canisius College and there found his Jesuit vocation. After two years at Canisius, Fr. Dugan entered the Jesuit novitiate at St. Andrew-on-Hudson in Poughkeepsie, New York, on June 20, 1943.

In 1947, Fr. Dugan went to Woodstock College in Maryland to study philosophy, and upon completing his philosophical studies in 1950, he moved to Brooklyn, New York, where he taught sophomores at Brooklyn Prep.

Three years later Fr. Dugan returned to Woodstock College, where he studied theology. He was ordained to the priesthood by Francis Cardinal Spellman on June 16, 1956, in the Fordham University Church. After completing his theological studies in 1957, Fr. Dugan spent his tertianship year in Port Townsend, Washington.

It was in 1958, that Fr. Dugan was assigned to teach Latin, English, and religion at McQuaid Jesuit High School in Rochester, New York. After teaching there for seven years, he returned in 1965 to his hometown, Buffalo, New York, where he began his work at Canisius College, service that was to last for 47 years.

Fr. Dugan spent the first five years as a teacher of religion and a moderator of the Loyola Guild and of the Buffalo Jesuit Bureau. But Fr. Dugan’s real talent was with the athletic teams at Canisius. For the next 42 years he was an assistant student counsellor and campus minister to the various college teams. In addition, he served as moderator of athletics, chaplain to the alumni association, and counsellor to resident students.

Whenever there was a game, a match, any kind of athletic event, Fr. Dugan was there, “spreading the joy.” This became his motto. He was loved by students, alumni and faculty, and especially by his Jesuit brothers.

Because of his health, Fr. Dugan moved to Murray-Weigel Hall in the Bronx, New York, in 2012, so that he could receive the assistance he needed. He would always remind his Jesuit brothers of his mandate from the Provincial to “spread the joy,” and that was what he did. 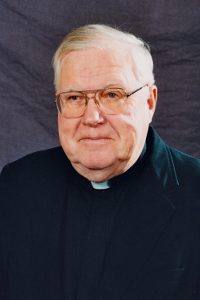