Jesuit Father Robert M. Hanlon died on Sept. 4, 2019. He was born July 25, 1932, in Worcester, Massachusetts, the youngest of three boys and two girls. His father, Edward J. Hanlon, was a plumbing inspector for the city. His mother, Agnes Bridget Cleary, was the organist at Our Lady of the Angels, the parish church where Fr. Hanlon was an altar boy. Both his parents were deeply religious. Fr. Hanlon said he loved his father and adored his mother.

Fr. Hanlon attended local public schools and St. John’s High School. He was a good student with an interest in sports, especially baseball. On graduating from St. John’s in 1951, he commuted for a year to the College of the Holy Cross, where he was in the A.B. Greek honors course. Impressed by his Jesuit teachers, he applied to the New England Province after his freshman year and entered the Shadowbrook novitiate in 1951.

He spent four years in the novitiate and juniorate, then moved to Weston for philosophy studies. He spent regency at Cranwell (1958-1961), the residential prep school for boys, teaching Latin, English, and civics and living as a prefect in one of the student houses.

After the 30-day Spiritual Exercises, he was asked to help the Catholic chaplain at the large Newman Center at U. Mass Amherst. With the Provincial’s approval Fr. Hanlon spent the next year and a half there. This led to the decision to apply to the doctoral program in English at U. Mass., where he wrote a dissertation on the Catholicism of the English novelist Graham Greene, for which he interviewed Greene three times.

He then taught English literature at Fairfield University and at Loyola New Orleans. In the Fairfield years, he began writing novels himself as a diversion. The first was a novel of espionage, The Ransom of Istanbul. He followed it with two more novels, one of them, The Chalice and the Thief, set in the Jesuit community residence at Boston College.

The year 1981 marked a turning point in Fr. Hanlon’s Jesuit life. Up to that point he had developed an interest in working with alcoholics. This eventually became his primary ministry for the rest of his life. A psychiatrist friend had opened a treatment center for alcoholism and other addictions in Pinehurst, N.C. He invited Fr. Hanlon to join him. Fr. Hanlon worked there for five years, as a counselor and eventually as manager (1981-1986). Meanwhile, he was in demand to give twelve-step retreats at the Maryland Province’s retreat house at Faulkner, Md., and also in St. Louis and New York. He found the work gratifying but exhausting. Then, one day on the golf course, a friend challenged him: “Why don’t you quit working with this Gucci crowd and come and work with the poor?” This led to his working for four years with state and federally funded programs in the Jacksonville, Fla., area.

In 1990, he got an urgent request from a fellow New England Province Jesuit, “Jake” Handrahan, to join him as a chaplain at a Catholic hospital in Fort Lauderdale. He remained there for seven years (1990-1997), also helping in a parish in nearby Pompano Beach and continuing his AA work.

Fr. Hanlon returned to the Jacksonville area for the last fifteen years of his active ministry. He regularly offered AA retreats, and assisted weekly in a large parish near St. Augustine, where his homilies, full of frank talk and practical spirituality, were greatly appreciated. His health, however, was deteriorating, especially his eyesight. The Provincial gently nudged him to think about returning to Boston. Finally, in July 2012, “not under duress, but out of necessity,” he returned to Campion Center.

At Campion, he was a good-humored, pugnacious, charitable companion at meals. An avid sports fan, he was a knowledgeable critic of the Red Sox and the Patriots. With zest he dictated a review of his life and ministry for the province’s oral history program. He kept in touch with his Jacksonville friends by phone. 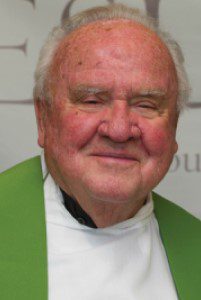