Jesuit Father Edward J. Hanrahan died suddenly on Oct. 21, 2015. He was born in Boston on February 4, 1926, the fifth of seven children of Cornelius and Nora (Mahoney) Hanrahan, who had come from Ireland after their marriage and settled in Boston. His father worked for the post office. When Fr. Hanrahan was quite young, the family moved to West Somerville, Massachusetts.

He attended local public schools, graduated from Somerville High in 1944, and immediately enlisted in the Army, serving in the field artillery in France and Germany during the final months of the war. Discharged in 1946, he worked in the Somerville Post Office for a year and then attended Newman Prep in Boston, to prepare himself for Boston College. There he thought about becoming a priest and was advised to study Latin and Greek at St. Philip Neri, the Boston school Jesuits had started for late-blooming vocations.

In August, 1949, he entered the Jesuit novitiate at Shadowbrook. After philosophy studies at Weston, he taught physics and math at Boston College High School for two years (1956-58) and then did theology studies at Woodstock College in Maryland. He was ordained in Baltimore in 1961. His seriously ill father managed to come to the ordination but died a week later; Fr. Hanrahan’s second public Mass was his father’s funeral. After tertianship at Pomfret, he was assigned for a year to teach physics and math at Boston College High.

In 1964, he was assigned to Boston College, where over the next 22 years he presided over the Office of Resident Students and served as Dean of Students, in effect, in charge of student discipline. In these years, Boston College transformed itself from a mostly commuter school into one with a largely residential student body.

Fr. Hanrahan began with one secretary and eventually presided over a large staff of Jesuit and lay residence life administrators. When he left the Dean of Students’ position in 1986 and moved into fundraising for the university, he found he had a natural client base in alumni who had passed through his disciplinary procedures but remembered him fondly.

From 1994 to 2008, he continued living in the Jesuit Community at Boston College, working in various pastoral ministries. In 2008, he moved to Campion Center, where his health suffered various ups and downs but he remained an active part of the community and enjoyed visits from old friends and graduates he had known as students. 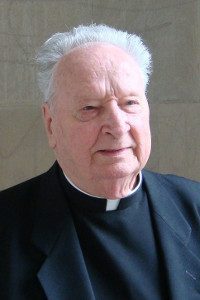