Jesuit Father Harry G. Hock died at Manresa Hall in Philadelphia on April 5, 2019 at the age of 87.

Jesuit Father Harry G. Hock was born in Baltimore, MD on January 16, 1932. He graduated from both Loyola Blakefield High School and Loyola College in Baltimore and entered the Society of Jesus at the Novitiate of St. Isaac Jogues in Wernersville, Pa. in 1953. He received a Licentiate in Philosophy from Loyola Seminary at Fordham University, a Master’s in mathematics from Catholic University of America and a Licentiate in Sacred Theology from Woodstock College in Maryland. He was ordained a priest on June 14, 1964.

Following his ordination and upon completing his education, Fr. Hock was an assistant dean and teacher of mathematics at Wheeling Jesuit University. In 1976, he began what would become a 21-year tenure at Gonzaga College High School, teaching math and serving as school treasurer. In 1997, he headed south to Richmond to serve the Sacred Heart Center as treasurer and to assist with administration. He would remain for 14 years.

Fr. Hock came to the Colombiere Jesuit Community in Baltimore in 2011 where he served in pastoral ministry. He died at Manresa Hall in Philadelphia on April 5, 2019 at the age of 87. 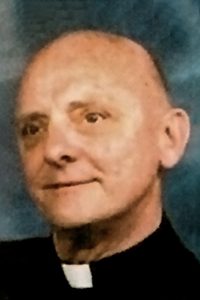