Jesuit Father James B. Reichmann, longtime professor of philosophy at Seattle University, died July 19, 2019, at Sacred Heart Jesuit Center, Los Gatos, California. He was 96 years of age and a Jesuit for 79 years.

Fr. Reichmann was born Jan. 14, 1923, in Everett, Washington, the son of Lindon N. Reichmann and Eva Hale Bell Reichmann. After graduation from Gonzaga High School, Spokane, he entered the Jesuit novitiate at Sheridan, Oregon, in 1940. His Jesuit studies took him back to Spokane (Gonzaga University, BA 1946, MA 1947, Philosophy), to Rome (STL, Theology, Gregorian University, 1954) and again to the Gregorian University for a doctorate in philosophy in 1960. He had completed his tertianship year, 1954-55, as a Jesuit at Le Puys in France, two years after he was ordained a priest in Rome on July 11, 1953.

Fr. Reichmann simultaneously taught at Gonzaga High School and Gonzaga University (1947-50), which at that time shared the same campus. His primary assignment was teaching philosophy at the university level. Except for the period teaching Jesuit scholastics at the former Mount St. Michaels (1962-65), his academic career was spent at Seattle University as professor of philosophy, department chair, and finally, emeritus, for a total of 43 years. He retired in 2013 to a ministry of prayer.

He was the author of Philosophy of the Human Person (Chicago, 1985), Evolution, Animal Rights, and the Environment (Washington, D.C., 2000) and many articles in scholarly journals. A truly dedicated scholar, his final article, published when he was 90 years old was on the philosophy of the renowned Edith Stein, a brilliant Jewish philosopher, who converted to Catholicism, became a Carmelite nun, and was killed in a German concentration campus. Fr. Reichmann, of course, read her in the original German. His students appreciated his teaching and often remarked that they could count on his being “clear and fair.”

Fr. Reichmann was famous, clever and notorious for his puns. He had a fascination, some would say obsession, with numbers. Some typical Jesuit rec room questions might be: “How many fans were at the Mariners game last night?” “Tom, you would know, how many freshmen entered Santa Clara University this year?” or “What do you think is the temperature this morning?” Perhaps by living so much in the philosophical world of abstraction, he needed a numerical grounding.

He was adeptly fluent in Latin, French, German, Italian, and late in life learned Spanish so that he could celebrate Mass for the Hispanic communities in Seattle. He spoke in fluent Latin, as required, when he taught philosophy to the Jesuit scholastics in the early 1960s.

In the summer of 1987, Fr. Reichmann was attending a summer faculty workshop and died. He had cardiac arrest, was out several minutes, but two faculty members, using CPR, revived him. He was actually superbly healthy from then on. He loved swimming in the Puget Sound at Warm Beach and at the Jesuit summer vacation spot at Hayden Lake—a mile each day.

He is survived by his brother, John L. Reichmann, of Cashmere, Washington, and sister, Elizabeth Crowell, of Radnor, Pennsylvania. Funeral services were held at Los Gatos with burial at the Jesuit cemetery at Mount St. Michael’s, Spokane. A special Memorial Service will be held in the Chapel of St. Ignatius once the academic year has begun again. 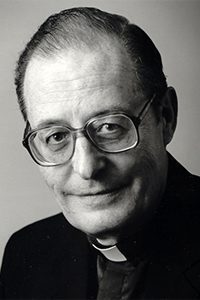