Father Larry Kroker died peacefully on October 6, 2019 at Rene Goupil House, Pickering. He was in his 80thth year and in religious life for 60 years. Larry, the son of Jacob Kroker and Margaret Doucette was born in Jellicoe, Ontario (Thunder Bay District). After high school he entered the Society at Guelph on 14 august 1959. Two years later he pronounced first vows on 15 August, 1961. After juniorate Larry went in 1963 to Mount St. Michael’s in Spokane for philosophy. His two-year regency took place at Loyola High School, Montreal and Brebeuf High School, Toronto. He did theology at Regis College, Willowdale, from 1968 to 1972. His ordination took place at St. Andrew’s Church in Thunder Bay on 5 June 1971.

It was in 1972 that Larry returned to his roots in Northern Ontario and began his life-long ministry to the Indigenous people. He began at Fort William Reserve, next to Thunder Bay. That apostolate brought him to Longlac, West Bay (where he did tertianship in 1976), Spanish, Aroland, Espanola and many other mission stations. Larry pronounced final vows in 1978 and ten years later Larry’s final posting began in 1988 when he settled in Thunder Bay. He was pastor at St. Anne’s Church on the Fort William Reserve and then Pastor of the Kitchitwa Kateri Parish in Thunder Bay; he also served in Armstrong and Gull Bay. In 1989 Larry was appointed superior of the Thunder Bay Mission which then consisted of eight priests and three brothers. One of his sad tasks was to hand over the long-time Jesuit parish of St. Andrew’s to the Diocese.

By the year 2015 Larry was the sole Jesuit in the Thunder Bay District. Then in March of 2018 Larry was diagnosed with serious cancer and began chemotherapy. He was unable to travel to Toronto to receive the St. Joseph’s Award as the Canadian Missionary of 2018 from Catholic Missions in Canada. But later that year Honorary Chief Kroker of Fort William First Nation was aptly fêted in Thunder Bay. Fittingly, the aboriginal name that came with his honorary chief designation in 2011 was Aski Shabwaweshkang — He who goes everywhere.

In an article on Larry in the Jesuit Province blog IgNation he stated: “I came to realize that teaching high school was not my vocation; I was not a natural teacher in that context. And I guess it’s not why I became a priest.’ His formation program included stints as a pastoral minister in native parishes, ‘where I seemed to fit in very well,’ he recalls. About a year after his ordination in 1971, he decided that priestly ministry in that setting was his real vocation. Later Fr. Kroker and others began thinking of ways to heighten the level of native leadership in Catholic parishes. The result of this discernment was, in 1996, the formation of Kitchitwa Kateri Parish in Thunder Bay, which serves Indigenous people who have migrated to or are visiting the heart of the city.”

Larry took the gifts of Jesuit tradition and of the Exercises and offered them to the Indigenous people. He gave the Spiritual Exercises to many and established a CLC. And he began a Native Formation Program which resulted in the ordination of Native Deacons and the permanent mandating of Native women to ministry. He leaves after him a strong, well-formed pastoral team to carry on the Ministry. What is most notable is that Larry was able to inculturate the Catholic Faith for the Indigenous people, so native ceremonies were beautifully woven into the liturgy. And this priest of the people could be found not just in vestments or regalia, but also side by side with them with fishing rod or hunting rifle in his hand. Larry lived the Incarnation.

Would you offer one Mass for the repose of his soul. Members of the Manitoulin District and Thunder Bay Community are asked to offer two Masses. 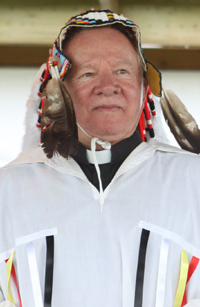