Father Remi Limoges died peacefully on 7 March at Rene Goupil House, Pickering. He was in his 94th year and in his 74th year of religious life. Remi was born on 15 March 1925 in Outremont, Quebec, the son of Joseph Remi Limoges and Marie Estelle McGinnis. He was a student at Loyola High School and College in Montreal for a total of eight years. He did a year of Pre-Med at McGill University. Remi entered the Jesuit novitiate at Guelph on the 30th July 1946. Two years later on 31 July he pronounced first vows and this was followed by a year of juniorate. In 1949 he moved to the seminary in Toronto for three years of philosophy, then on to a three-year regency at Loyola, Montreal. He was back in Toronto in 1955 for theology, Ordination followed in 1958, and a year later he went for a half year to Fordham University in New York to study psychology. Tertianship in 1960 was at St-Martin d’Ablois, France. Remi returned to Montreal as spiritual director of both students and teachers at Loyola. He moved in 1964 to Ottawa to begin a two-year program in psychology, followed by a year of internship at St. Michael’s Hospital, Toronto. In the only break from eastern Canada, he spent 1966 at St. Paul’s College, Winnipeg, as professor of pastoral psychology.

It was in 1967 that Remi began his fruitful association with Regis College, Willowdale as professor of Pastoral Psychology. He was appointed Rector in 1969, a challenging responsibility in a community of 144 Jesuits. He also continued as professor and director of the Pastoral Institute. After five years as rector he was in 1974 appointed Director of Field Education for the Toronto School of Theology.

Remi accepted another Rectorship in 1977, this time at Ignatius College, Guelph, a novitiate community of fifty-five. Upon finishing as Rector, Remi was appointed Socius to the Novice Director in 1985, and later Secretary and Treasurer of the Province. Remi’s final destination in his long Jesuit life was Pickering. There in 2003 he began directing retreats and continued in this ministry until his health brought about a move to the infirmary in 2015.

Remi was very social and well liked. The Charcot-Marie-Tooth disease which affected his mobility never slowed him down. Remi was a great reader and would gladly engage in good conversation. He was a wise counsellor. 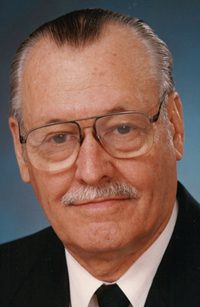