Jesuit Father Doug McCarthy died on August 24, 2019, at Our Lady of Lourdes Parish in Toronto. He was in his 75th year and in religious life for 57 years. Fr. McCarthy, the son of Stephen McCarthy and Anna English, was born in Chatham, New Brunswick on September 10, 1944. After high school he entered the Society at Guelph on August 14, 1962. Two years later he pronounced first vows on August 15,1964. After juniorate he went in 1966 to Mount St. Michael’s in Spokane for philosophy. His regency took place at St. Paul’s High School, Winnipeg, from 1968 to 1970. He moved to Toronto for theology at Regis College, Willowdale, from 1970 to 1974. His ordination took place at Regis on June 9, 1973.

Fr. McCarthy began his priestly life at Ignatius College, Guelph where he spent eighteen years. For ten years (1974 to 1984) he was prison chaplain at the Guelph Reformatory. This suited him well as he exhibited a life-long compassion and concern for the underdog – the poor and homeless people, the marginalized and rejected ones. During this time, he was socius to the Master of Novices (1974 – 76) and Director of the “Red House” (1977 – 80). This was a half-way house where former inmates and fragile and wounded souls formed community with volunteers, with members of the Jesuit Companions Program and with a few Jesuits. Under his direction it became the “Farm Community” (1980 – 87). This project utilized the extensive garden plots and fields where members of the Red House and others worked the land and cared for the farm animals. Fr. McCarthy was appointed Director of Novices in 1983. From this time until 1992 when he left Guelph, he had a significant role in the formation of a generation of Jesuits in our Province.

A move to Pickering brought Fr. McCarthy to Manresa Retreat House where he engaged in the Spiritual Exercises apostolate and also preached retreats from 1992-93. From 1993-99 while still giving Manresa retreats, Fr. McCarthy also lived and worked in a downtown Toronto L’Arche home. Like his work with the poor, the neglected and the dying in Calcutta, where Fr. McCarthy assisted Brother Bob Mittelholz, SJ during the summer of 1972, L’Arche had a profound influence on Fr. McCarthy’s thought and style of life. This may have also prepared him for a completely different ministry which began in 1999, when Fr. McCarthy was assigned to Holy Cross Mission in Wikwemikong on Manitoulin Island. Fr. McCarthy was very happy during his thirteen years in Wikwemikong. There he was the pastor of all four of its churches, Superior of the community of five Jesuits for a time, and so respected and loved by the Indigenous people among whom he was so very inculturated, that they gave him an Indian name – Minowadjmod, “the carrier of the message, always a good message”. Beginning in 2012, Fr. McCarthy was an Associate Pastor at Our Lady of Lourdes Parish, Toronto, where he also helped the Red Cross serve the poor and homeless, where he helped with the All Inclusive Ministries, and where he was always eager to help the many vulnerable people who so often came to the door. Fr. McCarthy was a moving preacher, and people drove across the city just to hear his brief but stirring homilies.

Occasionally Fr. McCarthy would compose articles for the Jesuit Province blog igNation and invariably he wrote about various people he met in the parish precincts – the homeless, beggars, refugees, and the dispossessed of mind and soul. In January of this year he fell on ice while trying to fill his bird feeder and suffered a severe fracture of his ankle. This resulted in surgery and many months of recuperation at René Goupil in Pickering before he was able to walk and so return to Lourdes.

In recent years Fr. McCarthy struggled with personal demons. It was never easy, and like Jesus, he fell a number of times. But with the help of the Society and of good friends, he always got up to resume the priestly ministry which was so much part of who he was. 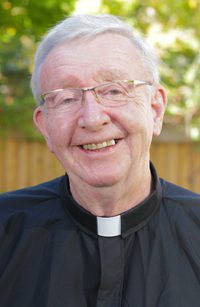