Father Francis Micallef died on April 2, 2019 at 7:15am. He was in his 88th year and was a Jesuit for 68 years. Frank was born in Malta on 17 November 1931 and entered the Society there on 15 February 1951. He began the study of philosophy in 1956 at Heythrop College, England. Frank returned to Malta for one year of regency at St. Aloysius College in Birkirkara. Then in 1961 he returned to England to teach at Mount St. Mary’s College in Derbyshire. Frank arrived in Toronto in 1963 to begin theology at Regis College, Willowdale. He was ordained on 5 June 1965 in Malta, after which he completed the fourth year of theology in Toronto. Frank asked to remain in Canada and so he was applied to the Upper Canada Province.

Frank joined the Royal Canadian Air Force in 1968 as a chaplain. He held military pastoral assignments from 1968 to 1988 in British Columbia, Alberta, Saskatchewan, Manitoba Ontario, and with the Canadian Peacekeepers in Cyprus. He also served as chaplain in the Army and Navy. A position which Frank treasured immensely was the appointment as chaplain to the famous Canadian Air Force Snow Birds flying team. He retired with the rank of Major. Of course, Frank returned to Malta for several visits but was always happy to get back to the military bases in Canada. It is not clear why military life appealed to him; he had a strong curiosity about the Swiss Guards, their rules and way of life.

In 1988, Frank was assigned as parish priest to St. John the Evangelist Church in Waubaushene, Ontario near the Jesuit Martyrs’ Shrine in Midland. Also with that posting was the weekly ministry at St. Francis Xavier Mission on Christian island. Frank enjoyed this parish very much and was well respected and appreciated. He was zealously involved in many of the parish activities and tried to be available to all, no matter what the occasion. So, it was quite a blow to the parishioners and Jesuits when in 1994 he suffered a crippling stroke and was moved to the Jesuit Infirmary at Pickering. His last two decades were quite difficult in many respects; frustration often set in and the staff worked very hard to ease his situation. They loved him, so they tried to respond to his every call.

Before his stroke, Frank was quite energetic, forthcoming, and genial. He loved nothing more than to welcome people, wherever he was, and show them around. He had a childlike disposition which allowed him to be effervescent about small things. When he was studying in the early 1960s at Regis College in Willowdale, he easily managed to insert himself into various groups and brought his own quirky style into their proceedings. He was an easy target of teasing by his peers but took it all rather graciously. As an immigrant to Canada, he cherished his new found land and never regretted joining our Jesuit Province. But, without a doubt, Malta was always the bedrock of his ultimate national allegiance.

Please offer one Mass for the repose of his soul. Members of the Pickering Jesuit Communities are asked to offer two Masses.

Sister-in-law and nephew in Malta 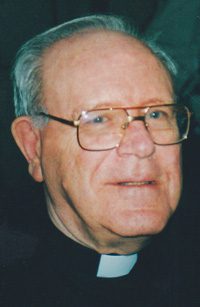