Jesuit Father James W. Moore died Sept. 13, 2019 at the age of 92. He was born in Trenton, New Jersey, on June 14, 1927. He attended Trenton Central High School and in 1946 entered the Novitiate of St. Isaac Jogues in Wernersville, Pennsylvania. He received a B.A. in Latin and a licentiate in philosophy from West Baden College, a master’s in history from Loyola University Chicago, a Bachelor of Sacred Theology from Woodstock College and a master’s in education from Fordham University. He was ordained a priest on June 21, 1959.

Following ordination, Fr. Moore spent a year teaching English and Latin at St. Joseph’s Prep in Philadelphia. He then began what would become a nearly half century of service to Saint Joseph’s University. He started in 1963 at what was then Saint Joseph’s College as assistant dean for admissions. In 1967, he became director of admissions, where he served for 11 years. He then directed the freshman program for three years before serving as associate academic dean for the next 27 years, establishing a loyal reputation as a trusted counselor and advisor to thousands of students.

In 2002, Fr. Moore was presented with the Rev. Joseph S. Hogan, SJ, Award in recognition of his exemplification of Christian principles and outstanding loyal service to Saint Joseph’s University. Upon his retirement in 2008, the University named Moore Hall, formerly Overbook Hall, in his honor. He continued to serve his beloved campus as a pastoral minister until 2012 when he moved to the Manresa Hall Jesuit Community, praying for the Church and the Society of Jesus. 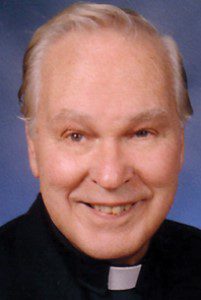