Father Julien NAUD, SJ, died in the infirmary of Richelieu, in the evening of April 8, 2019, at the age of 90, from colon cancer.

Born in Deschambault (Portneuf County) on October 8, 1928, he completed his classical studies at the Séminaire de Trois-Rivières and entered the novitiate at Sault-au-Récollet (in Montreal) on August 14, 1950. He followed the regular cycle of formation of the Society of Jesus for the first four years (novitiate and juniorate at Sault-au-Récollet); but, before philosophy, between 1954-55, he did a year of regency at the Collège de Saint-Boniface (Manitoba), where he was the full professor in the first year of secondary school. He then studied philosophy in Montreal for two years at the faculties of the Society of Jesus in Montreal and completed his regency at the University of Sudbury where he taught philosophy for two years.

He studied theology in Montreal at the Collège de l’Immaculée-Conception and was ordained a priest on June 21, 1962 by Cardinal Paul-Émile Léger in the church of the Immaculate Conception. After his third year at Saint-Jérôme in the summer of 1966, he left for Rome where he studied philosophy at the Gregorian University and presented a doctoral thesis on the French philosopher Gaston Bachelard, titled “L’imagination dans les œuvres de Gaston Bachelard” (Imagination in the works of Gaston Bachelard). On August 15, 1966, he made his last vows in Rome in the presence of Father Pedro Arrupe, the then recently elected Superior General.

Back in Montreal, he began his career as a professor of philosophy at the Jesuit faculties in the fall of 1966. Then, in the summer of 1967, with other Jesuit students, he attended the Faculty of Philosophy of the Society of Jesus, which first joined the Trois-Rivières University Centre and later became a part of UQTR (l’Université du Québec à Trois-Rivières). Julien taught there from 1967 to 2009. In addition to being a professor, he held various positions. He was secretary of the faculty of philosophy from 1969 to 1975 and head of the department of philosophy on a few occasions.

Julien always showed great availability to the requests addressed to him by the Company’s superiors. He was the superior of the Jesuit community of Trois-Rivières from 1969 to 1975 and the head of the formation committee of the Jesuit province for twenty years. He paid great attention to everything concerning intellectual life; as such, he was the initiator, with Roger Marcotte, of thematic meetings at the Barkmere summer house, which became very popular and gathered about twenty Jesuits, young and not so young.

Julien was at the same time a discreet being, of great kindness, always ready to help those who turned to him. On the occasion of his fifty years in the Society, Father General Kolvenbach underlined this in his letter to him: “Your qualities of welcome and listening have enabled many to overcome difficult obstacles during their studies”.

When the Centre Vimont closed in the spring of 2012, he chose to stay in Richelieu with his sick companions. He is survived by a sister (Thérèse), a brother (Gérard), a sister-in-law (Bella Langlais), two nieces to whom he was close (Jacqueline Houle and Marie-Josée Naud) and a great friend (Suzanne Foisy), who stayed with him during his last days.

The body will be exposed in the chapel of the Residence Notre-Dame de Richelieu, before the funeral service, which will be celebrated at 2 p.m. on Saturday, April 13.

The Eucharist will be presided over by the Superior of the Jesuits of Richelieu, Jean-Guy Bilodeau, and the homily will be delivered by Bernard Carrière. 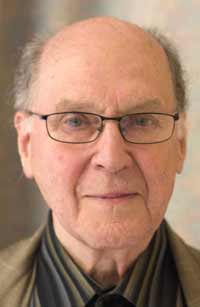