A gentle, holy, happy man of God after the mind and heart of Christ!

Fr. Armand was a Jesuit priest for 75 years; philosopher, theologian, gifted preacher, teacher of prayer, spiritual director, retreat guide, spiritual advisor, co-founder of the Mater Dei Ministry Institute in Spokane – which began in 1981 as a seminary for older vocations- were among some of his contributions and gifts to the Church. His compassion and deep faith shone through his presence. His love of priesthood was palpable. One thing I learned recently is that he gave retreats in India and Italy for Mother Teresa.

I have known Fr. Armand for almost 50 years conducting retreats and days of prayer with him both in CA and outside the state. After he directed our SNJM 30 Day Retreat in Los Gatos in 1972, he encouraged us Holy Names sisters to become Spiritual Directors and givers of Directed Retreats focused on scripture and discernment. Our community leaders encouraged us in this call and we formulated the Retreat Team which served the greater Bay Area with Directed and other retreats for over 35 years. He encouraged and mentored our beginnings. His brilliant intellect and profound mentoring enabled me and many to discover the richness of Ignatian Spirituality and the life of St. Ignatius, the master discerner. To this day my Bible and copy of “Spiritual Exercises of St. Ignatius” by Louis Puhl SJ are covered with his notes of wisdom and examples of the movements of the Spirit. What a friend, mentor and spiritual influence he became for me and so many in my Holy Names Community.

I do want to thank Fr. Armand, in the name of the hundreds of thousands of women religious world-wide whom he invited and empowered to become Spiritual Directors and Retreat Ministers with a Vat 11 theology. He saw the hunger in the people of God. His contemplative and perceptive knowledge of scripture, his devotion to Mary and concern for the poor were contagious. His was a practical theology. He said he never wrote a book but did create over 500 articles on the themes of prayer, discernment, the persons of Jesus and Mary and use of scripture for one’s prayer life. A friend, Rose Marie Doyle told him “We are your books.“ I could not agree more.

A memorable aspect of ministering with Fr. Armand were his constant “surprises of the Spirit”. I remember one day he called and asked if three of us Holy Names sisters would like to hear a talk in SF given to women religious on Discernment? Of course, we were thrilled to go hear this presentation and I offered to drive. On the way, one sister asked who was giving the talks? He replied a wonderful team who truly understood discernment and the Rules of Discernment. We were delighted. A bit later one asked how he selected the group. He responded that the Spirit always informed him. Wow! Well, as we drew closer he told us that we were the group and he would be facilitating it and we were not to worry. I almost drove off the highway!!! What an experience of trust!

Another time, he invited me to conduct an eight- day retreat with him for priests of the Diocese of Beaumont, Texas. I was overwhelmed with this invitation and trying to get out of it said I did not feel ready and at any rate would need to speak with my provincial. He laughed and said that he had already called her and if okay with me she gave her blessing. On the plane going to Texas, I asked how the Bishop and priests felt having a woman director? He said he had not told them but all would be fine!!! I couldn’t believe this and almost fainted. Somehow, he drew from me and others a profound trust in him, belief in the power of grace and his insatiable desire to feed the hunger of the people of God. The Spirit led him. I still have the newspaper clipping of our interview after the retreat. Actually, all went well.

In closing, I want to thank Fr. Armand for the treasury of prayer helps he designed over the years – “In God’s Presence”, “The Examen”, “A Personal Response to the Presence of God”, the “5 P’s of Prayer”, “Suggestions for Family or Group Prayer”, “Some time with Jesus” to name a few. I asked if I could put them into inclusive language and he said he said yes. In retreat ministry today, they are still enormous helps to the spiritual journey of persons seeking a deeper relationship with God and richer prayer life.

When he arrived at Sacred Heart Center from Spokane and realized he was losing his memory, I brought him a folder with two side packets. On one side I put copies of all the prayers I had that he had created. On the other side, I placed photos of him giving retreats to different groups of religious with names of the team members so he could identify them. He looked at the folder and then at me and then again at the folder. He asked, “Did I write all those prayers?” I assured them that he did. “Did I work with all these beautiful sisters?” I assured him he had. He always called us, “God’s beautiful daughters.” I asked him to cherish the powerful ministry of spirituality God so lovingly entrusted to him and when he couldn’t sleep – which was an ongoing pain for him – to look them over and just be with God in gratitude and peace.

Thank God for the gift of you, Fr. Armand!!

Rest now in the arms of your loving Creator, dear friend. 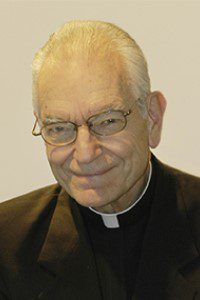