“Hank”, as he was known to his friends, entered the Jesuits in August 1951 after graduating from St. Mary’s University in Halifax. In 1955 he began studies in philosophy in Montreal with the French-speaking Jesuits. He then taught for three years in Ethiopia at Tafari Makonen, the Jesuit-run school in Addis Ababa.

Fr. Nunn went to India in 1960 to teach in the Jesuit schools. He remained in the Darjeeling District for the next 14 years. After first studying Hindi, he then began theological studies. He was ordained in 1964 at St. Mary’s College in Kurseong. Fr. Nunn continued teaching in the Darjeeling Region at St. Alphonsus School in Kurseong and at St. Joseph’s College, North Point, where he also served as principal for five years.

In 1977, Fr. Nunn left Darjeeling and went to Bangalore in southern India as a retreat director and to continue teaching. Fr. Nunn is perhaps best known for his work as co-founder of a center treating young people who suffer from serious mental disorders. In 1979, under his leadership, Fr. Nunn invited a group of international psychotherapists to establish an international community in Bangalore for the treatment of schizophrenia. Fr. Nunn began first as a psychology teacher and counselor and later in 1997 as director of the Athma Shakti Vidyalaya Society,

The Athma Shakti Vidyalaya Society, under the directorship of Fr. Nunn, is a unique therapeutic community. Patients learn through holistic psychotherapy supervision to recognize, develop and use their own skills instead of being dependent on medication for the treatment of schizophrenia. Over the years the centre enabled 40% of the young adults to return to normal life, while another 40% showed marked improvement in their ability to function.

In 2013, Fr. Nunn was recognized by The Times of India as a Bangalore Hero. The same year he published a book about his life living and helping people with mental health challenges called Opening to Trust.

Fr. Nunn’s good works in the service of God will live on. 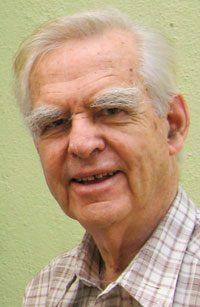