Dick loved Jesus Christ and eagerly encouraged others to encounter Jesus in their lives and ministries.

Let us pray in thanksgiving for the life of our brother, Fr. Richard W. Anderson, SJ, who died on August 10, 2019, at Colombiere Center in Clarkston, Michigan. He was 84 years old. May he rest in peace.

Dick was born on December 28, 1934 in Chicago. He entered the Chicago Province of the Society of Jesus on September 1, 1953 at Milford, Ohio. He was ordained on June 9, 1966 at Bellarmine School of Theology in North Aurora, Illinois, and took final vows on December 8, 1975 in Chicago.

During Regency Dick taught Latin at St. Xavier High School in Cincinnati (1960-1963) and, after ordination (and a year of studies in Religious Education at Fordham University), taught religion at Loyola Academy in Wilmette, Illinois (1969-1973). Dick then focused all his energies — both personally and professionally — on companioning people in the Spiritual Exercises; his primary ministry for the rest of his life.

Dick spent a year (1974-1975) in Cincinnati giving 19th Annotation retreats to staff at St. Xavier High School and the Jesuit Spiritual Center at Milford before moving to Chicago where he was a spiritual director at the Jesuit School of Theology (1975-1981) and was on staff at Claret Center and Institute for Spiritual Leadership (1981-1986). While at the Claret Center, Dick spent two years on sabbatical at the Jesuit School of Theology at Berkeley (where he continued to refine his spiritual directing gifts). Dick spent time as a chaplain at Loyola University Chicago’s (LUC) Rome Center (1986-1989) before working in university ministry at LUC and directing students of Loyola’s Institute of Pastoral Studies (1989-1999). While in Chicago Dick also was the Provincial Assistant for Spiritual Renewal (1975-1980) and the superior of LUC’s Arrupe House Jesuit Community (1992-1998).

After a six-month sabbatical in Boston, Dick returned to Cincinnati for six years as a staff member of the Jesuit Spiritual Center at Milford (while also being superior of the Jesuit community there). After a sabbatical at St. Xavier High School Jesuit Community (2006-2007), Dick returned to his hometown where he was a chaplain to faculty and staff at St. Ignatius College Prep (2007-2018). In 2018, Dick was missioned to Colombiere Center to care for his health and continue to engage in spiritual direction.

Dick was a welcoming, hospitable Jesuit who enjoyed watching movies, reading, and traveling. Sometimes Dick was called “America’s Guest” because of all of the cities — and Jesuit communities — he visited. Dick was a devotee of Fr. Richard Rohr, OFM and would often give Fr. Rohr’s articles/quotes to directees or post them on the community bulletin board.

Dick loved Jesus Christ and eagerly encouraged others to encounter Jesus in their lives and ministries. Most people will remember Dick as a superb spiritual director/companion who listened intently and spoke with wisdom. 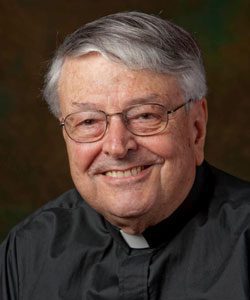