Fr. Claude Roberge was born the eldest of five children in Saint-Ferdinand d’Halifax, Mégantic County (present-day Bernierville in Centre-du-Québec), Canada, on September 10, 1928, and was baptized there the very same day. His was the 9th generation in Canada of a Francophone family fervently loyal to their Catholic and cultural traditions. After graduating from secondary education in Sherbrooke, where his father had moved his business, he studied at the University of Montréal, graduating in 1949. On September 7 that year, he entered the Society of Jesus at the Sault-au-Récollet novitiate for the French-speaking province of Lower Canada. This year marked his 70th in the Society. Though he had not met any Jesuits before applying for entrance, he was drawn to the Society of Jesus “because of its promotion of advanced studies and its international vision extending to missionary countries,” as he himself said.

After first vows he remained two years in the novitiate house for his humanities studies (juniorate, 1951~53) and then went for philosophy to the Immaculate Conception College in Montréal (1953~56). His desire to be sent to Japan was owing to what he called his “spirit of adventure” and recruitment by Fr Lasalle. “It was soon after the Second World War and I thought that, with zealous evangelization, Japan would accept Christianity. My project was to baptize many Japanese and convert Japan!”

He arrived in Japan on March 1, 1956 to begin the usual two-year language study at the Jesuit-run program in Yokosuka (Taura). His year of regency before theology (1958) was spent at Sophia University, teaching English in the university and philosophy in the International Division. The study of theology followed (1959~63) at Kamishakujii in Tokyo, during which he was ordained to the priesthood in St Ignatius Church by Cardinal Doi on March 18, 1962. As was usual in those days, tertianship followed immediately on theology under Fr Karl Reiff in Hiroshima (Nagatsuka), ending on February 3, 1964.

Fr Roberge, already age 35, then went to Paris for special studies in linguistics (1964~66), specializing in new methods of teaching French. He remarked smilingly that, thanks to a course in French pronunciation, “I have lost a little bit of my Canadian accent.” (However, students later complained about his Canadian accent when he was coaching them for speeches or stage roles in French.) While in Paris, he pronounced his final vows at Montmartre on August 15, 1964 and was transcribed into the Japan Province. That was 430 years to the day after St Ignatius and his companions pronounced their first vows there.

On returning to Japan in 1966, he began a long career in Sophia University teaching French in the French Language Department as well as linguistics in the Graduate School of Foreign Languages. He was off to Europe again for a year from May 1970, studying the pedagogy of foreign languages at the Centre Universitaire de l’État at Mons, Belgium. There he got a title allowing him to organize in Japan seminars on audio-visual methods in the name of the French Government’s Ministry of Education.

During his time in France he was impressed by the phonetic methods of some Croatians he met while studying in Besançon. They directed him to a seminar on the Italian island of Ponza, where he became acquainted with the “Verbo-Tonal” methodology of Petar Guberina of Zagreb University in Croatia (then part of Yugoslavia). He enthusiastically felt that here was something he could use for language teaching. Professor Guberina invited him to study in Zagreb (1965). This encounter later gave birth to his initiative in founding the Sophia Research Center for Hearing and Speech Disorders, of which he was the Director from 1978 to 1996. This Center was the origin of the current specialized graduate Research Program of Speech Pathology.

The following is from a letter he wrote explaining his work to Acting-Provincial Alfonso Nebreda on October 4, 1983.

I came to know the work of Professor Petar Guberina of Zagreb University from the time I went to study in Europe after my tertianship. Back in Japan, I was busy teaching French, publishing, trying to finish a PhD thesis and dealing with students (we had student instability from 1968 to 1972). However, I was in fact using Prof Guberina’s method to teach French, write articles, and give lectures.

Then around 1971-72, I started to feel this way: “If I don’t do anything for the deaf people, who in Japan will help them?” … Guberina and his followers were so busy creating the Verbo-Tonal Method that they did not bother either to write or publish. They 4 were verbal people not only in theory but in practice.

Anyhow, one day I made one request for money to invite Prof Guberina to Japan, another for machines, and a third for space. Everything was granted either by Sophia or by external organizations. …

It is not an easy task to evaluate this kind of work, but here are a few points. It has:

His original intention to convert Japan hit an obstacle when he noted that the few persons whom he actually baptized did not continue their Catholic life after baptism. It was then that he thought of another approach to the Japanese, through academic competence. True enough, once he had acquired his skills, his vigor in the classroom and his enthusiasm for his BIBI LOLO teaching methods were legendary and influenced many people—as did the regular ski tour which he organized for students and professors.

Aside from his classes in Sophia, he also lectured for five years at the Tokyo University of Foreign Languages, and one year each at Gakushuin University and Fukushima University. On reaching the age of 65 in 1993, he asked to be released from full-time teaching in the Department of French Language and Studies for reasons of declining health (lack of energy to continue teaching first-year students) and to dedicate more time and energy to help people suffering from hearing or speech disorders and to train speech therapists. He was prevailed upon, however, to continue with some lecturing until reaching age 70 during the 1998 academic year.

He was in inveterate publisher. First of all, his role as co-author of several dictionaries can be mentioned. In 1970 he contributed with others to a 3-volume Gendai Furansugo Kiso Kobun (Basic Patterns of Modern French). He worked with Fr Paul Rietsch and others in producing a Dictionnaire des Mots Functionnels in 1975, another des Mots Synonymiques in 1978, a third des Prépositions Françaises in 1983, and one in Japanese entitled Fransugo Wafutsu Hyogen Jiten (French Dictionary of Japanese and French Expressions) in 2001. The next year, 2002, his name was at the top of other contributors to 21 Seiki Fransugo Hyogen Jiten (Dictionary of French Expressions for the 21st Century).

The following are indicative of his practical implementation of VT skills: VT-ho ni yoru Eigo Hatsuon Shido Kyohon (Textbook for Guiding English Pronunciation Using the VT Method)—Nursery rhyme prosody affectivity finger action (with cassette tapes, 1985), Shistugosho no Chiryo (Treatment for Aphasia, 2000), and Robe Sensei to Hajimete no Eigo (Beginning English with Professor Robe[rge], 2010). There were also five other, more theoretical publications concerning the VT Method (in 1973, 1979, 1990, 1994, and 2012), not to mention numerous articles helping to make the VT Method known in several European languages. Many of these studies were collected in a single volume entitled Rétrospection, published in Zagreb in 2003. Articles stemming from his research continued to appear in the annual Bulletin of the Sophia University Foreign Language Department and in Sophia Linguistica. An article destined for the 2019 issue of Sophia Linguistica was found on his desk after his death.

After retiring from the university, besides continuing his research in linguistics, he taught elementary school girls at Caritas Gakuen in Kawasaki for five years and lectured at Ake-no-Hoshi Junior College in Urawa for two years, and in 1998 was invited to establish a Verbo-Tonal Institute in Kanto Gakuen Junior College in Tatebayashi, Gunma Prefecture. He served as Director there from 1998 to 2003 and worked mainly with speech-impaired children three or four times a week. In November 2000, he was invited by Halla University in Seoul, Korea, to start a Verbo-Tonal Institute there for speech impaired children beginning in September 2001 while continuing with his work in Tatebayashi. It would take too much room here to enumerate all the domestic and international groups to which he belonged or which he served as trustee.

Fr Roberge had a serious case of diabetes, which eventually affected his eyesight. In 2004 he underwent a serious operation for cerebral hemorrhaging in the eyes at Toranomon Hospital, Tokyo. Despite declining health, however, he was given permission by his doctor and superiors to travel to Zagreb in May 2006 to take part in a symposium celebrating the achievements of the late Professor Guberina and to give three short lectures on his research, and again to give two seminars in Taiwan in December 2007.

During his years of retirement in SJ House, he was also conducting a program called “Fr Roberge’s English Teaching Method for Children,” using the nursery rhymes, songs, and bodily gestures which he had long been using to arouse interest and produce the desired linguistic effects. These sessions continued even after his move to the 24-hour care center, Loyola House, in Tokyo in September 2013. Because of his diabetes he had to undergo dialysis 3 times a week for 4 hours each. In April 2018 he was hospitalized for a cerebral stroke in Nerima Juntendo Hospital. On returning to Loyola House he was somewhat paralyzed on the right side and his speech was unclear. Sadly, after having helped so many people with speech rehabilitation, he himself found difficulty speaking intelligibly.

He was hospitalized again in July for 2 weeks in Musashino Red Cross Hospital for fever and pneumonia resulting from digestive disorder. After returning to Loyola House he was no longer able to continue dialysis and on August 9, 2019 he was quietly received into the hands of the Lord. Chronic kidney failure was given as the immediate cause of death. Now, surely, in the presence of the Lord and the company of the saints, he is recounting the story of almost 91 years on earth in his characteristic French-Canadian accent.

Fr. Roberge was always a loving, dynamic, and practical person, finding ways to put what he had learned into use, not only in teaching but also in helping speech impaired persons, especially children. One message he left us can be summed up in the words of John’s First Epistle: “Let us love in deed and truth and not merely talk about it.” (1 John 3:18) The gospel passage read at his memorial Mass on August 20 was also quite apposite, in which, reacting to one of Jesus’ miracles, the people said, “He has done everything well. He even makes deaf people hear and mute people talk.” (Mark 7:37) 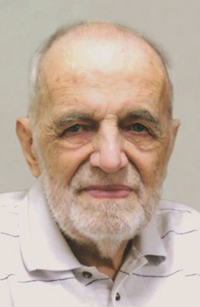