Jesuit Father Jean-Marie Rocheleau died on May 20, 2019, in the infirmary of Richelieu. He had attended the funeral of Fr. Gilles Morissette two days earlier. The next day, at Mass, he had felt unwell and, the very next day, he died early in the morning.

Jean-Marie was born on October 21, 1917, in Saint-Paul d’Abbottsford (Rouville County). He completed his high school studies at the Seminary of Sainte-Croix (in Saint-Laurent), which he continued later at the Seminary of Saint-Hyacinthe before entering the Society’s novitiate at Sault-au-Récollet on August 14, 1935. After his first vows, he followed the Jesuit’s regular formation (including three years of philosophy). During his regency, he taught high school for one year at Collège Brébeuf and for two years at Collège Saint-Ignace in Montreal. He then studied theology at the Collège de l’Immaculée-Conception and was ordained a priest on August 15, 1948 by the Archbishop of Montreal, Mgr Joseph Charbonneau. After spending his third year in Mont-Laurier in 1949-50, he stayed there for a year to prepare himself to accompany the Spiritual Exercises before beginning the ministry that would occupy a very large part of his apostolic life.

He was considered to have fragile health. This is why his superiors first entrusted him with ministries that seemed better suited to his physical condition. Recently relocated to Pierrefonds, he stayed for two years at Villa Saint-Martin giving weekend retreats to lay people and helping the priest of a nearby parish. He then spent one year at Collège Saint-Ignace as spiritual father of the students and history teacher, as well as another year in the novitiate as socius of the novice master. From 1955 to 1966, he was assistant to the prefect of the Gesù church while hosting the “Radio Sacré-Cœur” programs, which were broadcast on nearly 50 radio stations in French Canada.

In 1966, he spent a few months taking courses in pastoral theology and preparing to devote himself to the ministry of the Spiritual Exercises, which he had long wanted to turn into his main activity. He worked for a year, with a few Jesuit companions, in a spiritual centre that the diocesan authorities of Saint-Jérôme had set up in a vacation spot in the Laurentians (L’Estérel), but that did not really succeed in taking off.

From 1967, he had established himself at the Centre Vimont where he remained until the residence closed in 2012. It was from that time on that he dedicated himself to giving the Spiritual Exercises to religious sisters, especially in Quebec. In one year, he could accompany 20 8-day retreats and 3 30-day retreats. At the beginning of each year, he would send the Province’s secretariat his “apostolic itinerary” for the year, which included the names and addresses of the religious houses where his retreats would take place. He also sometimes reserved a few weeks in the summer months to replace chaplains at nuns’ houses.

Despite what his superiors had thought at the beginning of his apostolic life, he was able to remain in good physical condition and maintain his health, even in the last days of his life. With a clock-like regularity, he would go for long walks every day and swim regularly until a very old age. At Villa Saint-Martin, where he had been living since the closure of the Centre Vimont in 2012, he worked diligently in the garden, during both winter and summer, as an assistant to snow removal workers and especially to gardeners.

On July 31, 1985, on the occasion of his 50 years of life in the Society, Fr. Kolvenbach, the Superior General, wrote to him: “To review your journey in the Society, your life seems quite simple. Almost from the beginning, it has been a pastoral ministry that has been yours, and almost always the ministry of retreats. From the outside one cannot say anything, not that there would be nothing to say, but the King’s secret must not be disclosed”.

He is survived by many nephews and nieces and many people who kept in touch with him until the end: former students of the Collège Saint-Ignace and religious whom he accompanied spiritually until very recently. 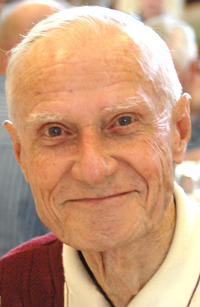