Fr. Richard J. Ryscavage, SJ, died on April 26, 2019, at the age of 74. He was born in St. Clair, Pennsylvania, on March 25, 1945. He attended Nativity High School in Pottsville, Pennsylvania, and after graduating from Assumption College in Worcester, Massachusetts, with a degree in Foreign Affairs, he entered the Society of Jesus in 1967 at the Novitiate of St. Isaac Jogues in Wernersville, Pennsylvania. Following a year doing social work in Guatemala, he received his MA from Boston College and a Master of Divinity from the Weston Jesuit School of Theology. He was ordained a priest on June 4, 1977.

Following ordination, Fr. Ryscavage went on to receive his Ph.D. in International Relations from Tufts University in Medford, Ma. He began work in 1987 with the United States Conference of Catholic Bishops (USCCB) as an advocate for refugees while teaching at Georgetown University. He served the USCCB for two years as the Deputy Director of Migration and Refugee Services and four years as the Executive Director. He also served as President of the Catholic Legal Immigration Network at the USCCB.

In 1994, Fr. Ryscavage traveled to the UK where he spent three years leading the Pedro Arrupe Tutorship in Refugee Studies at Oxford University. He then returned to Washington, D.C. to serve four years as the Director of Jesuit Refugee Service/USA. Following a brief sabbatical, Fr. Ryscavage began a 12-year tenure as a visiting scholar at Fairfield University. While there, he was appointed official adviser to the delegation of the Holy See and participated as one of the Vatican representatives in the “High Level Dialogue on Migration” convened by the UN Secretary General.

In 2016, Fr. Ryscavage spent a year teaching economics at Catholic University of America and then joined the faculty at Georgetown University’s Institute for the Study of International Migration. 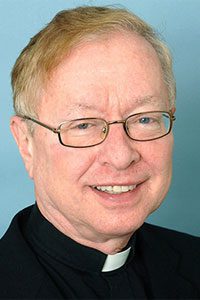