Br. Sebastian A. Boccabella, SJ, was born in Brooklyn to Carmen and Marie (Gesualdi) Boccabella on September 4, 1931. At the age of 19, he entered the Society of Jesus at St. Andrew-on-Hudson (July 14, 1950) as a novice Brother. After pronouncing his vows in 1952, Br. Boccabella worked for one year as an assistant painter at St. Andrew. The next year he worked in the infirmary there, thus beginning a career in health care that lasted 34 years.

In 1968, Br. Boccabella moved to New York City, living first at Nativity Mission Center (1969-76) and then at Xavier High School Community (1976-88). At various times during those years he worked as a nurse in Columbus Hospital, served as a private duty nurse, was assistant director of school food management for the New York Archdiocese, and worked at the Catholic Medical Mission Bureau. It was in 1987 that he began catechetical ministry, first working as coordinator of Religious Education at Our Lady of Esperanza Church.

A year later he moved to Fordham University, where he became assistant minister at Loyola Hall and took care of the sacristy. In 1990, Br. Boccabella became coordinator of ministry at Fordham Prep, and in 1994 he also managed the bookstore. He continued to work at the Prep as Campus Minister until 1997, when he moved to Murray-Weigel Hall. There he did local catechetical work.

In 1999, Br. Boccabella moved back to Loyola Hall to be sacristan and assistant house postmaster. When Loyola Hall closed in 2012, he moved with the community to Kohlmann Hall, which had become part of the Murray-Weigel Community. His health slowly deteriorated and in 2017 he moved to Murray-Weigel Hall to get better medical care.

Br. Boccabella had a great devotion to the Eucharist and to Our Lady. No matter how ill he felt, he would make sure that he spent time in prayer and attended Mass. May his good soul rest in peace. 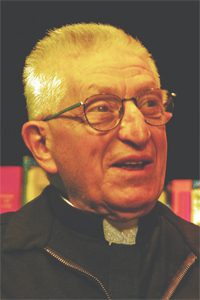