Ultimately, ecological transformation begins at a local level. This goal encourages communities to take action first in their neighborhood ecosystems through grassroots campaigns and collaboration.

Empower and form your community for action with this Ignatian toolkit.

If you’ve spent enough time in Ignatian spaces, you probably know the timeworn catchphrase, “contemplation in action.” In hundreds of letters to early Jesuits, followers and friends, St. Ignatius stressed this concept as the key to living a Christ-inspired life. He taught that our interior spiritual lives should inform the choices and actions of our daily lives and vice versa.

According to Ignatius, love is the driving force from contemplation to action:

Love ought to manifest itself in deeds rather than in words. … love consists in a mutual sharing of goods, for example, the lover gives and shares with the beloved what he possesses, or something of that which he has or is able to give; and vice versa, the beloved shares with the lover. Hence, if one has knowledge, he shares it with the one who does not possess it; and so also if one has honors, or riches. Thus, one always gives to the other. (“The Spiritual Exercises”)

Loving action  can take many forms. But at its heart is mutuality — an understanding that giving of oneself betters the whole.

Each of us has unique gifts to contribute to our communities. When we share our talents and resources with our local communities, we can undo our current social and ecological crisis.

In Camden, New Jersey, for example, a majority-Black community organized to ban 18-wheeler trucks on local streets. For years, this neighborhood was a throughway to state highways, and the subsequent diesel pollution had caused higher rates of asthma and other health issues. After securing a city ban on truck traffic in their neighborhood, the Camden community joined statewide efforts to ban truck traffic in residential areas.

This community effort had a measurable impact on neighborhood health and led to other environmental revitalization efforts such as urban farming. It also united and empowered the community. Our communities stand to gain a great deal from collective action based in love.

With members of your household, community or institution, discuss the fruits of your prayers and how they might point you toward concrete action. Consider these reflection questions for guidance:

According to some estimates, Indigenous communities manage and conserve 21% of Earth’s biodiversity. The majority of these regions are categorized by the UN as being in “good ecological condition.” Rather than extracting natural resources, Indigenous wisdom and traditional land management practices prioritize living in right relationship with ecosystems.

But Indigenous lands are often threatened by development — from forest clearing in the Amazon rainforest to mining and oil pipelines in the U.S. Since 2015, a copper mining company has been attempting to establish a mine in Oak Flat, Arizona. Oak Flat is sacred land to the Apache People. The proposed mine is so large and deep that it’s likely to collapse the hills of Oak Flat, destroying a site where the Apache have held ceremonies for centuries. Alongside the Apache Tribe and other activists, Brophy Prep, a Jesuit high school, is fighting the mine. From running a 188-mile relay to advocating with local and federal representatives, a group of Native students at Brophy has engaged in a yearlong campaign to raise awareness about Oak Flat and the mine.

Contemplation and Political Action: An Ignatian Guide to Civic Engagement

Facilitate discussion and community action with this guide from the Jesuit Conference. Check out the section, Our Planet Is in Peril, for ecology specific discussions.

Want to take your ecological activism to the halls of power? Read this resource from the Ignatian Solidarity Network (ISN) and the Jesuit Conference on how to conduct advocacy visits with elected officials.

How are Jesuit institutions taking action? 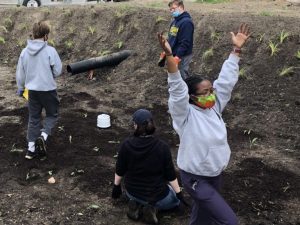 Send us a brief email, telling us how you and your community are walking the path of renewal. We may feature your story on this page or on our Twitter, @JesuitJustice.