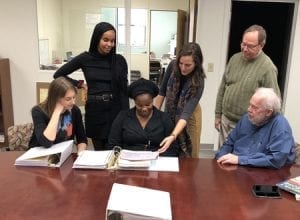 The Slavery, History, Memory, and Reconciliation project is an initiative of the Jesuit Conference of Canada and the United States. Our office is in St. Louis, where we work in close partnership with Saint Louis University. We are also partnered with the St. Louis African American History and Genealogy Society in our research efforts.

The Society of Jesus relied on the labor of enslaved people globally, almost from their founding. In colonial North America, and, over time, in the United States, their involuntary labor helped establish, expand, and sustain Jesuit missionary efforts and educational institutions until the abolition of slavery in 1865. Jesuits in the colonial period held people in bondage in what are now Maryland and Pennsylvania, Illinois, and Canada and the Great Lakes region. In the nineteenth century, the labor of enslaved people supported Jesuit missions, churches, and schools in Maryland, Pennsylvania, Missouri, Kentucky, Louisiana, Alabama, Illinois, and Kansas. Georgetown University, Saint Louis University, and Spring Hill College relied directly upon enslaved labor, as did colleges in Kentucky and Louisiana that are now closed.

We, the Jesuits, deeply regret our participation in this evil institution. No one today can reconcile these actions with the current teaching of the Church or with our commitments as Jesuits, but they are an undeniable part of our history. We are called now to an intentional response: one that foregrounds the lived experiences of enslaved people, acknowledges the legacies of Jesuit slaveholding, and is made in collaboration with descendants and those in our communities who continue to suffer from the consequences of slavery.

We began by conducting extensive research with an intentional focus on the lives of enslaved people. This ongoing process of creating a more complete picture of the past has enabled us to trace family lineages and connect with descendants, so that they can be at the table from the beginning of conversations about how Jesuits and their institutions should act to repair the damage done by slavery.

Working in close partnership with descendant communities will enable us to address the persistent vestiges of Jesuit slaveholding that manifest in our schools, universities, and parishes. We are committed to a cross-institutional approach that includes and invites contributions from multiple stakeholders, including descendants and descendant communities, community members, scholars, Jesuits, and Jesuit schools, ministries, and parishes.