Augustine Queen and His Family

Augustine (also known as Augustus, or by the nickname “Gustin” or “Gustine”) Queen was born around the year 1826 to Jack and Sally Queen, a couple enslaved to the Jesuits at their White Marsh plantation in Maryland. In 1829, when Augustine was about three years old, he, his parents, and his siblings, along with the family of Proteus and Anny Hawkins, were forced away from their extended family network in Maryland to labor at the Jesuit mission in Missouri. They traveled by steamboat down the Ohio and Mississippi Rivers before landing in Missouri and arriving at the Jesuits’ St. Stanislaus seminary in Florissant.

Augustine grew up on the Jesuits’ Florissant farm alongside members of the Brown, Hawkins, and Queen families, kin he and his family had been separated from in 1823 when the Jesuits first forced three couples to leave Maryland and join them in establishing the Missouri Mission. At St. Stanislaus, enslaved people cooked, did laundry, and sewed for the Jesuits and farmed on the plantation.

When the Jesuits assumed administration of Saint Louis College in 1829, they began to transfer enslaved people back and forth between the plantation in Florissant and the college in Saint Louis. After he reached young adulthood, Augustine became one of the people frequently transferred to labor and run errands and messages between the college, the College Farm, and the Florissant plantation. Augustine became skilled in carpentry and records at Saint Stanislaus mention him making brooms and building a gate. He likely worked alongside other enslaved people and Jesuit novices to construct and maintain buildings at the novitiate and on Saint Louis College’s campus. Augustine may have learned these skills from people like his father Jack Queen, Isaac Hawkins, or other enslaved craftsmen forced to help build structures at the seminary, including a white stone building known as the Rock Building that still stands today.

The Jesuits forced their enslaved people into lives of arduous labor and struggle, and yet Augustine and his family members found ways to resist their enslavement by building and maintaining networks of kinship and community. With his family, Augustine attended services at St. Ferdinand Parish in Florissant, where he received his first communion in 1836 and was confirmed on May 3rd of the same year alongside Peter Hawkins. Both boys received a cap, pantaloons, a jacket, and vesting to wear for their First Communions. With his family, Augustine enrolled in several religious associations at St. Ferdinand, including the Confraternity of the Rosary. Worship services provided enslaved people in Florissant time off from labor to gather socially and spiritually. After their long hours of unrequited labor, many worked late into the night to earn money they could use to buy fabric to dress in their finest clothing when they gathered for Mass on Sundays. When Augustine was twenty, his relative Elizabeth Queen chose him as a witness to her marriage to Allen Harris. By 1849, Jesuits converted the second floor of a building at Saint Stanislaus into a chapel for enslaved people. Though this limited how often the families at Saint Stanislaus could join their enslaved and free neighbors at St. Ferdinand, people of color built shanties in the woods near the Jesuits’ property in order to be closer to the families enslaved to the Jesuits and attend services with them.

In 1845, Augustine served as a witness to Mary Hoppins’ marriage to Gabriel Hawkins (Queen) alongside Gabriel’s relatives Liza Hawkins (or Queen), Susan Hawkins, and Joseph Hawkins. Gabriel, like Augustine, was enslaved to the Jesuits, and Mary was enslaved to Major Sabordi. Mary and Gabriel were only married for about four months before Gabriel died. Mary’s owner later sold her to James H. Lucas, vice-president of Saint Louis University’s Medical College in the 1850s and 1860s. By 1849, Augustine and Mary had decided that they wished to marry, but several obstacles hindered them: they were not permitted to marry without the permission of their respective owners, and as long as they remained enslaved to different owners, they faced the possibility of having to live apart, or even possibly being separated, should one of their owners relocate or sell them.

Augustine Queen appealed to the Jesuits’ regard for the sacrament of marriage, and their prohibitions against separating enslaved families, to secure permission from the Jesuits to marry Mary and persuade them to purchase her. However, Mary’s current owner apparently expressed resistance to the arrangement, but eventually relented. John Anthony Elet, leader of the Missouri Vice-Province, sent Augustine from Saint Louis University to the superior of Saint Stanislaus in Florissant with this note in hand:

The bearer of this note, Gustin, yr coloured carpenter, may be, and is hereby permitted, to marry Mary, Gabe’s widow, all difficulties on the part of Mr. Js Lucas having been removed. Mary will be permitted to stay where she is at present until she asks herself to be removed. At any time she wishes to be sold to us, & we are prepared to buy her, she may be purchased."

Augustine and Mary Hoppins Hawkins Queen married on February 17, 1849, in Florissant. Peter Hawkins; Augustine’s sister, Sarah Ann Queen; and Louise, a woman enslaved to Mother Clark of the Sisters of Loretto, who resided on the grounds of the Convent at St. Ferdinand, were the witnesses. Since Mary’s owner, James H. Lucas, was a faculty member of Saint Louis University, Augustine and Mary may have been able to live together or near one another in the city or on campus. However, on July 24, 1849, Lucas sold her to Colonel Henry Bainbridge, who was stationed at Jefferson Barracks, making Augustine and Mary’s ability to stay together more tenuous.

Knowing that Bainbridge’s military duties had him frequently on the move, Mary, Augustine, and Augustine’s Jesuit owners feared that the couple would be separated should Bainbridge move or sell Mary. Accordingly, on December 11, 1849, the Jesuit Consultors of the Missouri Vice-Province decided to purchase Mary in order to keep the family together. The money they used to purchase Mary, however, had been obtained from the proceeds of tearing another family apart by sale.

Augustine knew Peter Queen, the man whose sale enabled his wife to remain with him. He stood as godfather to Gabriel, Peter’s son, in October 1847, before Peter was sold away from his wife, Marian, and three young children in 1849 to labor at the Jesuits’ St. Joseph College in Bardstown, Kentucky. Peter ran away while in Bardstown and was caught, imprisoned, and then sold away from the Jesuits altogether as a punishment. It is unlikely he saw his family again.

With the proceeds of Peter’s sale, the Jesuits of Saint Louis University purchased Mary from Bainbridge on October 28, 1850, for $600, and together Mary and Augustine were transferred back to St. Stanislaus in Florissant shortly thereafter. They had a child together, whose name is not known and who died in March 1851, likely in infancy. The following month, on Easter Sunday, April 20, 1851, Mary Hoppins Queen was baptized in the chapel designated for enslaved people at St. Stanislaus.

By the late 1850s, anti-slavery agitation and sectional tensions were rising, and an increasing number of enslaved people began to pursue their freedom. Expressing their discontent about their enslavement at Saint Stanislaus, members of the Queen and Hawkins families, including Augustine and Mary, convinced the Jesuits to permit them to hire themselves out in Florissant and Saint Louis and receive a cut of the pay. From about 1856 into the 1860s, Augustine and Mary came and went from Saint Stanislaus into the city, hiring themselves out at Saint Louis University and in the vicinity to raise money to purchase their freedom.

In 1863, after African American men could be enrolled in the draft during the Civil War, Augustine Queen registered for the draft while he was a resident of 1110 N. 19th St., but does not appear to have served.

By 1865, Augustine lived in freedom in downtown St. Louis, close to his newly-free kin. What became of Mary is unclear, but it appears that she died. Between 1873 and 1878, Augustine lived at 1112 Madison (in 1873 listed as 1113) and employed himself as a laborer, probably in the carpentry trade. He joined his brethren in worshipping at St. Elizabeth Church, the first Black Catholic parish in St. Louis, when it opened in 1873. There, he married Lucy Smith on April 19, 1881, with his sister Louise Marie Queen and her son Frank Turner as the witnesses. The following month, on May 8, Lucy Ann Smith Queen was baptized into the Catholic Church at St. Elizabeth, with Augustine’s sister Louise Marie Queen as her sponsor. 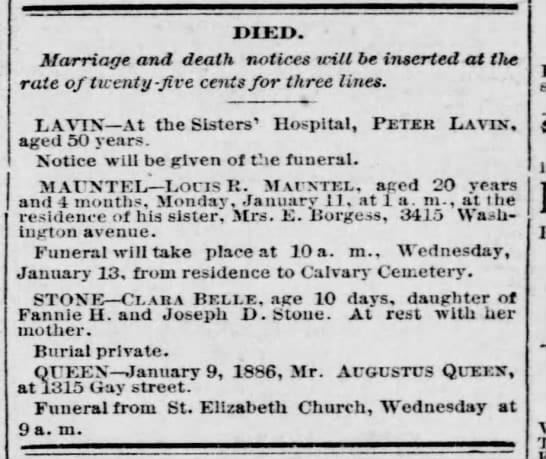 To learn more about our efforts to connect with descendants, please click here. If you think you may be a descendant, we invite you to contact us at shmr@jesuits.org or 314-758-7159.