What We Have Learned

St. Mary’s College in Lebanon, Kentucky developed in 1821 on the site of an abandoned distillery on a farm purchased by Rev. Charles Nerinckx. Father William Byrne, a diocesan priest and its founder and president, ran the college, which was supported by enslaved labor. Enslaved people sustained the school during the 1820s, performing domestic labor and working the college’s farmland. By 1830, the coerced labor of seven adults and children supported the college. Byrne contracted cholera while administering last rites (a sacrament of healing administered to people who are sick or elderly) to Phyllis, an enslaved woman belonging to two lay teachers at St. Mary’s College, who was near death with the disease. Both Phyllis and William Byrne died.

Jesuits of the French Province of Lyon took over St. Mary’s College and its seven enslaved people around the time of Byrne’s and Phyllis’ deaths in 1833. Phyllis was one of the many enslaved people who belonged to Clement and Mary Hill, who taught at St. Mary’s College. When their son, Walter, came of age, he went to school there, and worked alongside enslaved people to pay his tuition. Hill later attended Saint Louis University, where he decided to become a Jesuit. Hill, who supported the South’s right to secede during the Civil War, taught at St. Joseph’s College and Saint Louis University as a Jesuit, and later was president of Xavier University in Cincinnati.

Students like Walter Hill were often assigned to work alongside the enslaved people at St. Mary’s College. The Jesuits of St. Mary’s College prided themselves on the work ethic of their students. Since the time of Father Byrne, it had been a rule to support the cash-strapped college through manual labor once a week. It is important to note, however, that students were treated much better than were bondspeople. Students worked for shorter amounts of time and were assigned less intensive labor. Moreover, students were free to avoid their work, and while they might face consequences for doing so, those consequences would be less severe than those leveraged against enslaved people.  Students were asked “to work upon the college farm in plowing, driving teams, chopping and sawing wood, assisting in harvesting and engaging in any other species of manual labor incident to life upon the farm.” Enslaved people and students hewed trees to make fences and pens, raised cattle and horses, and tended to the cornfields under the supervision of Brother Corne, and later Brother Ladore, the farm’s superintendents or overseers, who dictated their tasks for each day. In 1838, the Jesuits expanded the college farm with the purchase of a neighboring farm.

Enslaved people also cleaned and laundered for the Jesuits and their students, and supplied them with their meals. Michael Nash, a Jesuit priest at St. Mary’s College, commented in 1843 that, “Hog killing time was a feature of every year. During this time our negro cooks gave us fine specimens of their culinary skill. They served us pork in every style, together with the inevitable, but always relished ‘Corn-dodger;’ and we grew healthy and contented on the plain but abundant fare.” In the spare moments they could manage, bondspeople likely sought time to tend to their own garden plots, where they produced potatoes and cabbage to feed themselves and sell for some income.

Census records indicate that 17 enslaved adults and children labored at St. Mary’s College in 1840, though only the names of Rachel and Teresa are currently known with certainty. Another account, written by a Jesuit, suggests that a man named Basil, his wife, and their 5 to 6 children were at least temporarily gifted to the college from a slaveowner in Tennessee at some point between 1840 -1844. However, certain aspects of the Jesuit’s account lead researchers to be uncertain of its accuracy.

On Sundays and holy days, enslaved people at St. Mary’s College went to Mass at the nearby St. Charles Church with their owners. Occasionally, services were held in the chapel of St. Mary’s College. People enslaved to the Jesuits took these Sunday opportunities to intermingle with neighboring enslaved people who also attended services with their owners. Rachel and Teresa were both godmothers to several children born to enslaved parents on other plantations.

In 1846, the Jesuits left St. Mary’s College to take over St. John’s College in New York (now Fordham University). Julian Delaune, a diocesan priest who came from Madison, Indiana, took over administration of the school, including the ownership of three enslaved people the Jesuits had left there. He solicited the Congregation of the Holy Cross in Indiana to help run the college. Over time, St. Mary’s College was passed into the care of other diocesan priests and religious orders. By 1850, the college, under the leadership of Rev. J. B. Hutchins, again owned 17 enslaved people. St. Mary’s College closed in 1976.

Research on the enslaved people at St. Mary’s College is ongoing. We do not yet know much about what their lives were like, and we are still working to trace the genealogy of their descendants. We will continue to update this page as we learn more. If you believe you are a descendant of people held in slavery at St. Mary’s College, we invite you to contact us.

Click on the image below for a PDF with information on determining if you are a descendant of the people Jesuits held in slavery at St. Mary’s College: 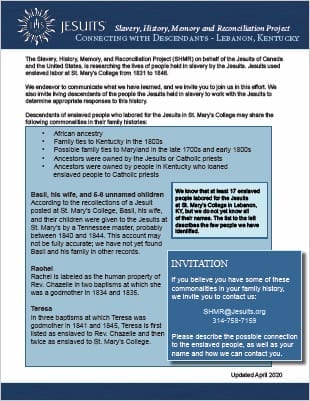 This research was compiled by Kelly L. Schmidt.