October 8, 2019 — Ahead of the World Day Against the Death Penalty on October 10, Catholic and secular groups across the U.S. are mobilizing to prevent executions at the state and federal level. Advocacy at the federal level is particularly urgent, as the U.S. Department of Justice recently announced it would resume capital punishment after a 16-year hiatus, scheduling five executions. With the first execution scheduled for December of 2019, advocates are calling for a permanent end to the death penalty. Several members of Congress have introduced a bill to repeal the federal death penalty.

In the U.S., where the death penalty is in effect at the federal level, in the military and in 25 states, executions remain frequent. Twenty-five people were executed in 2018 — making the U.S. the nation with the seventh highest rate of prisoner executions.

For the Catholic Church, ending capital punishment is an urgent priority, according to Pope Francis. Last summer, Francis spoke out to condemn the death penalty in all cases, noting that church teaching in this area has “matured.”

“For believers and non-believers alike, every life is a good life and its dignity must be guarded without exception,” Francis told the World Congress Against the Death Penalty. “The death penalty is a serious violation of the right to life of every person. … I encourage governors and all those with responsibilities in their countries to take the necessary steps towards the total abolition of the death penalty.”

Members of the U.S. Ignatian family have been particularly outspoken about the need to abolish the practice.

“The death penalty is an affront to human dignity and the sanctity of life,” said Fr. Timothy Kesicki, SJ, president of the Jesuit Conference of Canada and the United States. “As Pope Francis has said, capital punishment has no place in the modern world and is contrary to Catholic teaching. It is vital that members of the Ignatian family continue to see the face of Jesus in those who are imprisoned and to work and pray for the abolition of the death penalty in the United States and around the world.” 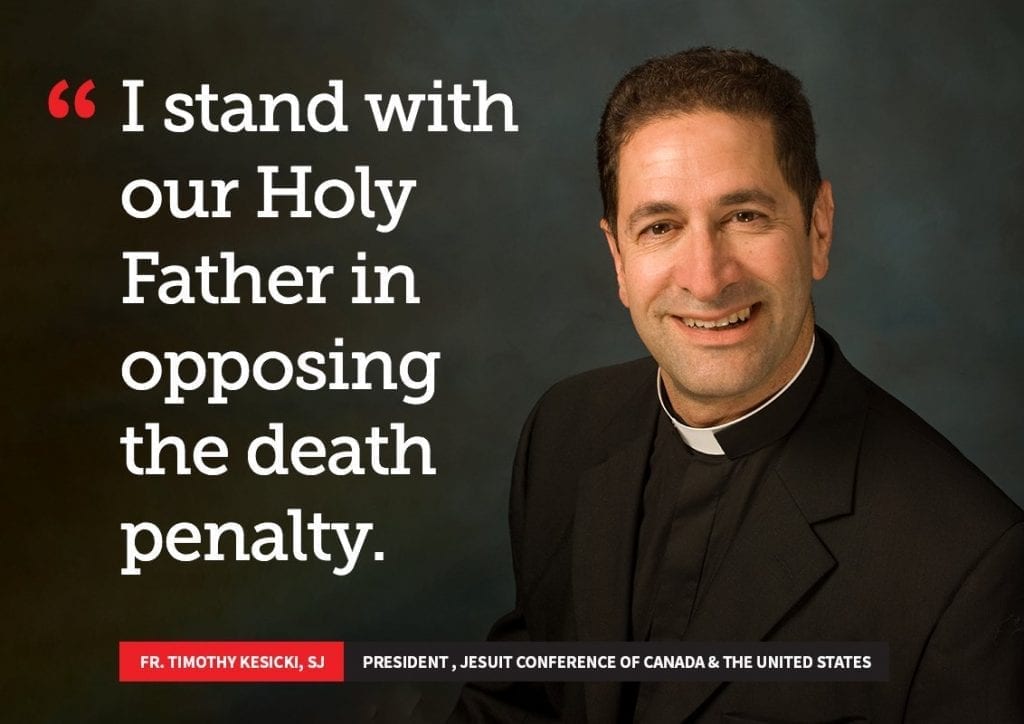 In California, home to the largest death row in the country, Fr. George Williams, SJ, works with those condemned to death at San Quentin State Prison — men whom he says society has cast to its very furthest margins. As the prison’s Catholic chaplain, Fr. Williams offers a “ministry of reconciliation” to 100 of the nearly 700 men on San Quentin’s death row.

“Even if I can’t personally stop the death penalty from happening, I can certainly be a minister of reconciliation for the men I’m working with, reconcile themselves with God, with their victim’s families,” Fr. Williams said. “They’re still human beings. I think that’s the bottom line. We’re dealing with men who are human beings just as we are, who are created in God’s image.”

“It is so human, it is so fundamentally human, to be with people who are as challenged as they have been by their situation and yet find strength and grace,” Starr, executive director and co-founder of NCIP, says. “To know that somebody is doing these extraordinarily long amounts of time and enduring horrible consequences for something that they did do is horrible, but think about what it’s like for something that they didn’t do. We continue to fight to achieve justice on their behalf, and it is wonderful to be a part of that, to achieve that kind of justice.”

According to Starr, NCIP’s work directly relates to anti-death penalty advocacy. As NCIP’s court successes have grown, staff members have increasingly trained their focus on policy work, advocating for legislation that addresses the root causes of wrongful convictions. Recently, their fight to change the standard for how newly discovered evidence is applied in criminal cases helped overturn the conviction of a death row inmate in California. Nationwide since 1973, 166 people have been released from death row because of newly presented evidence of their innocence, according to the Death Penalty Information Center.

“I think that the death penalty abolition movement can point to innocence cases as one of the reasons why we shouldn’t have a death penalty,” Starr explains. “For those that don’t accept the moral argument, showing that our system makes mistakes gives many people pause.”

In the wider Catholic community, the grassroots Catholic Mobilizing Network (CMN) harnesses the voices of thousands of Americans opposed to the death penalty to achieve abolition at the state level. Through letter writing campaigns, educational outreach and coalition-building, CMN has helped successfully abolish the death penalty in seven states. When the Justice Department announced the five federal executions in June, though, CMN’s anti-death penalty work was catapulted to the national level.

Now, CMN is taking on the federal death penalty through legislative advocacy and grassroots organizing. To get involved in CMN’s activism, join their Letter to the Editor Campaign or sign up for their Mercy in Action Project, which provide resources to advocate for clemency for people condemned to death.

This World Day Against the Death Penalty, take action with the Jesuit Conference by supporting the repeal of the federal death penalty.