October 5, 2019 — In a ceremony at St. Peter’s Basilica today, Pope Francis created 13 new cardinals, including Canadian Jesuit Michael Czerny, the head of the Vatican’s refugee office. The pope reminded new and old members of the College of Cardinals how much their ministry and service depends on their realizing how much God loves them and has been compassionate with them.

“Unless I feel that I am the object of God’s compassion, I cannot understand his love,” he said Oct. 5 during the consistory, a prayer service during which he personally welcomed 13 churchmen from 13 countries into the College of Cardinals.

A person either feels God’s love or doesn’t, he said, and “If I don’t feel it, how can I share it, bear witness to it, bestow it on others?”

“Am I compassionate toward this or that brother or sister, that bishop, that priest? Or do I constantly tear them down by my attitude of condemnation, of indifference?” he asked, adding that it is a measure of one’s loyalty in ministry.

“So many disloyal actions on the part of ecclesiastics are born of the lack of a sense of having been shown compassion, and by the habit of averting one’s gaze, the habit of indifference.” 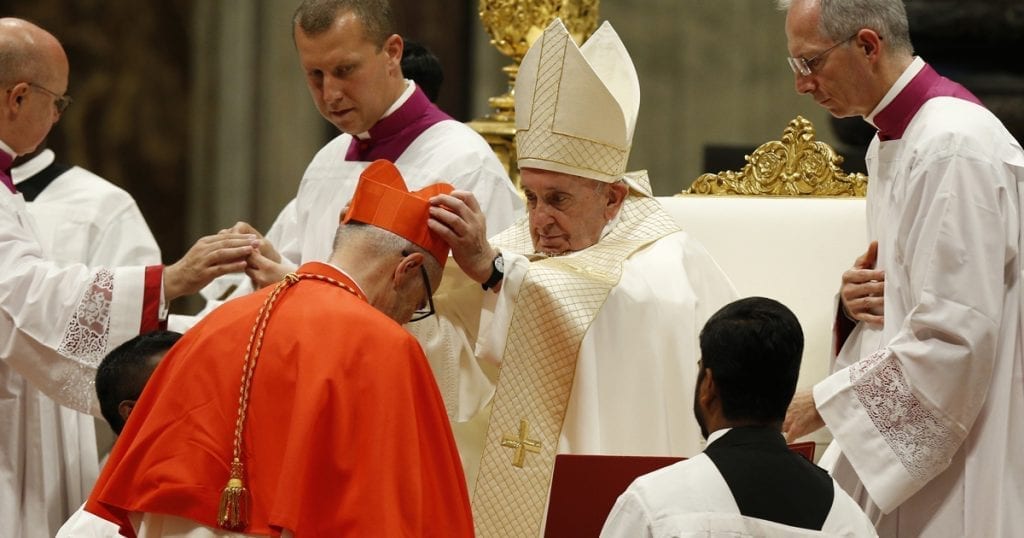 The pope asked the new cardinals to pray that the apostle Peter would intercede on their behalf for the grace “to have a compassionate heart, in order to be witnesses of the one who has looked with favor upon us, who chose us, consecrated us and sent us to bring to everyone his Gospel of salvation.”

Choosing prelates from 13 different nations — eight of whom belong to religious orders — the pope had said he wanted to signal “the missionary vocation of the church that continues to proclaim the merciful love of God to all men and women of the earth.” The Oct. 5 ceremony fell during the extraordinary Missionary Month.

The consistory brought to 225 the total number of cardinals in the world; 128 cardinals are under the age of 80 and eligible to vote in a conclave.

After the new cardinals professed their faith by reciting the Creed and formally swore fidelity and obedience to the pope and his successors, they approached Pope Francis one by one to receive their biretta, their cardinal’s ring and the assignment of a “titular” church in Rome, which makes them part of the Roman clergy.

There were three Jesuits total among the 13 new cardinals. In addition to Cardinal Czerny, the two other new Jesuit cardinals are Jean-Claude Höllerich, archbishop of Luxembourg, and Sigitas Tamkevicius, retired archbishop of Kaunas, Lithuania.

Co-founder and longtime director of the Jesuit Centre for Social Faith and Justice in Toronto, Cardinal Czerny was one of several Jesuits who volunteered to replace the Jesuits murdered at the José Simeon Cañas Central American University in San Salvador, El Salvador, in 1989. He was director of the human rights institute there, along with teaching philosophy and sharing in parish ministry.

In 1992, he was named by the superior general of the Jesuits to be head of the Secretariat for Social Justice of the Jesuit Curia in Rome. In 2002 he was missioned to serve as the founding director of the African Jesuit AIDS Network established by the provincials of Africa and Madagascar. In 2010, he was asked by Cardinal Peter Turkson of the Pontifical Council for Justice and Peace to serve as his “socius” or personal assistant or consultant.

In 2016 Pope Francis appointed him Under-Secretary of the Migrants and Refugees Section of the new Dicastery for the Promotion of Integral Human Development.

Cardinal Tamkevicius was part of the Lithuanian resistance to Soviet occupation and was imprisoned from 1983 to 1988 for “anti-Soviet propaganda.” As a Jesuit priest, in 1972 he began publishing the Chronicle of the Catholic Church in Lithuania, an underground newsletter documenting communist repression of the church. Despite repeated questioning by the KGB, he managed to publish and distribute the chronicle for more than 10 years and, once he was arrested, others continued his work.

Cardinal Höllerich taught and held other positions for 17 years at Sophia University in Tokyo before being appointed by Benedict XVI as archbishop of Luxembourg in 2011. [Source: CNS]