October 30, 2019 — Jesuit Fill in the Blank is an ongoing series where Jesuits from across the U.S. and Canada fill in the blanks — and fill us with deeper insight and understanding into their lives and vocations.

Fr. Joe Laramie, SJ, currently serves as a campus minister at his alma mater, Saint Louis University, where he works on service projects, with students on retreats and in a residence hall. He recently published his first book, Abide in the Heart of Christ: a 10-Day Personal Retreat with St Ignatius Loyola” — and is excited to offer us a glimpse behind-the-scenes into what inspired him to write. 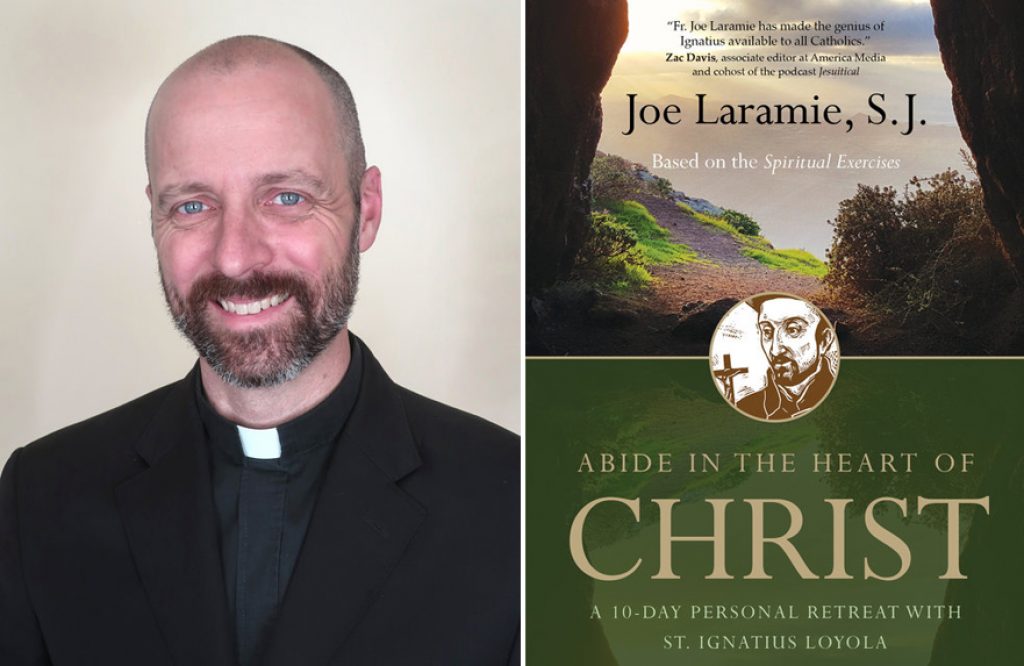 Fr. Laramie: …the most disappointing book you’ll ever read — and that’s why they are so amazing! [Wait, what?!]

If you try to read the Exercises (as I did in college), you’ll find them full of technical language and theological jargon. For example, “After the preparatory prayer and two preludes, this exercise will be a repetition of the first and second exercises” [#62]. Huh?

The genius of St Ignatius is that he didn’t just give us his own reflections on the Gospels and Christian life. Rather, he gives us a method to contemplate these mysteries on our own, with the guidance of the Holy Spirit.

Imagine watching a professional baseball game for the first time and saying to yourself, “I’d like to try that!” Then you go to the library and get the rule book for baseball. It would be a boring and confusing read, with explanations on the “infield fly rule” and what happens when the pitcher commits a balk. You don’t need a rule book, but a coach — preferably one who also loves to play the game! A coach can help you to throw, catch, hit and enjoy playing baseball.

In the Exercises, Ignatius is speaking primarily to “coaches,” known as “spiritual directors.” These are Jesuits and other trained directors who have already made the Exercises (guided by their own spiritual coaches) and had a deep encounter with Christ. They are now helping others to have a similar experience. That’s what I’m hoping to do with my book, “Abide in the Heart of Christ.”

Fr. Laramie: …in a jungle in Belize.

I was working there for a few months after my ordination. Mainly I was driving out to say Mass in Mayan villages — sometimes 2-3 hours away, on dirt roads. I was in a beat up pickup truck, driving with a young Jesuit novice. Anyway, we hit a huge bump in the road and the battery fell out. I am not making this up. There were sparks flying out from under the hood and then “thump.” So we got out and walked.

The sun was going down. Stars came out. We could hear howler monkeys calling from the trees. Then I hear a human voice and see the flash of a machete in the starlight. “Padre? Father, is that you?” The village had sent a young man to find us, since we were several hours late. The machete is just a standard farm tool in Belize — to cut brush or fight off stray dogs or jaguars.

He walked us to the village. The chapel was lit with candles; they had all been in there praying for several hours, hoping and waiting for us. I was sweaty, muddy and exhausted, but it was so beautiful. That’s Jesus. He is the star that lights our way, and the guide who walks with us, and the candle that welcomes us, and the faithful song to the Father. I celebrated Mass that night — giving the Eucharist to the Body of Christ.

I have many fond memories of him from my youth. My grandparents used to have a farmhouse in Warrenton, Missouri, about an hour west of St Louis. My sister and I would go out there for the weekend sometimes. He’d show me around the farm. He was tall and lanky, as I am now; back then I was a pudgy kid with a mess of brown hair. He could have walked faster, but he went slowly so that I could keep up, taking three steps for every one of his. As we walked, he’d stop to point out little details in nature.

As we crossed the creek, he said, “See here, JW.” This was his nickname for me, the initials of my first and middle name, Joseph William. “Right here, these little fish. Those aren’t really fish. They’re tadpoles. They’ll get bigger and turn into frogs.” I had heard this from my science teacher in school, but seeing them with Granddad, made it alive and real.

After poking around in the stream with a stick for a minute, he continued. “And here, see this pink flower? Well, that flower will turn into an apple. And then we can pick them, and your grandma can make them into a nice apple pie.” He’d also ask me about my classes at school, about my baseball team, and about my parents. We’d continue our journey together to the barn, and then head to the fishpond.

As I look back on it, these weekends with my grandparents were a kind of rural Eden. I was like a little eight-year-old Adam, with my grandpa as a loping God the Father. He took time with me. He literally bent down to speak at my level. He did not create apple trees; but he did cultivate and care for them. I am literally made in my grandfather’s likeness, as I resemble him in my appearance and temperament. In the same way, God has made all of us in his very image and likeness, giving us qualities that he himself possesses. One of my book chapters begins with a description of him and the farm and leads into a reflection on Genesis and God creating each of us.

Fr. Laramie: …I gave a talk on a Kairos retreat.

I was a senior at St. Louis University High, a Jesuit all-boys school. My talk was about Christian leadership and how we are all called to be leaders in faith in our own unique ways. I enjoyed giving it and it went pretty well. I talked about my Granddad, of course.

I did theater and wrote for the school newspaper in high school and in college at Saint Louis University. I wrote about sports and concerts. I was Linus in “You’re a Good Man, Charlie Brown.” It was a lot of fun and I became friends with a lot of talented students.

It did occur to me that talking and writing about faith was more powerful, more important and of more lasting value than theater and sports. A play ends after a weekend. My team might win tonight, or they might lose. These are all cultural goods and have their own worth, of course — but life in Christ is eternal.

I felt like the Spirit was stirring in me. Maybe I could use my gifts and interests AMDG — “ad majorem Dei gloriam,” meaning “for the greater glory of God” — as St. Ignatius often said. And I loved it: talking to my small group, helping my classmates to pray together. I wondered, “Is there a way to turn this into a full-time gig?” Maybe working at a retreat house? Then I looked around and saw two Jesuits: our school president and our campus minister. This was their “full-time gig.” They were joyful, talented guys. I’d say the seeds of my vocation took root at that retreat.

Fr. Laramie: …that God is alive.

Jesus is Risen, not “Jesus was raised” from the dead. He IS! He lives and has a Risen Body and a beating heart right now. If you take prayer seriously, your life changes. God does stuff: to us, for us, in us, in the world — if we say “Yes,” if we allow him, if we ask. My Jesuit vocation is an obvious example for me. I’ve worked in Mayan villages in Belize, Central America. I’ve taught high school. I’m now working on a college campus. I could not have orchestrated a single one of these assignments on my own. A few of these I actively avoided, but finally agreed when my superior (and the Holy Spirit) asked me to do it.

This is true for many people for discernment. If you are really asking God for guidance in making a big decision — then you become spiritually aware of these small graces and movements in your daily life. Maybe you’re asking God to lead you to a potential spouse for marriage. Or you are considering a career change. And you’re not just doing that on your own, but really trying to place yourself, your will, your heart in the Lord’s hands. It’s invigorating, rejuvenating and sometimes exhausting! And, you really get a sense that the Lord is at work here; I’m not pulling the strings, but I’m letting the Creator create something beautiful in me for the world around me.