Highlights of Jesuit Formation:
1. Worked with the African Jesuit AIDS Network in Nairobi, Kenya, including helping to develop HIV awareness programs for local parishes and schools and supporting women living with HIV in starting their own businesses.
2. Worked at the Jesuit Forum for Social Faith and Justice in Toronto, leading discussions on social justice issues.
3. Helped launch the Ignatian Spirituality Project in Toronto, a retreat program that supports those in recovery from drug and alcohol addiction and who have experienced homelessness.

Post-Ordination: Will serve as director of Villa Saint-Martin, the Jesuit retreat center in Montreal.

Biography:
While Kevin Kelly, S.J., was born in Ottawa, Ontario, he spent much of his childhood and adolescence with his two brothers and parents at their cottage in Perth, a small town located an hour from his home. Kevin was an altar server for many years at the parish there. After high school and two years of acting in local amateur and professional theatre productions, Kevin attended the Herbert Berghof Studio, a theatre school in New York City. While this was a very formative experience, Kevin decided to leave New York and begin studies in physiology and virology at the University of Toronto. After graduating, he was hired by Merck & Co., an international pharmaceutical company. Kevin held several different leadership positions during his 12-year tenure at Merck in the areas of vaccine research, sales and marketing and medication approval and access. He was also afforded the opportunity to live in many cities in Canada, the United States and Europe. Kevin met the Jesuits in Zurich, Switzerland, and entered the Canadian Province’s novitiate in Montreal in 2011. As a Jesuit, Kevin has had a number of different formation experiences. Working with AJAN, the African Jesuit AIDS Network in Nairobi, Kenya, he helped develop HIV awareness programs for local parishes and schools, assisted medical clinics in gaining access to HIV medications and supported women living with HIV in starting their own businesses. He worked at the Jesuit Forum for Social Faith and Justice in Toronto, leading small discussion groups in a spiritual conversation process on a variety of social justice issues. He also helped launch the Ignatian Spirituality Project in Toronto, a retreat program that supports those in recovery from drug and alcohol addiction and who have experienced homelessness. He attended Regis College at the University of Toronto and completed his Master of Theological Studies in 2015 and his Master of Divinity in May 2020. Kevin was ordained a transitional deacon in October 2019, and his apostolic interests include spiritual and retreat direction, integrating Ignatian spirituality into the business context and working with those in recovery from addiction. Kevin will start his new role as the director of the Jesuit Retreat Centre in Montreal, Villa St. Martin, in July 2020. 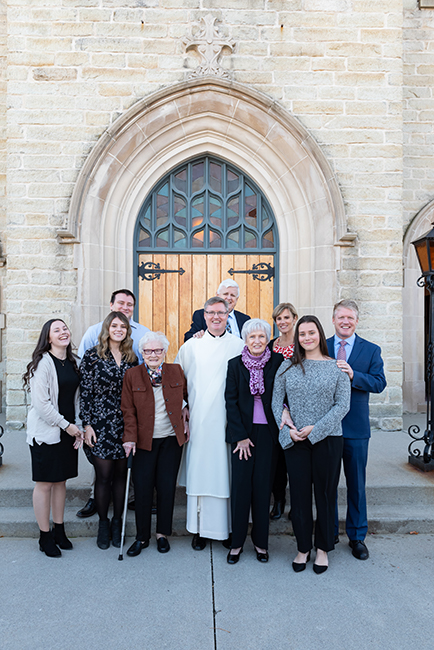 Kevin with his family at his diaconate ordination at St. John the Baptist Church in Perth, Ontario.

Who’s your favorite saint, and why?
St. Claude de la Colombière was a Jesuit priest born in 1641 in southeastern France. He was a teacher, a preacher, spiritual writer, the rector of a large Jesuit community and most notably a spiritual guide. It was in this role of confessor and spiritual director for the nuns of the Monastery of the Visitation Sisters in Paray-le-Monial for which he is best known. There, he met St. Margaret Mary Alacoque, who received private revelations from Christ calling her to promote devotion to his Sacred Heart. Much of St. Margaret’s community spurned and ridiculed her, not believing her mystical visions to be real. St. Margaret was told by Jesus that he would send her a “faithful servant and perfect friend,” one who would guide and care of her. He sent her St. Claude who not only believed in St. Margaret and her visions, but became her ardent supporter and zealous apostle of the Sacred Heart devotion. We are all called to be faithful servants and perfect friends, caring for those who may be excluded and misunderstood, supporting them when the world seems to push them aside. St. Claude models servant leadership beautifully: not needing to be the centre of attention, but the one who cares for and guides others in realizing God’s plan and call for them.

What’s one interesting fact about yourself not everyone would know?
I was the class clown throughout all of high school. This led to desiring a bigger stage and being in several school and local amateur theatre productions. After high school, I worked full time in professional theatre in Ottawa and other parts of Canada. I then auditioned for theatre schools and was accepted into a two-year program at the Herbert Berghof Studio in New York City. I loved this time in my life: I met many interesting people, some of whom went on to be successful in theatre, TV and movies, as well as many others who struggled to find themselves and a working life in the arts. I was lucky to learn early on that I had been a medium-sized fish in a very small pond back in Canada. It helped to make the decision to return home and go to university when my theatre program ended. I am so grateful for the skills that I learned throughout this process, many of which I used in my career before the Jesuits, as well as now in leading retreats and preaching at Mass. It was during this time that I also began to realize that I had a vocation to the priesthood and first became aware of discernment and movements of the Spirit in our lives. 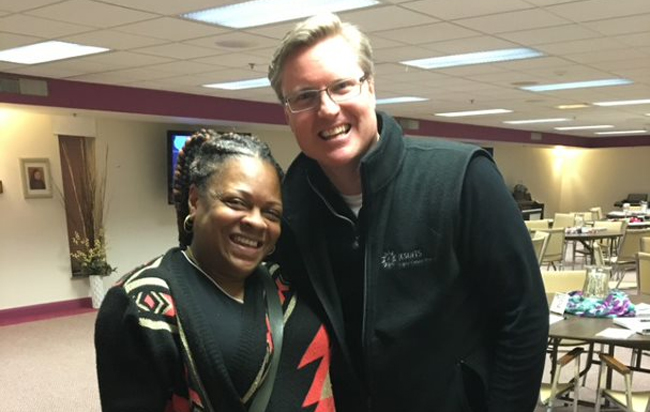 What was one particularly meaningful experience you had during your formation, and why was it meaningful to you?
The Ignatian Spirituality Project (ISP) provides spiritual support for men and women who have experienced homelessness and who are currently in sober living houses in recovery from addictions and trying to refocus and redirect their lives. Like all of us, these individuals need spiritual support but often lack the resources to access it. I helped to launch ISP in Toronto almost five years ago. Our retreat team facilitates weekend retreats, follow-up days of reflection and ongoing spiritual companionship to help these individuals find this support. Through a blend of Ignatian and 12-Step spiritualities, ISP attempts to lay a foundation of hope and healing for those living on the margins. This retreat team is wonderfully diverse. Its 18 members (nine women and nine men) are of different faith traditions, span almost five decades in age, are comprised of religious and lay people, and, while most are in some type of study program (e.g., spiritual direction, theology or pastoral counseling), everyone has unique education and employment experiences. Some members of the team are in recovery themselves or are alumni of ISP retreats. This diversity allows the group to capitalize on its many strengths and meet each ISP retreatant where they are in their recovery journey. Each facilitator also tries to embrace their own brokenness, never seeing themselves as advising or teaching others, but rather offering their own strengths and vulnerabilities in the hope of modeling healthy choices based on their own life experience.

Who is one important mentor who has accompanied you on your journey? What made them a good mentor?
My brother Paul was born with Down Syndrome. He was a very important part of my life, influencing not only my experiences of family, God and faith, but how I see, care for and work with others. Paul passed away in October 2019 after living with dementia for almost three years. Paul naturally assumed the best in people. He was able to see people’s struggles and brokenness even when they were not open to seeing them or sharing them with others. His strength was his ability to bring people together and make anyone feel as though they were the most important person in his life; and there were. Paul modelled many gifts that I seek and try to cultivate as a Jesuit (though, not always successfully): He was gentle, focused on the other and relied on others’ support for him as much as he supported others with their own needs. Paul also loved a party, a good laugh and other simple joys … things that many of us lose sight of when life gets too busy.