Dr. Anthony Fauci on the AMDG Jesuit Podcast: How his Jesuit education helped prepare him for the pandemic

June 24, 2020 — Dr. Anthony Fauci said the way his Jesuit education stressed intellectual rigor and the importance of service to others helped prepare him for his work in public health during an interview on the AMDG Podcast.

“When I went into medical school, I was as much a humanitarian as I was a scientist,” Dr. Fauci told AMDG host Mike Jordan Laskey, reflecting on his time as a student at the Jesuit institutions Regis High School in New York City and the College of the Holy Cross in Worcester, Massachusetts. “And that has had a major impact on the direction of my career in medicine, science and public health.”

Helping to lead the United States’ response to the COVID-19 pandemic as the director of the National Institute of Allergy and Infectious Diseases (NIAID) at the National Institutes of Health, a position he has held since 1984, Dr. Fauci has become a household name thanks to his expertise and calm and clear communication style. Advising the White House and running labs at the NIAID, plus conducting near-constant interviews, the 79-year-old is working 18-hour days, seven days a week. “As I joke around, there’s never ‘Miller Time,’ as they say,” he remarked. 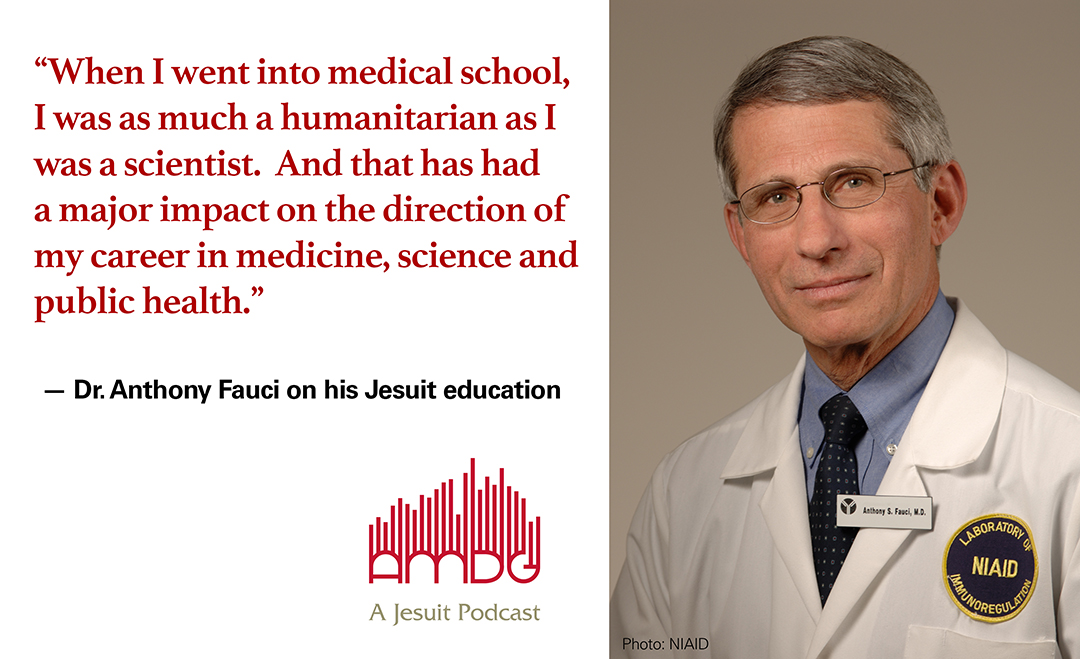 While Dr. Fauci values the science and pre-med education he received and Regis and Holy Cross before attending Cornell Medical School, he was a classics major in college with a strong background in the humanities. “The liberal arts and the humanities develop you as a person,” Dr. Fauci said. “I mean, I am a scientist, so I don’t want the scientists of the world to think I’m bad-mouthing them. But if you just strictly do science, it develops your intellect and your ability to analyze. It doesn’t necessarily make you much better as a person.”

Dr. Fauci also took time during his AMDG appearance to provide an update on the current state of the fight against COVID-19 and urged listeners to keep heart. “This is going to end. It will end. It will end both from a public health standpoint, and science will come in with diagnostics, with therapeutics and with vaccines. So the combination of public health together with scientific discoveries will get us out of that. We can’t get discouraged,” he said. “As difficult as it seems, we just need to be in there together and push together to end it.”

AMDG is a weekly podcast from the Jesuits of Canada and the United States. Subscribe to the show wherever you find podcasts.