Everyday Ignatian is a series written by guest contributors, chronicling their daily lives and experiences through the lens of Ignatian spirituality.

October 4, 2022 — I sat at my desk, eyes glued to Zoom. My hand shook as it hovered the cursor over the microphone button. I took a deep breath, straightened my posture and unmuted. Although my hands still shook, my voice was steady. I spoke to Pope Francis — or his little Zoom square, at least.

I told Pope Francis that climate change inaction, even within the Catholic Church, is perpetuating violence on our common home. I told him that young Catholics are anxious and afraid of our futures, as there is a rapidly closing window to avoid climate catastrophe. I didn’t say these things because I thought the Holy Father needed a lesson in climate change; in fact, I’m positive that he understands our ecological reality. I said these things because this was a synodal event, and the pope wanted to hear from students. Tasked with sharing the hopes, dreams and anxieties of young Catholics today, I shared what was on my heart and the hearts of the other young Catholics I represented: Creation is crying out, and we’re not listening.

In the months since this unconventional Zoom meeting, I’ve reflected a lot on what it means to unmute. On a personal level, when life gets busy it becomes all too easy to stay muted, to mind my own business and tune out the problems around me. When speaking up is uncomfortable or inconvenient, I can mute myself and ignore the problem. On a global level, we ignore the signs of environmental degradation, effectively putting creation on mute while we continue our patterns of consumption. Pope Francis calls us to transformation, he calls us to “listen to the voice of creation.” If we invite creation to unmute, what does it say? And better yet, if we listen to the voice of creation, how are we called to respond?

For the bulk of my time as an undergraduate at Creighton University, I was involved in a student-led fossil fuel divestment movement grounded in Catholic, Jesuit values. Even though I am generally a shy person, I found myself at the helm of this movement, leading protests, marches and meetings with university administration. As a student, I felt that it was worth speaking up — worth unmuting — when I learned that the very university that taught me everything I know about climate change actively invested money in the fossil fuel industry. Other students agreed, and after two years of organizing and advocating, Creighton University announced their commitment to a full divestment plan in December 2020.

I often think about what would have happened at Creighton if students chose comfort and convenience over what we knew to be right and just. Admittedly, it would have been much easier to have spent our time in college muted, unconcerned with climate change or Creighton’s role in it. But instead of staying muted, we demonstrated. We did research. We wrote student legislation — an 11-page referendum with over 70 citations, to be exact. We educated other students. We had uncomfortable conversations with those who either didn’t understand or didn’t agree that students should be meddling in the financial dealings of the university.

It was our formation at Creighton, however, that pushed us to meddle in the first place. Trained as contemplatives in action, we learned that climate change affects the most vulnerable and that being women and men for and with others means acting from our positions of privilege to intervene. As Creighton students, we wanted our university to be an active agent in addressing climate change. We saw the first step as divesting from fossil fuels.

Being a contemplative in action is different than being a contemplative. It requires response, it requires speaking up, and of course, it requires action. Faced with global climate catastrophe, it’s easy to feel paralyzed by despair, to stay muted in the background. But I’ve felt closest to God when I’m unmuted, when I speak up, and when I surround myself with others who are willing to do the same. I am most energized when I stop, reflect, pray and then do something about it.

It was on a cold February evening in Nebraska that I first understood what true contemplation in action feels like. I walked alongside 250 other Creighton students, praying for creation and for Creighton’s board of trustees. We asked that the trustees use their positions of power to ensure a better future for our generation and for all people by divesting from fossil fuels. Marching from St. John’s Parish, a symbol of our Catholic mission, to the boardroom where the trustees meet, we prayed for each trustee, as stewards of the university’s mission.

In unison, we recited together, “Enlighten those who possess power and money that they may avoid the sin of indifference, that they may love the common good, advance the weak, and care for this world in which we live” (Laudato Si’ 246). This was more than a walk across Creighton’s campus, and this was more than just a prayer. This was our way of doing something, and in the energy of the crowd, I felt God’s presence.

For each of us, the doing will look different, but our journeys start the same — with unmuting. Unmute creation and listen to the voices of the Earth, of vulnerable communities and of young people. I promise we have a lot to say.

If you want to learn more about fossil fuel divestment and Emily’s leadership in the movement at Creighton, listen to our interview with her on the AMDG podcast. 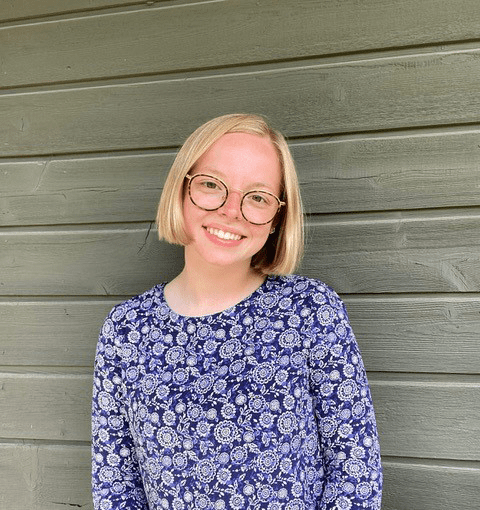 Emily Burke earned her B.S. from Creighton University in 2021. Now a Ph.D. student at the University of Wisconsin-Madison in the joint Sociology and Community and Environmental Sociology program, she researches climate change communications and climate change denial. Emily also works as the social media manager at Catholic Climate Covenant.