Exercising Humility in the Wake of the Election

I expected Election Week to be challenging, but I didn’t expect that I’d be reduced to tears.

I’m Canadian but have always loved the United States. My grandfather was American and served in the US Navy during WWII. A great lover of baseball, he lived most of his life in Montreal, very proud that Jackie Robinson began the integration of the sport there. My father taught US history, and as an adolescent I hung a large American flag on the wall of my bedroom. My love for New York City began on a family trip when I was 13. I’d read The Art of the Deal and a highlight for me (though not my father) was a visit to 5th Avenue’s golden Trump Tower. The next year my dad and I took the train to DC, stayed in a youth hostel dormitory, toured the monuments and museums, and paid respects to the founding documents at the National Archives. My most vivid memory from the trip, though, was the shock at learning from a Union Station newspaperman that the Chicago Bears had traded away my favorite player: Jim McMahon.

As an adult I’ve lived for more than twelve years across the US. I fell in love with Nittany Lion football at Penn State, with East Carolina BBQ and country music in Raleigh, with the Red Sox in Boston, with Chicago-style hot dogs in that beautiful city, and with Ben’s Chili Bowl in DC. Not to mention the many tremendous friends I’ve made here! The country, to say the least, has been very good to me.

I’ve always been critical of certain aspects of US policy, domestic and foreign. The country isn’t quite the beacon of light to the world that it sometimes thinks. But it is one of the world’s longest-standing, most stable democracies, where the rule of law has always been paramount, and it has blessed the world in many ways.

Many aspects of Trump’s presidency have frustrated me. But to see an American president publicly call for election officials to stop counting ballots — this took things to another level. That he simultaneously called to continue counting votes in states where he was behind added an element of farce while in no way diminishing the tragedy. I wanted to laugh but found myself crying.

Democracy, as those in many other countries know from sad experience, is fragile. The very fabric of the republic depends on a certain humility among elected officials, a recognition that the interests of the country stand above their own personal interests, that winning graciously is important but losing graciously even more important. Yet here is a President who is trying to tear the whole system down rather than accept that he has lost.

I know I was not the only one caught off-guard. Despite the profound divisions in the country, I hoped and believed that at a deeper level there was still a widely shared commitment to our core values, to our democracy.

As a Catholic I find it difficult to support either of the major parties. How do I support a party whose greatest “achievements” over the past four years are tax cuts for the wealthy, rollbacks of environmental regulations, and the dismantling of our asylum system? On the other hand, how do I back a party which opposes protections for the unborn, offers little support for religious education, and which for decades passed trade deals that led to huge job losses?

Disagreement is important in a democratic system. That there is no party I can fully support does not mean that I should disengage from the process. On the contrary it means that I need to engage more deeply and creatively, to advance a vision which serves the common good and respects the dignity of all. But this week of all weeks, political parties and candidates are not where I am seeing hope — not in President-elect Biden, not in Representative Pelosi, not in Senator McConnell.

In this dark time the primary point of hope I see is that, whoever may be in the White House, whoever may control Congress, whoever may sit on the Supreme Court, Jesus is Lord. Surely what we share as Christians runs deeper than what divides us. As tempting as it is to make idols of political figures, political parties and political movements, they are not the Lord.

Amid such challenges, what are the first steps towards the reconciliation which is so crucial? First, prayer. Very few of us are happy with the election results. Bring that frustration to prayer, lay it before the Lord.

Second, humility. Much of our media has devolved into echo chambers where we only hear voices we agree with, where those who disagree are denigrated. We desperately need to grow in humility, to recognize that none of us holds all the answers, that I have my own blind spots and that even some of my own beliefs may be mistaken.

Third, we need to listen more deeply to one another, especially to those we disagree with. This doesn’t mean subjecting oneself to abuse or name-calling — better simply to walk away from those who can’t engage in charitable dialogue. But it does mean actively seeking out, and trying to understand, perspectives different from my own. I may not ultimately adopt their views, but at least I will have a greater understanding of why others might.

This then, is my prayer for the coming weeks and months: May we all spend more time focusing on our shared, fundamental values, may we grow in humility and may we listen more deeply to one another. 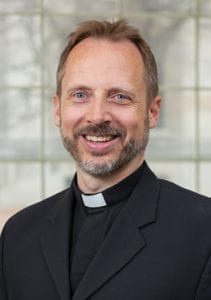 Fr. Ted Penton, S.J., is the Secretary of the Office of Justice and Ecology at the Jesuit Conference of Canada and the United States. A former lawyer in the Human Rights Law Section of the Department of Justice in Ottawa, Fr. Penton recently finished his theology studies (M.Div., S.T.B., S.T.M.) at Regis College in Toronto and was ordained a priest in 2019.