August 6, 2021 — Fr. Pedro Arrupe, SJ, 28th Superior General of the Society of Jesus, was among the Jesuits ministering in Hiroshima, Japan, on August 6, 1945, when the United States detonated an atomic bomb over the city.

In his writings, Fr. Arrupe described his memory of that day:

“I was in my room with another priest at 8:15 when suddenly we saw a blinding light, like a flash of magnesium. Naturally we were surprised and jumped up to see what was happening. As I opened the door which faced the city, we heard a formidable explosion similar to the blast of a hurricane. At the same time doors, windows, and walls fell upon us in smithereens. We … were thrown to the floor.

“I shall never forget my first sight of what was the result of the atomic bomb: a group of young women, eighteen or twenty years old, clinging to one another as they dragged themselves along the road. One had a blister that almost covered her chest; she had burns across half of her face, and a cut in her scalp caused probably by a falling tile, while great quantities of blood coursed freely down her face. On and on they came, a steady procession numbering some 150,000. This gives some idea of the scene of horror that was Hiroshima. … We did the only thing that could be done in the presence of such mass slaughter: we fell on our knees and prayed for guidance, as we were destitute of all human help.” 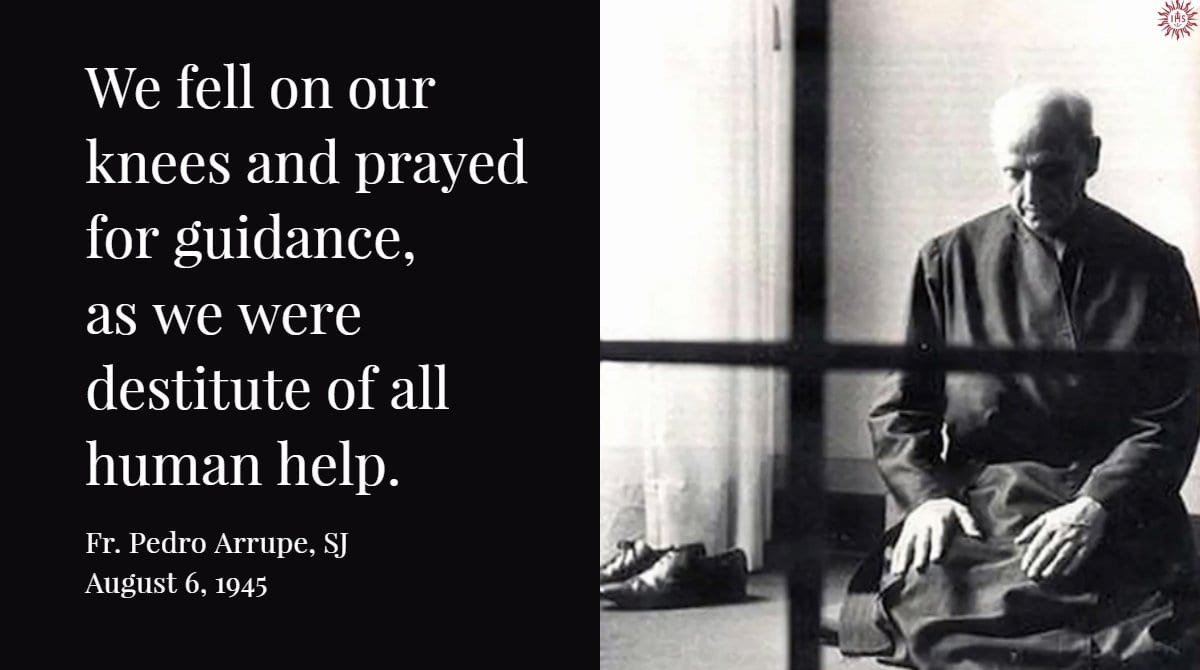 After Fr. Arrupe prayed for the victims, he took action, using the medical training he had completed before entering the Jesuits to help care for the wounded. The Jesuits opened up the novitiate as a makeshift hospital:

“To cleanse the wounds it was necessary to puncture and open the blisters. We had in the house 150 people of whom one-third or one-half had open wounds. The work was painful because when one pierced a small blister, a tiny drop of water spilled out, but when one had to lance a blister that extended over half of a person’s body, the discharged measured 150 cc [over half a cup]. At first we used nickel-plated pails, but after the third patient, seeing all there was ahead of us, we began to use kettles and basins we could find in the house.” 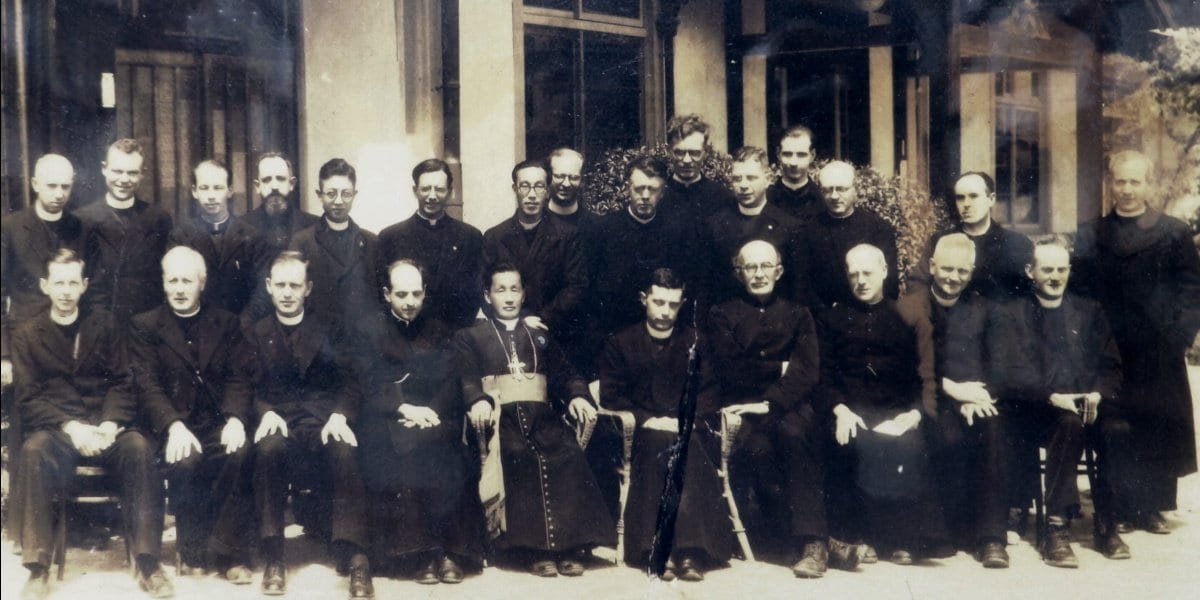 Fr. Pedro Arrupe, SJ, (seated fourth from left) with Jesuits at the Jesuit novitiate in Hiroshima, where he was appointed Master of Novices in 1942.

Fr. Arrupe on being a priest and entering the city at great self-risk:

“It is at such times that one feels most a priest, when one knows that in the city there are 50,000 bodies which, unless they are cremated, will cause a terrible plague. There were besides some 120,000 wounded to care for. In light of these facts, a priest cannot remain outside the city just to preserve his life. Of course, when one is told that in the city there is a gas that kills, one must be very determined to ignore that fact and go in. And we did. And we soon began to raise pyramids of bodies and pour fuel on them to set them afire.”

Today, we pray for all those who are victims of wars, for a world where war is not needed to solve our differences, for a world filled with peace. [Sources: ISN, JCAP]