How do you effectively minister to more than 900 Catholic souls when you’re only permitted 30 one-on-one visits each week? That’s the dilemma Chicago’s Archdiocesan jail ministry, Kolbe House, faced when the Cook County jail system capped its number of visits from religious organizations. Fortunately, the Kolbe House staff included Mike McGillicuddy, an Ignatian Volunteer with a background in both prison administration and social work. McGillicuddy proposed a creative solution: psychosocial group meetings led by Kolbe House volunteers. Now the organization runs a whole array of groups, including substance abuse, positive psychology, anger management and grief; they are even exploring the possibility of group Spiritual Exercises with incarcerated men and women.

Volunteers don’t usually bring that level of sustainable improvement to an organization. On the contrary — though volunteers are the lifeblood of many nonprofits, the constant cycle of recruiting, scheduling and orienting newcomers can be a challenge to forward momentum. Ignatian Volunteers, however, undergird their passion for service with both professional competence and long-term commitment.

Here’s how it works. The Ignatian Volunteer Corps (IVC) matches individuals aged 50 and over with service providers who need their expertise. Corps members volunteer one or two days each week for 10 months a year; partner organizations pay a modest annual stipend, which supports IVC’s local and national operation. In addition to their service, corps members gather regularly for shared spiritual formation and reflection, enabling them to be true contemplatives in action.

It’s no surprise that McGillicuddy joined IVC after retirement. He’s a graduate of Creighton Prep with master’s from Loyola University Chicago; Ignatian spirituality is practically in his DNA. Yet one doesn’t have to be Jesuit-educated to become an Ignatian Volunteer. Christine Tucker first encountered the Jesuits while working for Catholic Relief Services (CRS) in Cairo. Having recently joined the Catholic Church, Tucker was seeking a more serious encounter with God when someone suggested she make the Spiritual Exercises. She’d only thought of Jesuits as academics; what a surprise, she recounted, to discover that Ignatian spirituality was all about love. Tucker was hooked.

When she retired to Baltimore after a 35-year career with CRS, Tucker sought a volunteer opportunity that would combine service with spiritual growth and allow her to let go of her professional identity while continuing to use her considerable skills. She found all that in IVC through a placement at Asylee Women Enterprise (AWE), which journeys with asylum seekers and other forced migrants as they rebuild their lives. During her five-year tenure as an Ignatian Volunteer, Tucker made it her mission to help the organization tell its story. She found myriad ways to bring the plight of asylum seekers to light and encouraged the Baltimore community to experience and support AWE’s work. Knowing that the “story” needed to be quantifiable as well as anecdotal, she spearheaded an effort to track everything trackable — from demographics to donations — enabling AWE to present a more compelling case to potential supporters. And when the pandemic struck, Tucker helped the organization make the shift from in-person classes and meal distribution to Zoom instruction and contactless food delivery.

As illustrated by Tucker’s story, the challenges created by the pandemic also revealed an opportunity: With partner agencies pivoting to virtual programming, IVC no longer needed to be constrained by a geographic footprint. This opened the door to service for Marquette alum Craig Schulte. Following his retirement as a human resources professional, Schulte became an Ignatian Volunteer — even though IVC had no presence in his city. From his living room in Cedar Rapids, Iowa, Schulte works with Jesuit Worldwide Learning, supporting a certified youth sports coordinator program in refugee camps across Rwanda. Right at home, yet far from his comfort zone, Schulte is grateful for the chance to contribute to the enrichment of young people for whom life has been unimaginably difficult. To support this new kind of member, IVC has created a virtual community that meets monthly, participating in the shared reading and reflection process that corps members in the geographic regions enjoy.

The opening of virtual service placements is good news for John W. Green, IVC’s vice president for Partnership Engagement, who was hired in 2019 to spearhead the Currie Alumni Partners in Service (CAPS) initiative. CAPS aims to strengthen Jesuit schools’ relationships with their largest cohort of alumni — those reaching retirement age. Green’s outreach is no longer limited to those living in IVC regions; anyone who has taken to heart their identity as a person for others is welcome to apply. Continuing Ignatian traditions rooted in their early college experiences, alumni over 50 can discover a fresh avenue for generativity later in life, as well as a nourishing spiritual community.

That community component is what leads many Ignatian Volunteers to extend their commitments year after year. Mike McGillicuddy acknowledges that he could have volunteered for Kolbe House independently but says he would not trade the faith community that comes with IVC service. Doubly Jesuit-educated, he is happy to connect with those roots during monthly days of recollection and annual retreats, and he relishes his connection with other men and women on a similar path. Thinking about the challenges of life after retirement, McGillicuddy muses that men, especially, “have often overcommitted to employment as the route to meaning and affiliation in our lives.” Quite simply, the Ignatian Volunteer Corps has opened a new world of both meaning and friendship for him.

Chris Tucker echoes McGillicuddy’s gratitude for the ongoing faith formation she receives through IVC. Though now taking a sabbatical to discern next steps (and training to give the Spiritual Exercises herself), Tucker still chokes up when describing the impact of her service. “It’s like that Corinthians passage about many parts but all one body,” she said. “So often, as we each did our part, I experienced the body of Christ and the presence of God.”

IVC was founded in 1995 by Jesuit priests Jim Conroy and Charlie Costello, who gathered 11 retired men and women to combine service to the poor with a unique process of spiritual reflection. Twenty-six years later, the organization — headquartered in Baltimore — is administered by a national lay leadership team with local directors across 21 regional chapters, deploying over 500 corps members to respond to the needs of our time.

To see all the cities where IVC serves — or to explore the possibility of a virtual placement — visit their website and experience making a difference! 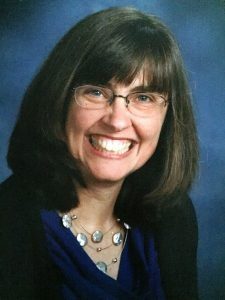 Christine Marie Eberle is on the Ignatian Volunteer Corps Philadelphia / South Jersey Regional Advisory Board. She is the author of the forthcoming book, “Finding God Abiding,” as well as other works. Read more from Christine at www.christine-marie-eberle.com.