During the Pacific Theater of World War II, Edward Flaherty worked as a battlefront Army medic, treating wounded soldiers and evacuating troops. His service earned him seven medals of honor from the U.S. Army, but he never received them. Instead, when the war ended, he retired quietly and pursued his vocation as a Jesuit priest. Last month, over 75 years since he hung up his Army uniform, Fr. Flaherty, SJ, received his medals in a surprise ceremony at Regis University.

At 102-years old, Fr. Flaherty “has been a quiet force in our community for a very long time,” said U.S. Representative Ed Perlmutter, who presented the medals to Fr. Flaherty. Until his retirement at age 99, Fr. Flaherty served as pastor of Shrine of St. Anne Catholic church and taught theology at Regis College and Regis Jesuit High School.

College of the Holy Cross has established the Philip L. Boroughs, SJ, Scholarship, in honor of Fr. Boroughs who recently retired after nine years as the college’s president. With a total endowment of $8.69 million, the fund will provide financial aid to students with significant financial need who graduated from Jesuit and Catholic high schools.

“Fr. Boroughs has been a magnificent leader over the past nine years,” says College of Holy Cross board chair Richard Patterson. “The trustees want to honor his service and his legacy, and the endowed scholarship seemed like the perfect tribute to this humble man, emphasizing Phil’s deep concerns regarding student opportunity and accessibility.”

The town of Florissant, Missouri celebrated a special holiday on June 23: Fr. Louis Hotop, SJ Day. Proclaimed by the major of Florissant, Timothy Lowery, the day celebrated Fr. Hotop who grew up in Florissant and was recently ordained to the priesthood.

After six years as leader of the Jesuits East Province, Fr. John J. Cecero, SJ, will return to Fordham University as the vice president for Mission Integration and Ministry. Previously, Fr. Cecero was a professor of psychology at the university, as well as rector of its Jesuit community. In his new role, he will oversee the Office of Campus Ministry, the Center for Community Engaged Learning and the Center on Religion and Culture.

“In Fr. Cecero we have a leader of intellectual substance, strong faith and deep understanding of the human condition,” wrote university president, Fr. Joseph M. McShane, SJ. “I believe he is exactly the right choice.”

Fr. Tim O’Brien, SJ, has been named director of Mission Initiatives at College of the Holy Cross, where he graduated from in 2006.

“It is like coming home, not just being back at the college but working to advance a mission that I love,” Fr. O’Brien said. “The mission of Holy Cross, as a Catholic, Jesuit, liberal arts college, changed my life — I say that as often as I can to whoever will listen. It really formed me as a person. Not only did it lead me to the Society of Jesus, but Holy Cross has shaped my intellectual and personal pursuits in the 15 years since I graduated.”

This month, Scranton Prep welcomed Fr. Angelo (A.J.) Rizzo, SJ, as its new president. Fr. Rizzo most recently served at Regis High School in New York City as director of Mission and Identity. As a Jesuit in formation, he taught English, theology and Latin at Scranton Prep. 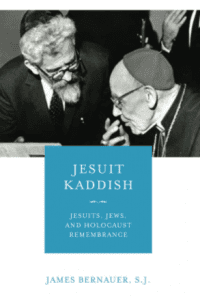 The “fire in lay spirituality has spread remarkably” in the last 50 years, according to Fr. Joseph Tetlow, SJ. But sometimes training in spiritual direction can feel dry and technical rather than deep and formative. With his new book, “Handing on the Fire: Making Spiritual Direction Ignatian”, Fr. Tetlow hopes to provide a framework for “theology in action” that can deepen lay spiritual direction from an Ignatian lens.

Fr. James Bernauer, SJ, has received the Catholic Media Association Book Award for Ecumenism or Interfaith Relations for his book, “Jesuit Kaddish: Jesuits, Jews, and Holocaust Remembrance.” The book is an unflinching reflection on the centuries-long Jesuit hostility toward the Jewish people leading up to World War II. In examining this history, Fr. Bernauer hopes the book will contribute to interreligious reconciliation.