A few months ago, my husband and I got a note from our son’s preschool that he had failed the school’s vision test and needed to be seen by an eye doctor.

My heart sank, tinged with grief at the possibility of a life-altering diagnosis for our son. (I now see my heartache, though a normal, gut reaction for any parent, as overblown. Of all the possible diagnoses for a child, I know that poor vision is relatively minor on the scale.)

Though my initial shock and sadness subsided, I felt suspense for weeks. The soonest appointment I could get with an eye doctor was three weeks away.

During that time, I tried to wait patiently. I wondered: How long has he been unable to see? How bad is his vision? And if glasses were in the cards, how would we handle them? For a three-year-old who is regularly tumbling, running and (play) wrestling, I couldn’t imagine how this new hardware would fit into his life.

Advent was approaching at that time, and I realized that my waiting was not unlike that of Mary, — of all of us, really — as we waited for the birth of Jesus.

In prayer — much as we are instructed to do in the Spiritual Exercises — I tried to imagine what Mary must have felt in the days and weeks leading up to Jesus’ arrival. Though an impending doctor’s appointment pales in comparison to giving birth — and far from the comforts of home at that — Mary must have had her own heavy, unanswerable questions. I imagined her looking to the day of Jesus’ birth with longing; she probably wanted the weight of anticipation lifted from her own shoulders.

The day for my son’s appointment came, and we learned that his eyesight was quite poor. He needed glasses not just to see, but to prevent potentially irreversible damage to his eyes. We ordered bright red glasses in honor of his favorite character, Lightning McQueen from the Pixar film “Cars,” and several days later they were on his tiny, sweet face.

At first, my son appeared shy and confused, a rarity for his boisterous, larger-than-life, unflappable personality. When his initial shock wore off though, he looked at me with quiet, innocent joy. “Mama,” he said. “I can finally see.”

In that moment, my relief brought me to tears. The outcome was no longer a question mark; weeks of anticipation had come to an end.

I imagined my relief as a fraction of what Mary must have felt when she gave birth to Jesus. Her massive task had been completed; the Savior was now among his people.

To my surprise, my relief at my son’s newfound ability to see quickly faded. I had assumed that with the arrival of the bright red glasses, all worry would subside. I was wrong.

The anticipation of knowing my son needed glasses and the subsequent wait for them to arrive only gave way to a new journey of worry and anticipation.

What if the glasses break? What if he feels self-conscious as he gets older? What if he gets made fun of at school? Or worse yet, what if we didn’t catch the problem in time and his eyes are damaged for life? (Anyone with children in their lives knows this spiral of worry well.)

I continued to imagine Mary and what she must have felt throughout Jesus’ life. My guess is that she, too, felt a fleeting sense of relief at Jesus’ birth. Yes, she delivered God’s Son into the world. But she also must have known the road ahead would not be easy. With Jesus’ birth, a new season of anticipation was only just beginning. Would the prophesies about her son turn out to be true? What would be required of him, the Son of God? Would he encounter resistance, or worse yet, suffering?

I suspect we don’t often think of Mary’s ongoing worry because we like neat, tidy endings. These sorts of endings put us at ease. The alternative — ongoing uncertainty, continuous breath-holding — can seem too frightening and uncomfortable to bear.

Had I known when I received that note in my son’s backpack that it would bring years of questions and gentle, nagging reminders — “Where are the glasses?” “Where is your case?” “Why are they bent?” — I would have felt even more fearful and anxious. The waiting for that first appointment, and for the glasses to arrive, would have been a whole other level of difficulty.

I was lucky that I did not think about the ongoing worry that my son’s poor eyesight would require. Perhaps it was parenting naivete, or perhaps I was just hyper-focused on what was immediately in front of me.

There are plenty of situations in which the ability to focus on the present can feel like an unknown luxury. From the start of a journey, we may immediately feel that our path is unending and overwhelming. Perhaps it’s a diagnosis for a terminal illness or a series of starts and stops in a job search or the ongoing grief for a lost loved one.

As we prepare for the Solemnity of Mary on January 1, we celebrate a woman and a mother whose waiting and worry didn’t end. Let her be our solace, our comfort and our guide for navigating the fuzzy and unending journeys of our own lives and for finding God amidst it all.

When we are expecting tidy finishes, when our capacity for uncertainty feels limited, let us look to Mary for how to faithfully live a life of anticipation, not just a season. 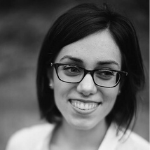 Christina Ferguson is a nonprofit and corporate senior manager, writer, and mother. Currently serving at Graham-Pelton, Christina has worked with Leadership Roundtable, Georgetown University, Catholic Relief Services, and Ashoka: Innovators for the Public. She holds a Master’s Degree in Public Policy from Georgetown University and a Bachelor’s of Science in Finance from Villanova University.