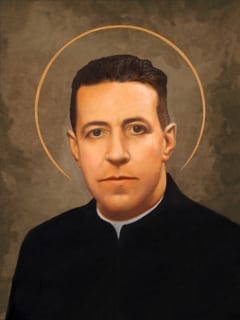 August 18, 2022 — Today is the feast day of Saint Alberto Hurtado, a Chilean Jesuit priest known for his engagement with Chilean culture and his work with young adults and the poor. Canonized on Oct. 23, 2005, he became Chile’s second saint, best known for founding Hogar de Cristo, houses for the poor.

Born in Chile on Jan. 22, 1901, into a once-aristocratic family, Fr. Hurtado lost his father at age four. His family, suddenly impoverished, lived with a succession of relatives. From an early age, he experienced what it meant to be poor, to be without a home and to be at the mercy of others.

He received a scholarship to St. Ignatius Academy, a Jesuit high school in Santiago, Chile, where he became a member of the Sodality of Our Lady and developed a lifelong love for the poor, spending time with them in the slums every Sunday afternoon.

After graduating from St. Ignatius in 1917, Fr. Hurtado wanted to become a Jesuit, but was advised to delay his entrance in order to take care of his mother and his younger brother. He worked in the afternoons and evenings to support them while studying law at the Pontifical Catholic University of Chile. He continued to care for the poor and visited them every Sunday. “He was incapable of seeing pain, nor indeed any need, without seeking a way to solve it,” recalled his spiritual director. After serving a term of obligatory military service, Fr. Hurtado completed his degree in August 1923.

On Aug. 14, 1923, at the age of 22, he entered the Jesuit novitiate in Chillán, Chile. In 1925 he went to Córdoba, Argentina, to study humanities and was next sent to Spain in 1927 to study philosophy and theology. In 1931, he went to Belgium to continue studying theology at the Catholic University of Leuven. He was ordained a priest there on Aug. 24, 1933, and in 1935 obtained a doctorate in pedagogy and psychology. He returned to Chile in January 1936, where he served as professor of religion at St. Ignatius Academy and professor of pedagogy at the Catholic University of Santiago. He frequently directed retreats and offered spiritual direction to many young men, accompanying several of them in their discernment of a priestly vocation and contributing to the formation of many Christian laymen.

In 1941, he became the assistant for the Youth Movement of the Catholic Action, first within the Archdiocese of Santiago and then nationally. Under his guidance, the chaplaincies grew rapidly – from 1,500 students in 50 centers in 1941 to 12,000 students in 500 centers in 1944. This work led him to create an organization for a smaller group of committed young adults, the Service of Christ the King, whose members dedicated one year to living out the ideals of Catholic action.

In 1944, a homeless man approached Fr. Hurtado on the street on a cold night. “A poor man, in shirtsleeves, suffering from tonsillitis, and shivering with cold, approached me saying he had nowhere to find shelter,” Fr. Hurtado wrote of the life-changing experience. A few days later, while directing a women’s retreat, he recounted this experience to his audience and asked them to turn their thoughts to the poor. “Christ is without a home!” he said.  He continued: 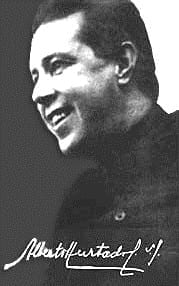 Christ roams through our streets in the person of so many of the suffering poor, sick and dispossessed, and people thrown out of their miserable slums; Christ huddled under bridges, in the person of so many children who lack someone to call father, who have been deprived for many years without a mother’s kiss on their foreheads … Christ is without a home! Shouldn’t we want to give him one, those of us who have the joy of a comfortable home, plenty of good food, the means to educate and assure the future of our children? “What you do to the least of me, you do to me,” Jesus said.

This inspired the women to pool their resources, which allowed Fr. Hurtado to open his Hogar de Cristo, or “Home of Christ,” houses for the poor. The first Hogar house opened in 1945 and quickly attracted volunteers; within a few years, similar houses spread across Chile. The houses offered shelter and taught technical skills and Christian values. Between 1945 and 1951, some 850,000 children were helped by Hogar de Cristo. In addition to his work with Hogar, his retreats and outreach to youth, he wrote several books and founded the journal Mensaje, a Catholic magazine highlighting the social teachings of the church, which is still published by the Chilean Jesuits.

At age 50, Fr. Hurtado was diagnosed with pancreatic cancer. In the midst of his terrible discomfort, he was often heard to say, “I am content, O Lord, I am content.” He died on Aug. 18, 1952, at age 51. His funeral, in the Church of St. Ignatius in Santiago, was filled with so many of the poor who venerated Fr. Hurtado that many of his close friends had to remain outside. He was beatified by Pope John Paul II in 1994 and canonized by Pope Benedict XVI in 2005. All of Chile celebrated the man who the country’s president called one of Chile’s “founding fathers.”

Today, the Jesuit Universidad Alberto Hurtado in Santiago is named in his honor, as well as the Jesuit novitiate in St. Paul, Minnesota, and many other Jesuit buildings and institutions. [Sources: The Vatican, America Magazine]