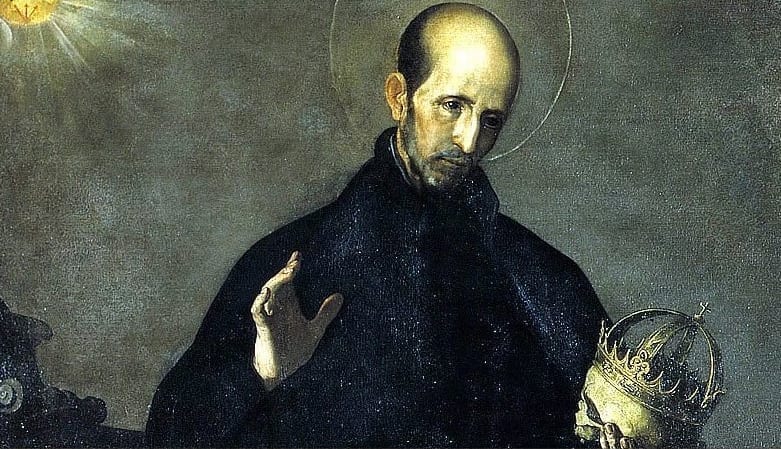 The oldest son of the third duke of Gandia, Borgia was born in Valencia, Spain. His great grandfather on his father’s side was Pope Alexander VI, and his mother’s grandfather was King Ferdinand of Aragon.

Borgia joined Spain’s imperial court at age 18, and the next year he married Eleanor de Castro. Together they had eight children. In 1539, after experiencing a religious conversion, he began to devote himself to prayer and penance. He left the court but continued in public life as viceroy of Catalonia.

In 1543, Borgia succeeded his father as duke of Gandia, but when his wife died three years later, he decided to dedicate the rest of his life to serving God. He was familiar with the Jesuits, being a friend of Father Peter Faber, SJ, and he joined the Society of Jesus in 1550 after making provisions for his children.

He served for a few years as a parish priest until the Jesuits promoted him so that he could use his administrative talents for the church. In 1554, St. Ignatius Loyola, founder of the Society, appointed Borgia commissary general in Spain, overseeing the provincials in Spain and Portugal. In this role, he founded Spain’s first novitiate and set up over 20 schools.

The Jesuits elected Borgia as their third Superior General in 1565, succeeding Diego Laynez, SJ. Borgia served as the Jesuits’ leader for seven years and devoted himself to revising the Society’s rules, expanding its missions in India and the Americas and shepherding the growth of the young Society.

In 1571, the pope sent Borgia to Spain and Portugal to help build an alliance against the Turks. He grew ill on the trip and died after returning to Rome on September 30, 1572, at age 61. He was canonized in 1670 by Pope Clement X. [Sources: Jesuit Curia, IgnatianSpirituality.com]