Treasure Hunting at the Jesuit Archives: Five Fun Finds from the American West

October 3, 2019 — Since its founding in 1540, the Society of Jesus has emphasized record creation and keeping among its members. It was important to St. Ignatius that fellow members of the Society keep him up to date on their activities with regular letters, which eventually evolved into a more formal record keeping process. In the past, each province (the Jesuit word for regional administrative units) maintained their own records. Beginning in the mid-1990s, though, what was once just the Missouri Province Archives started working with other provinces to keep their records, too.

The Jesuit Archives & Research Center (JARC) in St. Louis, which opened in 2018, is now the central repository for the records of U.S. Jesuits, plus the Jesuit Conference of Canada and the United States. In a nutshell, it’s home to all the day-to-day stuff — treasurers’ records, insurance papers, newsletters, provincials’ papers, personnel files, etcetera — as well as the personal papers of individual Jesuits.

We’ve also got some interesting special collections, like tens of thousands of postcards of religious sites and holy relics we give to Jesuit works. Here are five interesting items from the former California Province Archives and Oregon Province Archives, our two most recent acquisitions.

Although some men enter the Jesuits directly after high school, many more discern their calling a few (or many) years later. This can lead to some interesting “previous careers,” and that’s certainly the case with Fr. Raymond Kelley, SJ, from the former California Province. After attending Regis High School in New York City, he became a cartoonist for several different film studios in New York and California, ending up at Disney in the last few years before he entered the Society. 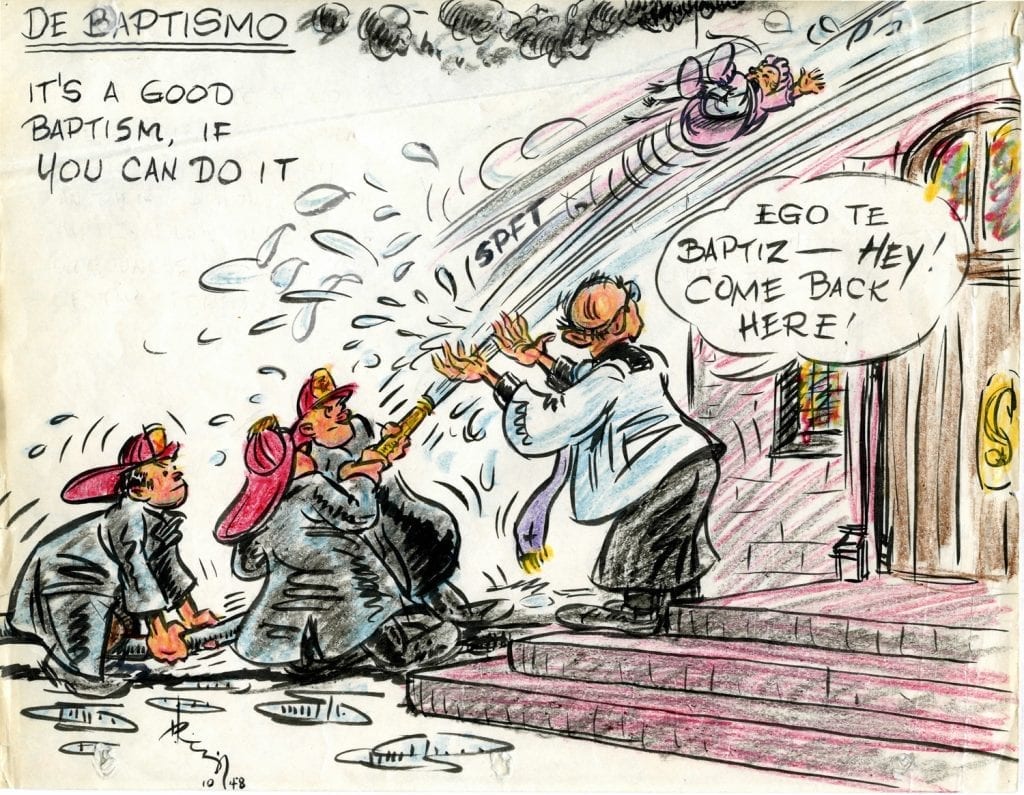 Fr. Kelley drew this cartoon as a Jesuit novice.
Fr. Kelley worked on a few movies, most notably “Fantasia” in the late 1930s. He didn’t stop doodling after he entered the Society, either — his personal papers here at JARC include class notes from his time in the novitiate with sketches of his classmates and teachers, as well as full page cartoons he drew to entertain his fellow students. 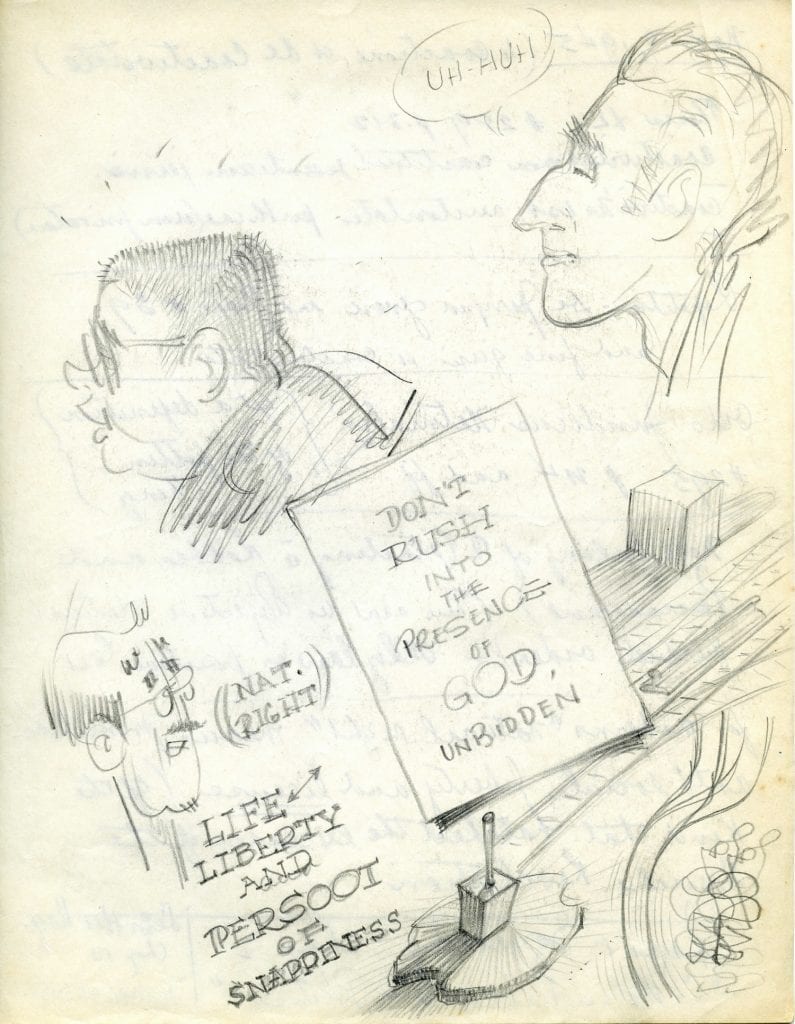 A page of Fr. Kelley’s class notes from his time as a novice.

2. The Holiest Deck of Cards You’ll Ever See

Jesuits can get pretty creative with the way that they talk to people about the Catholic Church, and Fr. William Armstrong, SJ, is a great example. His personal papers include a variety of interesting catechetical tools, including this deck of playing cards. Each card features a different element of the faith, including prayers, the Ten Commandments and the Beatitudes. While we don’t know exactly how he used them, they’d likely have been an excellent tool for people converting to Catholicism and a fun way for those who were already Catholic to brush up on their faith.

There’s not just notable Jesuits in our records here at JARC. We’ve found documents signed by Abraham Lincoln, Franklin D. Roosevelt, John F. Kennedy, Bing Crosby, Conrad Hilton, Cecil B. DeMille and more! But one of our coolest signatures may be a name that’s not immediately familiar: Jorge Mario Bergoglio. He’s better known as Pope Francis. Back when he was Fr. Bergoglio, the pope was the provincial (regional head) for the Jesuits in Argentina. This letter signed by him was in the file of an Argentinian Jesuit who had spent some time in California.

The Jesuit Archives aren’t just a place for paper documents. We have a lot of physical objects that come to us as well. Some of these objects aren’t surprising, like chalices and artwork. But since we keep items related to Jesuits’ personal lives too, we get things that are related to their hobbies. This camera made photographs on one of the earliest types of film — glass plates. 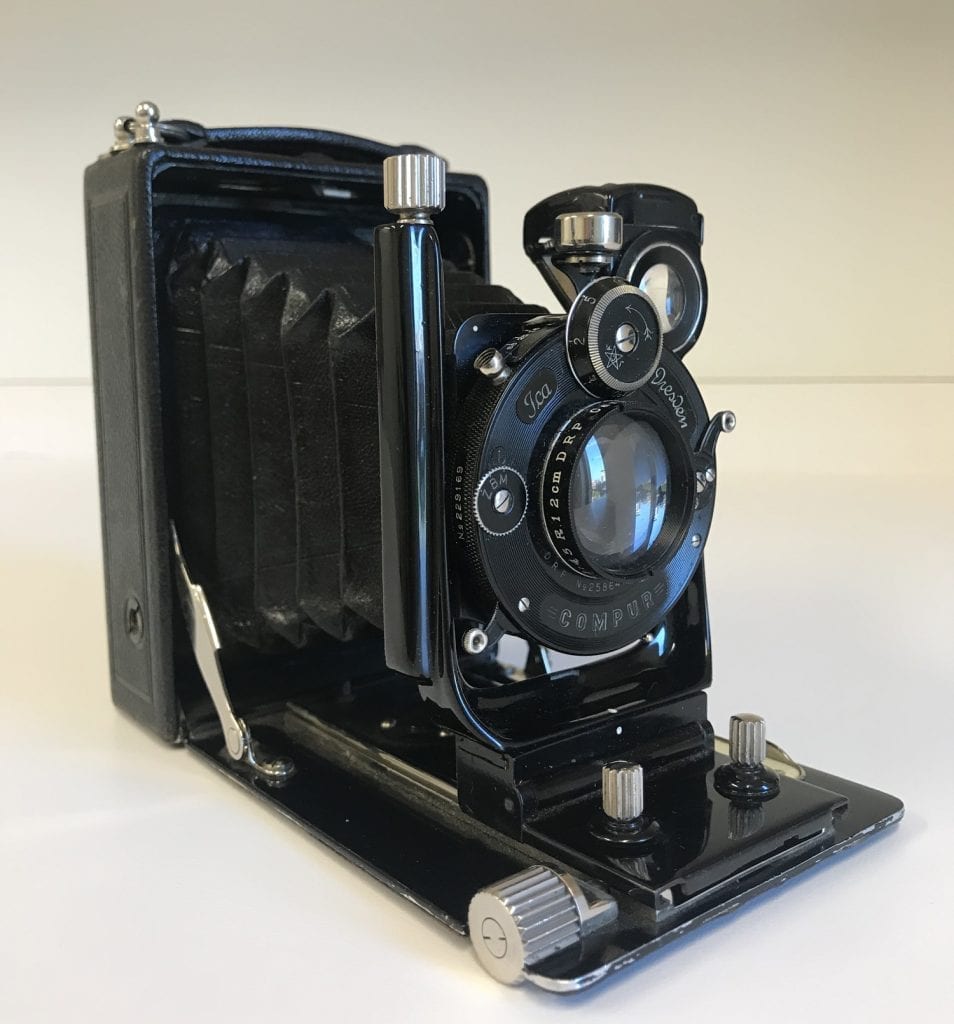 Pieces of glass were painted with an emulsion and slipped into the back of the camera. Each plate made one photograph. This particular camera is an ICA Niklas, manufactured sometime between 1912 and 1926. It was Fr. Julius Jette, SJ’s, a member of the former Oregon Province who spent much of his career as a missionary in Alaska.

5. Signs of the Times: Souvenir and Campaign Pins

We do our best to keep track of how material makes its way to us, but sometimes we’re no longer sure exactly how a collection ended up at JARC (or in a province archive that then was transferred to JARC). That’s the case with this little collection of pinback buttons in the California Province Archives. These three pins date from the 1930s and 1940s.

The Empire State Building pin may have been a fond memento of an enjoyable trip. Both political buttons are related to Franklin D. Roosevelt’s presidential campaigns. The bronze lapel pin is from his first presidential term, with both his profile and that of his vice president, John Nance Garner. Around the edge of the pin is the phrase “A New Deal, A New Day.” The red, white and blue pin is from his final election in 1944, when Harry S. Truman was his running mate.

There are thousands of feet of records and material at JARC, dating as far back as the 1800s and representing Jesuit activities in the United States and the works of American Jesuit missionaries around the world. Our collections are as diverse as the Jesuits themselves — from seismology to spirituality, optometry to ordinations, ventriloquy dummies to vestments, we’ve got the material to support all sorts of research interests. 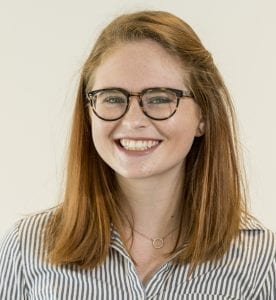 Maddie McDermott, MA, MLIS, is the Associate Archivist for Collection Management at the Jesuit Archives & Research Center in St. Louis. As the collections management archivist, Maddie makes sure that everything that comes into JARC is organized and ready to go for researchers. It also means that she’s the first JARC staff member to run across archival treasures as they come into the building. Among her weirder finds are a finger bone, hair, dental crowns, a sword, WWII ammunition and a scrapbook bound in sealskin.