Jesuit Father Mallick J. Fitzpatrick was born in Brooklyn, New York, on Aug. 16, 1929, and grew up in Queens. His parents were Mallick and Elizabeth “Beth” Flynn Fitzpatrick. He attended Saints Joachim and Anne’s Grammar School in Queens and then Regis High School in Manhattan. Upon graduation he entered the Society of Jesus at St. Andrew-on-Hudson on Sept. 7, 1947. Completing his novitiate and juniorate in 1951, Fr. Fitzpatrick went to Woodstock College in Maryland to study philosophy. In 1952, he moved to Bellarmine College in Plattsburgh, New York, to complete his philosophical studies.

In 1954, Fr. Fitzpatrick began a 57-year career at Fordham Preparatory School in the Bronx. His three years of regency involved teaching Latin, English and Greek, and coaching freshman basketball. During this time, he also began his long involvement with the prep track team. Fr. Fitzpatrick returned to Woodstock College in 1957 to study theology. He was ordained to the priesthood on June 18, 1960, in Fordham University Church, Francis Cardinal Spellman being the ordaining prelate.

After completing his theological studies in 1961, Fr. Fitzpatrick made his Tertianship in St. Bueno’s College in Wales. While there he spent three months serving as a United States Army chaplain in Heidelberg, Germany.

When he returned to the United States in 1962, he resumed his career at Fordham Prep, where he became head of the Counselling Department. With Fr. John Replogle, SJ, Fr. Fitzpatrick instituted the Group Guidance Program, and, in a precedent-breaking move, he opened the college selection process to include non-Catholic colleges. He also continued coaching and mentoring the track team, and in 2002 began teaching art history.

One of his former basketball players had the following to say about Fr. Fitzpatrick: “Great coaches, like great teachers, instill something of themselves into the athletes — something that lasts a long time but is never easy to define or put into words. Fitz was that kind of coach. We didn’t know it then, but he was teaching us discipline and how to play the game — lessons that sink in and last a lifetime, usually without our even being aware of them,”

Because of declining health, Fr. Fitzpatrick moved to Murray-Weigel Hall in June 2012 but still continued counselling and teaching at Fordham Prep until 2016.

Fr. Fitzpatrick brought his knowledge of art to Murray-Weigel. The walls of the health facility are filled with artwork that he selected, making the house a museum of classical paintings. Though it was difficult for him to get around, he was always an active and pleasant member of the Jesuit community. 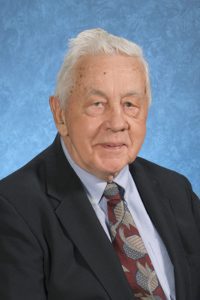