Jesuit Brother Rosaire Grondin died in the infirmary at the Jean-de-Brébeuf Residence in Richelieu, Québec, during the afternoon of Oct. 2, 2018. He was 85 and had been in religious life for 65 years.

He was born in Saint-Tharsicius, Québec, in the county of Matapédia, on Feb. 23, 1933, in a family of thirteen children of whom he was the second-last. He only began school at the age of 10, after his parents decided to move to Drummondville. He did not complete his elementary education, because he had to abandon his studies at age 16 in order to begin working. He contracted tuberculosis at age 17 and was hospitalized at Sacred Heart Hospital in Cartierville for five months. After an operation on his right ankle, he was restored to health. He was hired on as a handyman with a farmer of the Drummondville region, the brother of Brother Rosaire Proulx, before coming to the novitiate of the Society, where he was admitted as a brother postulant on July 27, 1952. He began his novitiate on Feb. 1, 1953, and two years later pronounced his first vows on Feb. 2.

In his memoires, which he composed in 1996, Br. Grondin wrote, “In the Society, I have done just about everything: refectorian, shoemaker, launderer, cook, porter, guest master, and maintenance man,” In another age, the Latin term “ad omnia” was used in the Province Catalogue to describe the status of some brothers, like Br. Grondin, who were available for all sorts of tasks in the Jesuit communities where they lived. Br. Grondin spent a good part of his religious life in three communities: at the novitiate in Montréal and Saint-Jérôme, from 1953 to 1967, then at the residence on rue Dauphine in Québec, from 1968 to 1992, and again at Saint-Jérôme, from 1994 to 2009. He wanted to come to live with his companions at the infirmary, after the closure of the house in Saint-Jérôme in 2009, because his brother Elphège, his godfather, who entered the Oblates after him, was buried in 1984 in the cemetery of the community in Richelieu.

Br. Grondin was not interested only in the various works that were assigned to him. He loved to fish and during summer vacations he would spend hours in a rowboat on the lakes at Barkmere and Saint-Michel, waiting patiently for a fish to come by and get hooked on his line. In Québec especially, he would regularly frequent the flea market of Sainte-Foy, where he would reserve a table to display his treasures, in the hope that he could sell some for the benefit of the Mission Office.

Fr. Kolvenbach, our superior general, in a letter dated Feb. 1, 2003, acknowledged Br. Grondin’s golden jubilee in the Society. On that occasion, he reminded him, quoting a passage from Decree 7 of GC 34, that “the first and most important contribution of the brothers is the gift of their person, freely offered for the service of the Lord.” This is what Br. Grondin tried to live as well as possible during his 65 years of Jesuit life.

He leaves behind his nephews and nieces, his friends and acquaintances. 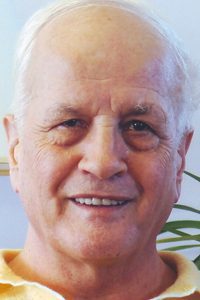