Jesuit Father Jack Hall died peacefully on March 14, 2019, at the Jesuit Infirmary in Pickering, Ontario. He was in his 73rd year and was in religious life for 45 years. Jack was born in Halifax on April 13, 1946, the son of John Hall and Florence Ross. After studies at St. Patrick’s High School and St. Mary’s University he entered the Society at Guelph on 8 September 1972. After professing his vows on 17 November 1974, he studied philosophy at Mount St. Michael’s in Spokane. Regency followed in 1976 at Loyola High School, Montreal. In 1978 he went to Regis College, Toronto for theology study. Jack’s ordination took place at St. Ignatius Church, Montreal on 10 October 1981 and tertianship was done in Austin, Texas.

Jack began his ministry as a teacher and chaplain at Loyola High School in 1981. A year later he took special studies at McGill University, Montreal, and Saint Paul’s University in Ottawa. In 1985 he was at Manresa in Pickering involved with the Spiritual Exercises and the CLC. A year later Jack helped out at St Pius X Parish in St. John’s, NL. Beginning in 1987 and for the next ten years he was in Toronto ministering at Our Lady of Lourdes Parish, directing retreats at Manresa, serving as a volunteer chaplain to the Metropolitan Toronto Police, and ministering at St. Stephen’s Chapel.

Jack then spent half a year in Halifax and then moved to the Loyola Community in 1997 where he was involved in pastoral ministry. Two years later in 1999, he was back in St. John’s on the staff of St. Pius X parish, doing spiritual ministry in the archdiocese, and chaplaincy at a seniors’ residence. After eleven years he moved to Toronto in 2010 to the community on Isabella Street. There, he was in residence, since a lack of energy and mobility problems limited any extensive ministry. His move to the infirmary came in the summer of 2014 after a disastrous fall which required intensive care.

Jack was close to his family, especially to his siblings in Halifax and in St. John’s Newfoundland and to his niece and her family in Scarborough. They were involved in his life and concerned about his failing health. Jack’s personality tended to be dramatic and exuberant. His care for the Society and the Church was genuine; his storytelling involving both institutions often brought about raucous laughter on his part. Jack’s health was a source of pre-occupation for him. He suffered physically and mentally, and a sense of frustration and confusion was evident in later years. But he always remained compassionate and zealous for pastoral ministry. 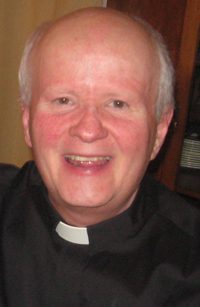