He touched the lives of many, many people — the students he taught, the Native American parishioners he served, the retreatants to whom he ministered in the Omaha area.

Let us pray in thanksgiving for the life of Fr. James H. Ryan, S.J., who was called to eternal life on July 25, 2019. Jim died at St. Camillus, in Wauwatosa, WI. He was eighty-two years old, a Jesuit for almost sixty-three years, and a priest for fifty years.

Born in Omaha, NE on January 1, 1937, Jim attended Cathedral and St. Margaret Mary Grade Schools and Creighton Prep High School in Omaha. After one year at Regis College, Denver, CO, he entered the Society on August 17, 1956 and had the usual Jesuit course of studies at St. Stanislaus Seminary, St. Louis University, and St. Mary’s College. He received an M.A. in Latin from St. Louis University and a M.Ed. from Boston University. He was ordained on June 6, 1969, made tertianship in St. Paul, MN, and pronounced his final vows on February 2, 1976.

Jim did regency at Marquette High School in Milwaukee, WI. After ordination, he dedicated himself to the ministry of secondary education from 1970 to 1984 – at Campion Jesuit High School, Prairie Du Chien WI, Boston College High School, Boston MA, and Marquette High School, Milwaukee WI (where he also served as superior of the Jesuit Community). From 1984 to 2002 Jim ministered to the pastoral needs of Native Americans at St. Isaac Jogues Church, Rapid City SD, St. Francis Mission on the Rosebud Indian Reservation, and Holy Rosary Mission on the Pine Ridge Indian Reservation. From 2003 to 2015 Jim was missioned to retreat ministry in the Omaha area and also served as the superior of the Creighton Prep Jesuit Community for six years. Jim moved to the St. Camillus Jesuit Community in 2015.

Jim grew up in a large Irish family in Omaha. He was a faithful Jesuit priest: a quiet man, a good listener and counselor, a steady presence in community. He enjoyed being a retreat director as well as a spiritual director. He touched the lives of many, many people — the students he taught, the Native American parishioners he served, the retreatants to whom he ministered in the Omaha area. 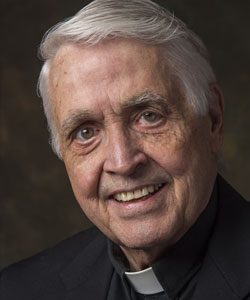