Jesuit Father James V. Schall, longtime professor of political philosophy at Georgetown University, died on April 17, 2019, at the age of 91. He had been living in the Jesuit residence in Los Gatos, California.

Father Schall was “one of the great treasures of American Catholic academics,” a writer for Catholic News Service once wrote in reviewing two of his more than 30 books: “The Sum Total of Human Happiness” and “The Life of the Mind: On the Joys and Travails of Thinking,” published in 2006.

“Throughout his career, Father Schall has been a champion of the traditional liberal arts education, with much of his work dedicated to remedying the gaps in college-level curricula that can leave even the most impressively credentialed among us strangers to history’s greatest intellects,” the reviewer said.

Besides his books, Father Schall edited or co-edited eight other volumes, wrote several pamphlets and authored essays that appeared in numerous publications, including the St. Austin Review, Homiletic and Pastoral Review, and the National Review.

James Vincent Schall was born Jan. 20, 1928, in Pocahontas, Iowa. He was educated in the public schools, graduating in 1945 from Knoxville (Iowa) High School.

Among the sources for many of the priest’s lectures were Scripture, Aristotle, Plato, Cicero, St. Augustine, St. Thomas Aquinas, G.K. Chesterton and Pope Benedict XVI. He strongly supported the pope’s critique of Western culture which categorizes it as a “dictatorship of relativism.”

“We are living in a time where the logic of disorder is at work, rejecting systematically the logic of being a human being,” Father Schall once wrote.

Father Schall was considered an expert on Chesterton; the priest edited two volumes of Chesterton’s collected works and wrote his own volume of essays on the famous Catholic convert.

He joined the faculty of Georgetown in 1977. Among his numerous honors, he was presented the Edward B. Bunn, SJ, Award for Faculty Excellence by the senior class in the College of Arts and Sciences at Georgetown in 1993, 2004 and 2010. He was named to the 1997-98 John Templeton Foundation Honor Roll of outstanding professors.

He was on the faculty of the Wyoming School of Catholic Thought held in August 2003. Run under the auspices of the Wyoming Catholic College of the Cheyenne Diocese, the school offers university-level theology classes to church leaders “seeking a revival of Catholic culture and an antidote to the culture of death.”

Father Schall had several health challenges over the years, including one that resulted in blindness in one eye. In the summer of 2010, he had a cancerous jawbone, which was removed and replaced with bone taken from his leg.

“For Father Schall, the principal job of the philosopher is to say of what is, that it is, and of what is not, that it is not. This may sound pointless, but it is essential to understanding why the human experience of recognizing the reality of something that is not oneself is so very important,” said CNS reviewer Brent Kallmer.

“Indeed, the mere realization that the chair I sit on is distinct from me is a thing of wonder and delight for the philosopher, and — Father Schall argues — we come to know ourselves by interacting with the things that are ‘not us,’” he said. “In this, the Jesuit is emphatic that we can have no better instructor than Plato: ‘Unless there is a reading of Plato, there is no university, and it is best to escape from any institution that does not know this, does not live by it.’” [Source: CNS] 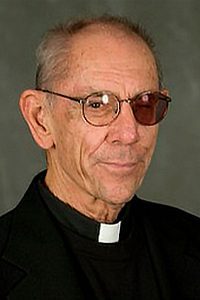