March 23, 2021 — “I feel like the whole world is crying out, going crazy, knowing that we are not together,” says Diosmany. “How is it that we can be together for ten years, committed to each other for ten years, and then the U.S., a third party can come in and tear us apart like that?”

Diosmany, still in shock, explains how he and his wife, Lidsay, were separated at the U.S.-Mexico border while attempting to seek asylum.

Both from Cuba, Diosmany and Lidsay fled political persecution in their home country. “I fear my liberty, my life, that they’ll follow through with the threats. I can’t return,” says Diosmany.

After arriving in southern Mexico in 2019, Diosmany was attacked and beaten by members of organized crime and taken to the hospital where X-rays showed broken bones in his foot. Though he filed a report with the police about what happened to him, nothing came of it. Then he started receiving threatening phone calls. Because of the ongoing danger, Diosmany and Lidsay fled to northern Mexico, arriving at the border in December of 2019 to seek asylum in the United States.

They waited several weeks on the asylum metering list in Nogales, Mexico, receiving support from the Jesuit-run Kino Border Initiative (KBI). Their claim was finally processed in February of 2020. Diosmany and Lidsay were recognized as asylum seekers by Border Patrol agents and given a court date to continue their asylum process. However, instead of being able to seek asylum from within the U.S., they were returned to Nogales under the Migrant Protection Protocols (MPP), the very country they feared.

MPP — commonly called Remain in Mexico — has forced over 60,000 migrants to wait in Mexico while their asylum claims are processed in the U.S. Stuck in Mexican border towns, most migrants lack access to immigration lawyers. As a result, only 638 people have been granted asylum under MPP as of December 2020. While President Biden has ended MPP, the administration lacks a clear strategy for processing these cases.

After being returned to Nogales, Diosmany and Lidsay continued to receive threatening phone calls. When they reported the threats to the police, they were told they had to pay a bribe for protection. “Who is looking out for migrants? Not the police, not the government. We have to pay for protection,” he says.

Diosmany and Lidsay felt completely stuck — unable to live safely in Mexico and unable to return to Cuba. “I’m fleeing two layers of persecution, first in Cuba and the second here in Mexico,” says Diosmany. “But at this point Cuba has left my mind…I focus on what’s happening now, what I feel now. Mexico is unsafe and I have been able to see just how unsafe it is — I’ve been extorted, mistreated, I’ve had to go to the doctor, I’ve been beaten by the gangs…Everyday that I am here, my risk increases.”

While they always felt unsafe in Nogales, Diosmany and Lidsay truly felt the presence of danger last month. While walking through Nogales on a Sunday afternoon, they were both stopped and questioned by several men armed and in an unmarked vehicle. When the answers didn’t appease the group, they took photos of Diosmany and Lidsay.

“I don’t know where they sent the photos or to who,” says Diosmany. “I don’t want to find out…I had already gotten calls that they [knew] where I was, that I was at the border.”

Fearing that the threats may ensue, Diosmany and Lidsay decided to seek asylum again at the U.S.-border, explaining that they were in danger in Mexico and could not remain there. After they were both detained in Yuma for three days, they released Lidsay to live with her sister in Texas, but they told Diosmany, “You have MPP. You’re going back to Mexico.”

His devastation was two-fold: he was being sent back to danger and without his wife. “I am unsafe here,” he says. “I’m afraid I’ll lose — lose my wife, my life, my family, because Lidsay is my family.”

Diosmany is one of thousands of asylum seekers who have been removed to Mexico under Customs and Border Patrol’s Title 42. Instituted at the start of the pandemic last year, this policy allows CBP to expel any migrants who present themselves at ports of entry without documentation. Many migrant advocates, including KBI, say this policy violates due process rights and uses the pandemic as an excuse to block migrants from accessing asylum.

While small numbers of migrants subject to MPP are now being processed at Texas and California ports of entry, migrants with MPP in Nogales have not received any information about when and how they will be processed. Diosmany continues to endure uncertainty and hardship in Nogales. And now he is alone.

“I thank God that Lidsay is with her sister, that she is safe,” he says. “I have been in Mexico nearly two years and I want to leave because it has taken its toll, physically and psychologically.”

To learn more about how KBI is helping migrants subject to MPP and Title 42 expulsions, join their KBI Leads Campaign. Every week KBI will share a story about people impacted by these policies, provide a prayer opportunity, and offer opportunities for advocacy.

To hear more about KBI’s work on the U.S.-Mexico border, listen to our AMDG podcast episode with KBI’s executive director, Joanna Williams. 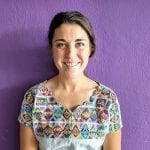 Sara Ritchie is the director of communications at Kino Border Initiative. This story was originally published on KBI’s website, here.