AMDG Podcast: Inside the Tradition of Jesuit Theater with Fr. George Drance, SJ

Back at some of the very first Jesuit-run schools in the 1500s, teachers would work with students to put on plays. This tradition was called “Jesuit drama,” and it was seen as a fantastic way to accomplish several educational goals at once. The plays themselves were in Latin, so that helped the students learn the language. Plays required memorization and skilled rhetoric, both big values at the time. And the subject matter of these early dramas were Catholic morals and doctrine, so they were seen as central to religious instruction, too. 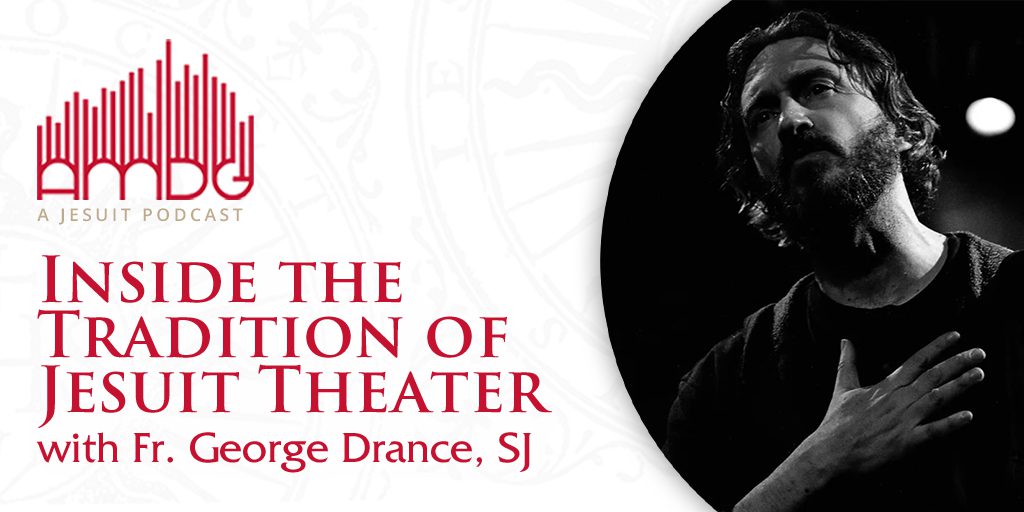 The rich tradition of Jesuits involved in theater has continued through the ages all the way to modern times, evolving and adapting through the centuries. One of the most accomplished Jesuit theater actors, teachers and scholars is Fr. George Drance, today’s guest.

Fr. Drance, who teaches theater at Fordham University, has performed and directed in more than 20 countries on five continents. He’s also the founding artistic director of the Magis Theatre Company in New York, which draws its name from that classic Jesuit word that means “the more” or “the greater.” Host Mike Jordan Laskey asked Fr. Drance about his dual vocations as Jesuit and theater artist, a bit about the history of Jesuit drama and the parallels between theater and Ignatian spirituality, how Catholic liturgy and drama are intertwined, and some of his favorite projects through the years.

Also, we wanted to let you know about two Advent resources we’re preparing here at the Jesuit Conference. The first is a daily email series called Ignatian Heroes. We have 25 fabulous writers offering short reflections on Jesuits and others who have been influenced by Ignatian spirituality. You can sign up to receive these reflections at Jesuits.org/advent22.

Then, we’re sponsoring a live Advent evening of reflection on Zoom. It’s called “Room at the Inn: An Ignatian Journey with the Holy Family into Advent.” The session will be led by the fabulous iconographer and visual artist Kelly Latimore and one of our favorite spiritual writers, Cameron Bellm. It’s on Wednesday, December 14, at 7:30pm eastern time. You can sign up for free at Jesuits.org/adventprayer.