How Ignatian Spirituality Unlocked this Father’s Friendship with St. Joseph 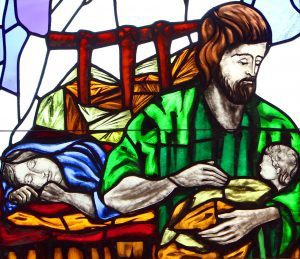 A Prayer to Saint Joseph

Hail, Guardian of the Redeemer,
Spouse of the Blessed Virgin Mary.
To you God entrusted his only Son;
in you Mary placed her trust;
with you Christ became man.
Blessed Joseph, to us too,
show yourself a father
and guide us in the path of life.
Obtain for us grace, mercy, and courage,
and defend us from every evil. Amen.

In his Spiritual Exercises, St. Ignatius Loyola instructs us to use our imagination to picture various Gospel scenes. You take it all in through your senses and then put yourself in the story at some point. Make yourself useful, Ignatius encourages. So, while praying one afternoon, I put myself at the Nativity scene in Bethlehem, and I sat on a hay bale holding the baby Jesus while Mary slept. Joseph sat next to me. He was beaming, shaking his head in disbelief with a goofy grin spread across his face. As a father of three young kids myself, I may have been projecting my own birthing room post-delivery joyous stupor onto Joseph. But there we were, two dads, marveling at the wondrous work of our wives and the unfathomable smallness of this particular child who happened also to be God.

“I have no idea what I’m doing,” I said to Joseph in my prayer. “Me neither,” he said, still grinning. I met a new friend in that moment. The biblical directive “Go to Joseph” is said of the Old Testament Joseph (Gen 41:55). But in my prayer that day, the directive took on new meaning. Here was someone else tasked with a complicated, urgent job without any sort of formal training. Joseph was offering solidarity to me and any other parent who has ever been intimidated or lost.

This prayer from Pope Francis comes at the end of his apostolic letter announcing the Year of St. Joseph, which ended in December. In the letter, the Holy Father speaks of Joseph’s “creative courage,” revealed in things such as the way Joseph turned the manger into a welcoming home for the Son of God and in his faithful response to the angel’s disturbing call to flee from King Herod and journey to Egypt as refugees. “In the face of difficulty, we can either give up and walk away, or somehow engage with it,” Pope Francis writes. Joseph engages, time after time, even when his plans get flipped on their head and he doesn’t know how things are going to turn out.

I think it was Joseph’s creative courage I saw in his grin during that afternoon of prayer. “It’s OK,” I hear him say to me now, almost playfully, as we faced the unknown together. “Just show up. Dive in. Love your family. Trust the Lord.”

“A Prayer to Saint Joseph” by Mike Jordan Laskey is from the March 2022 issue of Give Us This Day, www.giveusthisday.org (Collegeville, MN: Liturgical Press, 2022). Used with permission. 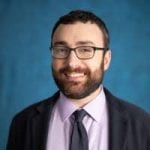 Mike Jordan Laskey is the communications director for the Jesuit Conference of Canada and the United States. He is the author of “The Ministry of Peace and Justice.”