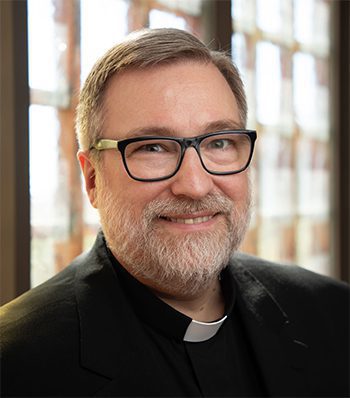 Before being appointed dean of JST in 2020, Fr. Mueller was at Marquette University in Milwaukee for over two decades, where he was an associate professor of theology and served as associate dean for academic affairs, director of graduate studies and assistant chairman for the theology department. He also represented the United States Conference of Catholic Bishops for seven years on the Faith and Order Commission of the National Council of Churches of Christ and served as rector of the Marquette University Jesuit Community.

“Joe Mueller was one of the most kind, gentle and serene Jesuits I have ever known. His deep peace was rooted in his love of Jesus and the joy of the Gospel,” wrote Fr. Brian Paulson, SJ, president of the Jesuit Conference of Canada and the United States. “Joe loved each one of his missions, especially his final mission as dean at JST, where he felt like he did one some of his best work for the Lord and the Society, and he took great consolation in this service. For his good friends, Joe was the best of friends, a spiritual rock who generously shared his love, faith, joy and laughter.”

A Jesuit for 40 years, Fr. Mueller graduated from the University of Detroit Jesuit High School and earned bachelor’s degrees in French and theology from Marquette University before entering the Society of Jesus in 1982. He was ordained to the priesthood in 1993.

While in the Society, Fr. Mueller earned a master’s degree in philosophy from Loyola University Chicago, a Master of Divinity degree from the Weston School of Theology in Boston, and a Licentiate and Doctorate in Sacred Theology from Centre Sèvres in Paris.

Fr. Mueller possessed a deep commitment to culturally contextualized theology. He was the author of the French-language book “The Old Testament in the Ecclesiology of Fathers,” which analyzed a collection of ancient church administration sources known as the Apostolic Constitutions. In his scholarly work, he specialized in the study of early Christian theologians, especially those of the first five centuries, and of ancient and contemporary ideas on the nature, structure and mission of the church.

Dr. Julie Sullivan, president of Santa Clara University, wrote that Fr. Mueller “elevated the academic reputation of JST by recruiting a cadre of noteworthy theologians whose scholarship will have a profound impact on the future of the church, and obtained significant grants to enhance Latina/o theology and ministry. On a personal level, Fr. Mueller was a kind and humble man whose thoughtful analysis, good humor and wise counsel was of great benefit to the President’s Cabinet and the Provost’s Council.”