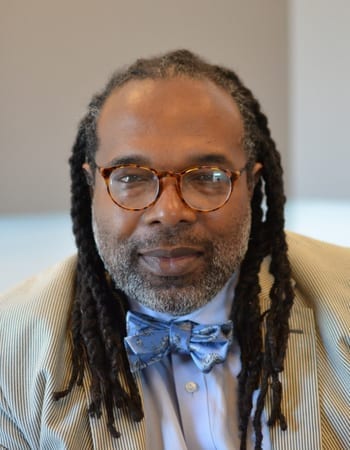 June 28, 2021 — Dr. Jonathan Smith, Vice President for Diversity and Community Engagement at Saint Louis University and a founder and co-director of the Slavery, History, Memory, and Reconciliation (SHMR) Project, passed away on Juneteenth, a day he was thrilled to inaugurate as a university holiday this year. We at SHMR mourn the loss of our beloved colleague and friend, whose commitment to making the world a better place never ceased to inspire us.

Jonathan was instrumental in founding the SHMR Project in 2016. From the beginning, he envisioned its research would not merely recount the “sins of the Fathers,” but would instead foreground the stories of people held in slavery by the Jesuits — revealing their lived experiences in all their fullness and complexity, depicting not just what they suffered, but what they valued, what they strove for and where they found joy. He sought to honor the immense skill and intelligence of people who created magnificent buildings, who made possible the growth of what we know as St. Louis and as Saint Louis University. We don’t hear about their talents, he often said; speak of them as gifted. They had dignity, they deserve respect, and they lived and made community even amidst the atrocities perpetuated against them. They were not statistics, they were not animals, they were not property; they were humans, and we need to know their stories.

Robin Proudie and her family, descendants of Henrietta Mills Chauvin, who was enslaved at Saint Louis University, shared, “We are very grateful for [Dr. Smith’s] leadership with the SHMR Project to uncover the truth and provide descendants with a pathway forward to justice.” Jonathan was committed to empowering living descendants of people who had been enslaved and wanted their voices to lead us in how we responded in all the work we did. He also emphasized the role of descendant communities in our work, pointing out that regardless of whether someone can identify their individual ancestors, every African American is living with the legacies of slavery.

Jonathan wanted people to know that examining our history should not stay fixated on the past; it should also dictate how we move in the present and transform our future. He spoke of doing “both structural and systemic work to address the legacies of racism” as we “recover the individual lives and stories of enslaved people and the richness of those stories.” And so, the work is not simply research for research’s sake — it affects how we act today as we seek to address inequity on every level and work toward racial justice.

For Jonathan, relationships were at the core of everything he did. People light up when you say his name, and his influence extended to the lives of so many. Alison McCann, a descendant of members of the Queen family enslaved to the Jesuits in Missouri, said, “Dr. Jonathan Smith was a blessing to Saint Louis University and all those around him. While my encounters with him were all too short, they were powerful and meaningful. I had barely known him and his first words to me were to ‘keep going and don’t stop.’ He was that kind of person, the kind you wanted on your side. Jonathan will be missed but not forgotten by those he touched dearly!”

Jonathan was a visionary. His prophetic ability to grasp what was happening in the present and envision a greater tomorrow was exquisite. He was not afraid to take risks in order for the truth to be told, and be told well, and he encouraged and supported all of us to be advocates, even in difficult spaces. We were endlessly amazed by Jonathan’s genius and power with words. He loved language, he loved learning, and he loved sharing. He met people where they were and brought them forward to another place. He created space for people to be better, while encouraging them to recognize the significance of who they already are.

He did all of this in the midst of an impossibly busy schedule filled with university duties and community engagement. Jonathan made time for us, caring for us as individuals and friends. He listened to our stories, to our pain, to the things going on in our daily lives. He walked with us through dissertations, roadblocks, celebrations, and was always there, beaming with pride. He gave and gave and gave of himself, and his love is embedded in some of the last words he shared with us. To Danielle, he said, “Don’t you dare dim that bright light that is you, Danielle: The world is in need of your spirit!” When Kelly told him how much we loved him, he said, “You know that I feel the same for you.”

Rashonda Alexander, whose ancestors, the family of Jack and Sally Queen, were enslaved to the Jesuits in Missouri, wrote to Jonathan, “I believe on the other side God really puts us to work. I look forward to witnessing more of your radical equitable power in this new way. You are loved and remembered. Well done, good and faithful servant.”

Jonathan challenged us to do more, to think deeply and to never give up on advocating for what’s right. We were blessed to have him in our lives. We will miss his fearless leadership, his profound insights and his huge heart. It will take all of us to continue the work he began, and his vision will continue to guide us. His legacy will thrive in the relationships he built and the work we continue to do. He would have it no other way.