What My Daughter Taught Me About Mary 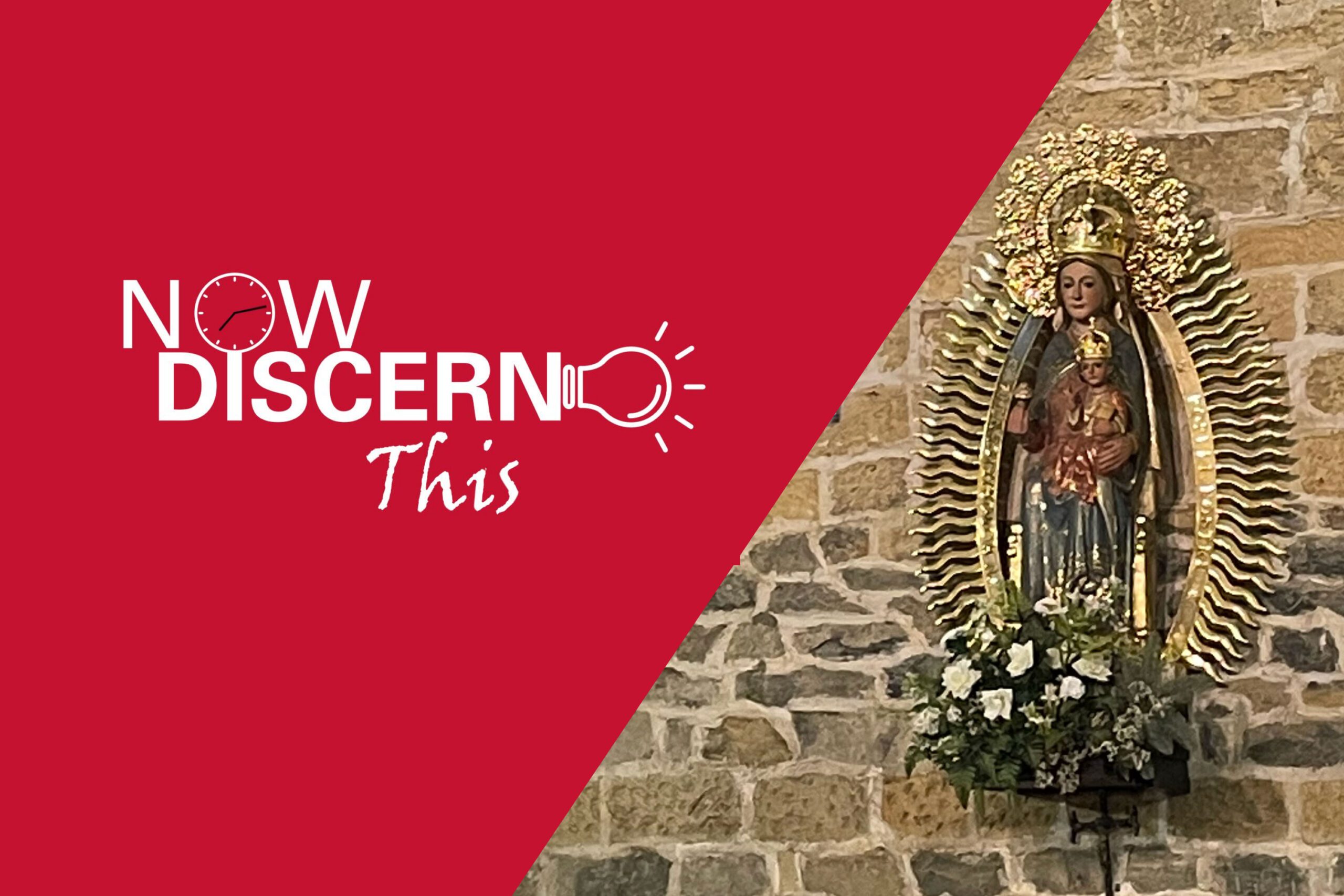 There was a point in my life when there were a handful of moments before the beginning of Mass where I could pause in quiet reflection, still and somber in my pew, considering the holy images and icons adorning the walls.

At least, I think there was.

“Take your coat off,” I implored my two-year-old puffball in a hushed, anxious whisper. “You’ll be so much more comfortable.” I glanced at the procession marching down the center aisle. “Then you can have your snacks.”

That last bit did the trick, and I spun her out of her coat barely in time for the priest to begin the introductory rites.

My eldest daughter, though, was focused on something else. While perhaps not still or somber, she was – like an earlier version of myself – studying the art.

She leaned over her happily munching sister and poked me. “Daddy.”

I finished blessing myself, attempting to maintain an aura of reverence, and bent down. “Yes?”

My daughter pointed to a beautiful stained-glass image of Mary, the middle of five towering images, flanked by the Gospel writers.

“Was Mary the leader of the world after Jesus and Joseph died?”

If I thought I was going to easily split attention between the priest and my daughter, I was quickly disabused of that idea. “Um…”

We’ve been talking a bit with our oldest about what it means to be a good leader, mostly in the context of being a good friend and sister. We’ve also continued our obsession with Disney princesses.

I knew what she was imagining when she asked that question: Was Mary some sort of all-powerful queen, wielding a scepter and directing armies?

My mind scattered. There were a number of theological corrections that might benefit this question. I’d do well, too, to clarify terms: leader, died, the world. And perhaps I should encourage my kids to focus on the Mass itself rather than let their minds wander.

Instead, I punted. “That’s a great question,” I whispered. “Let me think.”

And so, while I may not have gotten any still and somber moments of contemplation before Mass, my daughter apparently had – and had given me a real question to pray with.

Was Mary the leader of the world after the death of her husband, the resurrection of her son?

Because we do call Mary “Queen of Heaven.” That’s the fifth of the Glorious Mysteries of the Rosary, after all. That has to count for something, right? Maybe not leader of the world, but queen of heaven isn’t bad!

But again, that wasn’t the heart of my daughter’s question. She wasn’t after titles; she wanted to know what Mary did. What was her role? What should she know about the Mother of God, that towering figure in the stained glass window?

My mind went to the days my wife and I spent on the Camino de Santiago, walking the ancient pilgrimage in the steps of the Apostle St. James. James, it’s said, was the recipient of the first Marian apparition – Our Lady of the Pillar. (And, perhaps, the only recipient of Marian bilocation, as it’s thought Mary was still alive in Jerusalem at that time.) James was having a tough time in his mission spreading the Gospel to new lands.

So, what did Mary do in the days after Joseph’s death and Jesus’ resurrection? She encouraged Jesus’ friends; she encouraged the Church itself. In this way, she continued to birth Christ into the world, ensuring that all would come to encounter the God who is now and forever delighting in us.

And that holy delight – the Christ who continues to be born in our lives, through our work and relationships – is the ongoing fruit of Mary’s own life, love and legacy. If we want to talk about Mary as a “leader,” if we want to talk about her as someone with an impact on “the world,” let’s not limit her to a simple “yes”; let’s sink in to the ongoing, hard but joyful task of birthing Christ in the now – and rejoicing in Christ’s presence in the past and promise in the future.

So, what did I tell my daughter? “She’s queen,” I said. “But she’s a queen because she shows us how to follow Jesus – how to keep following Jesus. And that it’s all about love and kindness and joy.”

Eric A. Clayton is the author of Cannonball Moments: Telling Your Story, Deepening Your Faith (Loyola Press) and the deputy director of communications at the Jesuit Conference of Canada and the United States. His essays on spirituality, parenting and pop culture have appeared in America Magazine, National Catholic Reporter, Busted Halo and more, and he is a regular contributor to Give Us This Day, IgnatianSpirituality.com and Dork Side of the Force, where he blogs about Star Wars. His fiction has been published by Black Hare Press, the World of Myth Magazine and more. He lives in Baltimore, MD with his wife, two young daughters and their cat, Sebastian.